They suck. Everyone knows it. The women are cliquey, the music is bad or no one shows up and you feel like an idiot for going. It makes sense. Lesbians are a hermetic category of human being. The few times we leave our apartments, we tend to choose intimate dinners over loud, stressful parties that go into 4 a.m.

Having grown up watching reruns of Cheers, I wanted what Norm, Diane and Cliff had, except with gay girls. I moved to Brooklyn with high hopes about queer nightlife. I’d been to Big Chicks (Chicago), Mary’s (Atlanta) and Como’s (Detroit) but it wasn’t enough. I wanted the big, sprawling New York kind of party where people do drugs in the bathroom, drag queens get tipped in double digits and the spoiled children of celebrities show up in weird outfits. I knew about Cubby Hole and Henrietta Hudson but the 24/7 lesbian bar has become a relic of another era, when lesbian separatism was cool and high heels were the devil. Visiting these bars now, they’re either empty or filled with gay men. I guess with our increased acceptance, the lesbian “community” is dispersing, or maybe we’re just too busy fulfilling our stereotype as anti-social cat people.

Then, like any young queer, I found The Woods.

It sounds like the start of a fairy tale, except The Woods doesn’t lead to witches that boil children. It leads to neo-feminist witches who can read your horoscope, make kombucha and tattoo your pinkie. They’re pretty hot.

The Woods is a straight bar in Williamsburg, Brooklyn and on Wednesday nights it’s colonized by queers. The party is known as “Misster” but no one calls it that. It’s just “The Woods” as in, “I can’t believe we’re still going to The Woods.” It’s been going on for four years and people love to complain about it but not me. The Woods is the sort of place that reminds you why lesbian parties matter. 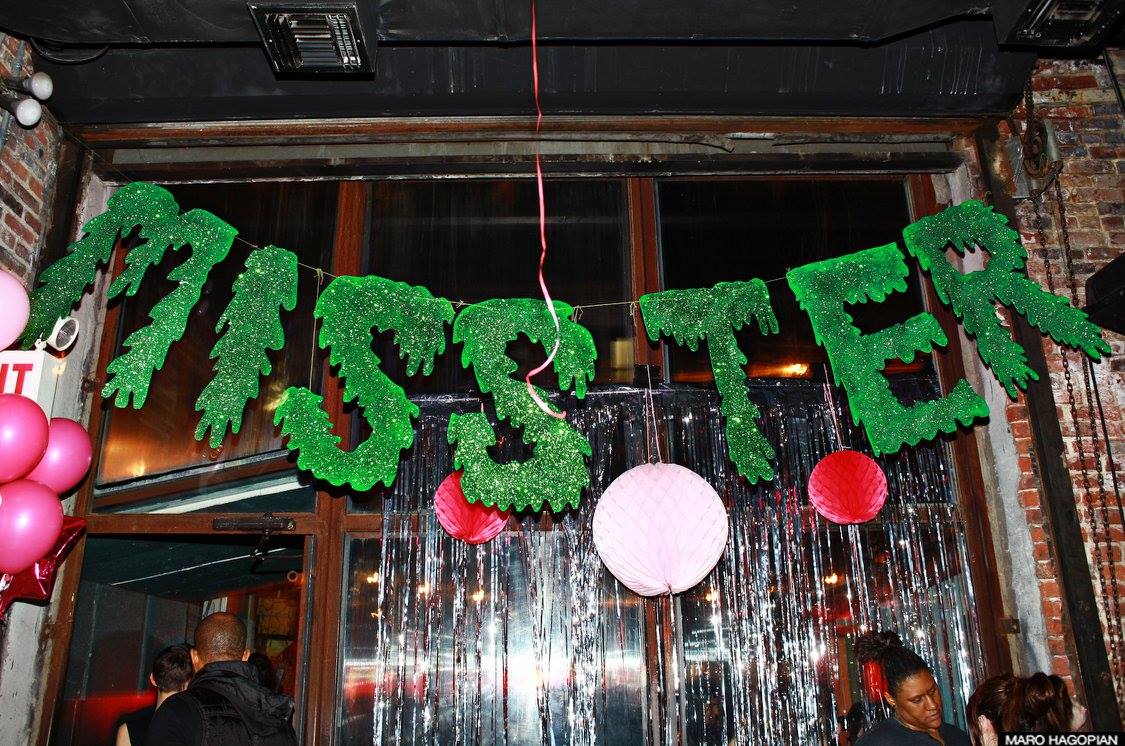 Your first time is exciting and scary because everyone is cute and they seem to know each other. The room is woman-positive and not meat-markety and you want to ask out everyone you see. This is the lesbian heaven you’ve spent your life searching for. Then you go again and again and again and it doesn’t change. It becomes like church where you don’t always want to go but if you do, you leave feeling better than you did before. Plus your friends are there and they asked you to come.

Like church, The Woods follows a specific pattern. Women arrive in packs and the time of arrival matters — 9 p.m. is early, 11 p.m. is better, midnight is best. If it’s cold, they wear beanies and if it’s not, they still wear beanies. They also wear baseball hats, snapbacks and fedoras. This is because lesbians love hats. Why? I don’t know.

The only man at The Woods that matters is the bouncer. He’s a ten-foot tall bald man and regardless of weather, he stands outside and slides IDs. I’m well over 21 and I still get nervous every time he does it, convinced he’s about to expose parking tickets or SAT scores.

Since The Woods has a reputation as a bar where any guy can pick up a girl, straight men always show up expecting the usual mating ground. The bouncer is wise enough to warn them, “You know this is a gay night, right?” Reluctant to appear dumb, the men nod and walk inside, where they are given the attention of prunes. Too embarrassed to admit defeat, they usually stay and become bored, irritable or excessively drunk. The patriarchy never looked so pathetic.

Upon entering, experienced lesbians walk straight to the back. That’s the social nucleus of The Woods. It’s where tribes of women gather at picnic tables and scope out the room through calculated, sideways glances. There is something deadly about the way women look at each other. It’s appraisal, comparison and competition rolled into one. But if you look hard enough, there’s vulnerability too. Beneath those beanies, we’re sensitive creatures seeking warmth, acceptance and maybe a date for Friday night.

While the predator-prey dynamic reigns in the back, the inside is the dorky birthday party where everybody’s dancing to Destiny’s Child. Women pile their coats in leaning towers and dance as close as they can to DJ Amber Valentine, the holy priestess of the queer parties in Brooklyn. Wearing neon tops and blue lipstick, she plays a triumphant combination of diva remixes and ‘90s pop. She DJs all around New York but Misster is the only party where she takes requests (if people are nice). She’s the one who throws the party and she really does make it fun and accessible to anyone who comes. When she steps away from the turntables, she’s upbeat but intimidating; she’s cooler than you and she always will be.

They say heaven is walking into a place where everyone you ever loved is waiting for you with their arms open. On the best nights, that’s what The Woods feels like. You show up expecting a few friends and suddenly, all your favorite people are there and they’re all happy to see you. It doesn’t matter what you talk about. What matters is the feeling you get when it’s late, you’re surrounded by friends and Rihanna is playing from every corner of the room.

Sure, the music never changes, the conversations are shallow and some women can be mean, but we go because the lesbian party is the only place where our sexuality is the least interesting thing about us. In real life, we’re always the lesbian: the woman whose nails aren’t manicured; who doesn’t go to Soul Cycle; who’s never thought about her wedding. But at The Woods we’re a sculptor, a yogi, a gymnast, I don’t know—whatever people are these days. That’s why we keep going back, and maybe we always will.

Erica has written 1 article for us.