When I first came out as bisexual, I was 20 years old. I had kissed a girl the night before, and suddenly realized that I’d been falling in love with her the whole time we’d known each other. After years of dating frat boys and jocks, that one kiss crystallized a part of my identity I’d not even known to explore. When I moved to LA after graduating college three years later, when dating apps were no longer just a novel concept but the way of life, I set my apps to match with only women (I think anyone who has ever matched with straight men on dating apps can imagine why!), and for the next five years I used the word lesbian to describe myself.

I guess I always had in the back of my mind the idea that someday, if I met the right man at exactly the right time, I might be interested in him. But that seemed to me a more distant possibility every day (especially as I actively and intentionally built a community of queer people around me, divesting from straight men and straight culture as much as one can in this world), and not a possibility I wanted to explain to every person who heard me say the word “bisexual.” My experience with coming out at age 20 had shown me that most people assumed when I said “bisexual,” I really meant “I only date men, but I’m theoretically open to the idea of a woman.” I wanted a word that more easily explained my day-to-day reality: I was a woman who dated women and that was that.

So you can imagine my surprise, and the surprise of many around me, when I began dating a man this year, one who I actually met for the first time the same year I came out as bisexual, and who, for years, was always around at exactly the wrong time — until now. Nearly nine years after I first came out, I’m much more confident in asserting my queerness and how it shows up in my life (a lot, namely!), and I’ve honestly gotten a kick out the fact that I still have it in me to surprise people, straight and queer, with who I happen to be dating. These are some of my favorite reactions to my coming out as bisexual (again!).

Well this is the big one, isn’t it? After weeks and weeks of texting this man, watching a movie on Zoom together, and talking to my friends about how I might maybe want to kiss him but only because it’d be like, sooo funny haha right? I was finally ready to admit that I might have actual feelings for him when we hooked up for the first time, a sequence of events oddly reminiscent of the arc of my original coming out! 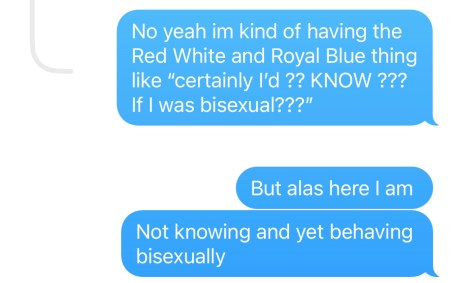 I can’t lie, the homies deserve an award for listening to weeks of me asking them if they thought this man would sleep with me, just for fun, just in a like, friends with benefits way, just because I hadn’t had sex in forever and thought we could pull off a casual relationship. A special shout-out to the (bi) friend who said “you know you can just, be bisexual, right?” when I was spiraling about whether I’d have to give up being gay altogether and whether the last five years of my life had been a lie. (They weren’t a lie, and she was right!)

When I was 20, all I wanted was for my mom to quietly and calmly accept that I was bisexual. This time, all I wanted was a little bit of drama (yes, I am a Sagittarius, yes I do live for chaos, and yes as a recovering party girl I feel I have limited options for chaos at my disposal). Instead, my mom — inured to 28 years of my bullshit and dramatic proclamations—said simply “Oh. Cool.” Parents, they always know how to do the opposite of the thing you want.

I told my grandma about my boyfriend at the same time as I told her that the two of us were going on a big group trip to Barcelona. In response she said, “well if you and he feel moved in any of the churches to get married… just wait a day and call me so I can be there.” I would have felt weirder about this, because the last thing I want from any of my (older, Mexican, Catholic) family members is to think having a boyfriend means I am Straight and Traditional now, but then I remembered how supportive she was in 2019 when I had a girlfriend and called her crying to come out to her, when she said “all I want is for you to not keep any part of yourself from me.”

When I was in a long-distance relationship with a woman in 2019, my boss at the time had been absolutely hooked on our love story updates, asking me how our visits had gone, letting me off work early when she came into town, etc. I saw him recently for the first time since then, and in catching up with me, he asked if I had “a girl in my life.” When I said I had a boyfriend, he responded, very earnestly, “Well that’s exciting!” then, flustered, “I mean, it’d be exciting if it weren’t a man too! I mean–” When I laughingly cut him off and said “yes, it’s been really exciting, though not what I expected!” he responded “Me either, obviously!”

A gal who I first bonded with over our shared lesbianism and love/hate relationship with The L Word, in a conversation about my boyfriend, looked me deep in my eye and in the most deadpan voice I could imagine said “so, what do you like about him?” Honestly, incredibly affirming when I responded and she firmly and satisfiedly nodded at my answer.

If the scariest people to come out to when I was 20 had been my mom and my straight sorority friends, the people I was most afraid to come out to this time were all the cool lesbian friends I’d made in LA. Would I suddenly lose them? Would they think I had infiltrated their ranks under false pretense? Would they [insert biphobic or exclusionary reaction here]? I built up these conversations with them in my head, imagining disappointment or distance from them, and I never felt sillier than after each time I came out to one of them and was inevitably affirmed supported and encouraged in this relationship and new facet of my sexuality. Aside from a bit with my engaged lesbian friends about how my boyfriend is imaginary (they still haven’t met him, somehow), it couldn’t have gone smoother. 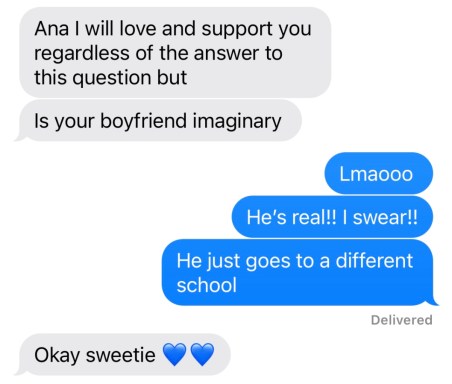 I never had to come out to TikTok, just like I never had to tell TikTok that I’m Mexican, or have ADHD, or love late 2000s hip-hop music. At first, the algorithm gave me some very relatable bisexual content, but it’s since leaned too far the other direction: suddenly I’m edging into hetero TikTok where couples seem to hate each other, where men do really wild extreme sport stunts, and where people believe Taylor Swift is completely and totally straight.

If I had one wish in this whole thing, it’s that TikTok would continue to think I’m a lesbian!

Analyssa has written 39 articles for us.