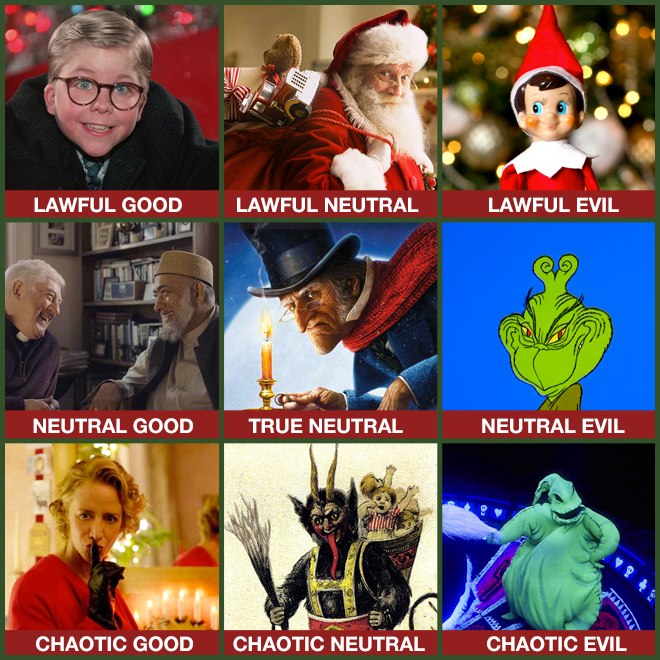 Now many people would consider you Chaotic Good, Ralphie, but not I. You go through all the proper channels for everything—you ask Santa for a gift, you’re honest with your teacher in your essay, you do exactly what Little Orphan Annie tells you to do with the decoder ring. You always follow those rules and you do it in the hope that you and everyone around you get only good, happy things. Sure, you lie about that icicle, but that was ONCE and I’ve never punished a player for a white lie.

Alrighty, you North Pole Dwelling Bastard. Perhaps no one’s blown up your secret yet, but I will. You may be jolly, but you’re not good. You apply an arbitrary and often oppressive moral code to children who are not inherently naughty or nice; they’re just kids, and they’re just learning. And often times they’re spouting whatever reindeer poop their parents tell them. So are you gonna give gifts to children who bully the gay kids just because their parents told them that was cool? Probably yes, you will, because LAWFUL NEUTRAL SUCKS AS AN ALIGNMENT THERE I SAID IT RULE FOLLOWING IS NO GOOD AT ALL WITHOUT A HEART.

Lawful Evil: Elf on the Shelf

You are perhaps the most sinister thing about Christmas, you creepy-ass elf, and that is because the only purpose you serve is to prepare children to live in our impending surveillance state. Sure, you claim to adhere to a code, but you exist only to prop up Santa’s tyranny. Let people have their autonomy and go back to the North Pole where you came from.

Neutral Good: The Priest and the Imam From That Amazon Ad

I know, I know, you’ll both tell me that you’re lawful. You’ve got a strict personal code informed by that of an organized religion. But I don’t make all my clerics play as lawful, and you clearly aren’t if you’re not letting dogma get in the way of good friendship, good people and really solid gift-giving choices.

I know, you’ll argue with me too. But I wind up good in the end!, you’ll say. But I say nay! You do only what is good for you, Scrooge, straight through the story, and you answer only to your own wants and needs. You start out greedy and your actions harm others, and you change ONLY BECAUSE those actions have an eventual negative effect on YOU. It doesn’t matter how big a Christmas goose you buy, friend. If you’re only doing it so you don’t die alone, you’re smack in the middle of the chart.

Without a bias toward law or chaos, you just want to make sure everyone has a bad time. And it makes no difference that your heart grows three sizes on that day or any other—when you rely on a little girl for your redemption while simultaneously requiring her to mature beyond her years and depriving her of a Christmas, you’re still evil in my book. And stop torturing your dog.

Hats off to you, Mrs. Claus from this Marks and Spencers ad, for standing up to your husband’s tyranny. Keeping your secrets because he’s sure to apply his law to a boy who’s CLEARLY been bad, and instead betting on that boy’s redemption with a series of badass special ops moves? Chaotic Good for you, Mrs. Claus, true hero of Christmas.

Being one of them science-loving heathen lesbian witch people, you know I love me a good frolicking demon. But Krampus, I’m sorry, you’re not lawful, no matter how much you claim to punish the wicked. I’ve seen footage of Krampusnacht—rampaging through town scaring villagers all willy-nilly? That’s no code, my friend, you just like to cause some trouble and have a party. But neither are you evil—you’re not, for instance, expressly punishing the good. You’re just mischievous. I see you

I still can’t figure out why you want to trap and kill Sandy Claus, Oogie, and I don’t think you know either. But when you’re just a whole bunch of bugs in a pillowcase, you can’t be expected to make logical, cohesive decisions. You cheat, you lie and you like filling your home with bright, flashing lights. You’re one Chaotic Evil son of a beetle.