In a surprise announcement, Judge Vaughn Walker of Prop 8 Trial fame has said that he will retire from the bench at the end of this year. He’s served as chief judge of the Northern District of California since 2004, and is best known for his ruling on the Proposition 8 trial earlier this year. He says that his decision to retire is unrelated to his now-famous ruling, and that more details about his leaving may be released in coming weeks. His letter to President Obama explaining his decision read “Concluding 21 years of judicial service, I leave the bench with the highest respect and 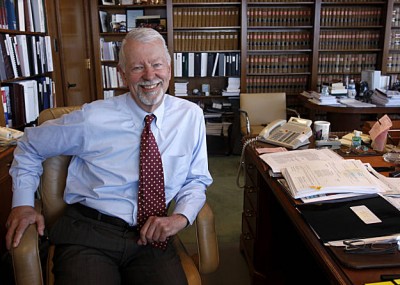 regard for the federal judiciary, its judges and their staff and the essential role they fulfill in our constitutional system.” (@sfchronicle)

Walker was nominated as a judge by Ronald Reagan and later by George H.W. Bush; he was never particularly open about his homosexuality, and both presidents would probably have been very surprised to know that he would rule for same-sex marriage in the future. Ironically, Walker was originally perceived as anti-gay, so much so that his nomination to the bench was stalled – he at one point represented the US Olympic Committee against the Gay Games. His other most famous ruling was to declare President George W. Bush’s electronic surveillance program unconstitutional, declaring that federal agents could not intercept phone calls or emails without a court warrant. (@upi)

While we wait for more news on Walker’s retirement in a nailbiting process that bizarrely parallels news on the actual Prop 8 trial, feel free to look back and reflect warmly on some of the brightest shining moments of the 138-page ruling from a man that we who followed the Prop 8 trial came to love dearly. Judge Walker, here’s to you. We wish you many wedding receptions in your future.