After last Tuesday’s reading in France and Thursday’s vote in Uruguay, it seemed the world was going crazy for marriage equality. But as it turns out, the world wasn’t finished! Gay marriage passes in New Zealand today! We won yet another thing you guys!

On Wednesday evening, New Zealand’s Parliament sat through its third reading on the Marriage (Definition of Marriage) Amendment Bill. Unlike other bills, it was presented to MPs as a conscience vote — they were encouraged to vote with their hearts regardless of their parties’ views. By the end of the evening they bill passed 77 to 44, causing the packed gallery to erupt into a Traditional Maori song.

The evening started with a heartfelt speech by Louisa Wall, the member that introduced the bill. Clad in a rainbow blazer, the Labour MP for Manurewa addressed her fellow MPs and audience members on the motivations behind Bill 39-2. Taking note of the changing international climate towards same-sex couples and families, she addressed the concerns raised by the nay-sayers and the supporters. She reiterated that religious institutions would be respected by not forcing them to wed those they disagreed with, but at the same time same-sex couples deserved a modicum of the respect that’s afforded to their heterosexual brothers and sisters. Remembering a woman that had the shocking realization that she may have no legal ties to the daughter she raised for eighteen years, Wall re-introduced the bill not as a way to push heterosexual families apart, but as a way to bring all families together.

The US President has declared his support unequivocally. The Queen has recently signed a Commonwealth Charter that explicitly opposes all form of discrimination which she describes as emphasising inclusiveness. The UK, led by their Prime Minister, has introduced legislation.

Excluding a group in society from marriage is oppressive and unacceptable. Today we’re embarrassed and appalled by these examples. And in every instance it was action by the state. This is not about church teachings or philosophy. It never has been. It’s about the State excluding people from the institution of marriage because of their sex, sexual orientation or gender identity. And that’s no different from the actions taken in these historical examples.

Law that allows all people to enjoy that state is the right thing to do. Law that prohibits people from enjoying that state is just wrong.  Those who celebrate religious or cultural marriage are absolutely unaffected by this Bill. That has never been part of the State’s marriage law.  And it never should be.

In our society the meaning of marriage is universal – it’s a declaration of love and commitment to a special person. 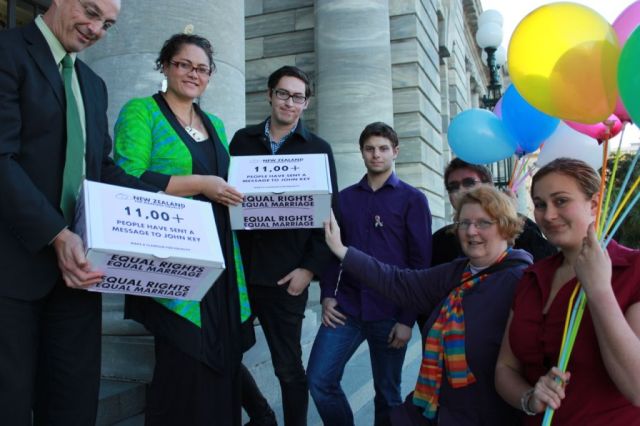 The bill ammends the Marriage Act of 1955 to broaden the definition of marriage to “the union of two people regardless of their sex, sexual orientation or gender identity.” It’ll allow same-sex couples to adopt children and more importantly, their partner’s children. Wall got the ball rolling last May when she delivered over a thousand messages to Prime Minister John Key supporting marriage equality. Wall’s bill was drawn from the ballot July 26th and made it through its first reading by a margin of 80 to 40 the following month. They accepted submissions until late October, publishing the Select Committee’s report in February of this year. The bill survived the second reading on March 13th, passing 77 to 44.

New Zealand has just joined a growing group of countries that are embracing love and acceptance over fear and exclusion. The passing of marriage equality today brings a huge benefit to many people, and no harm to anyone at all. Marriage equality extends religious freedoms, it doesn’t restrict them. When I first got together with my partner, 29 years ago, the message sent by the law could not have been clearer; we were outsiders and did not belong. Today Parliament has sent a message to the rainbow community that we do belong without having to compromise who we are. 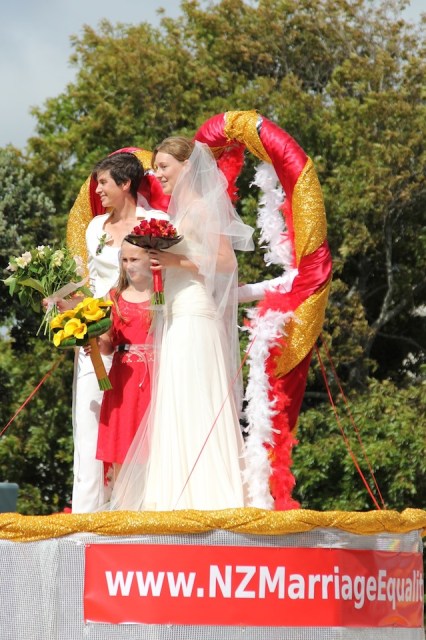 New Zealanders need to wait for Governor-General Lieutenant General The Right Honourable Sir Jerry Mateparae’s  rubber stamp (aka Royal Assent) before turning their eyes to the Department of Internal Affairs. Jeff Montgomery, the Registrar-General of Births, Deaths and Marriages says that if everything goes well,  gay August weddings are in the cards. Their four month timeline includes amending the current forms and certificates (while keeping the designations bride and bridegroom), updating the computer registry to accomodate same-sex couples and creating informative guidelines for the public.

Once all of the red tape is cleared, getting a marriage license will be a piece of wedding cake regardless of your orientation. Montgomery explains that, “A couple would apply for a marriage licence using the new form to be available on the day the Act comes into force. Three days after the completed form is received by the Department,  a marriage licence would be ready for collection and a marriage can take place.” Couples already in civil unions can wed their partners without dissolving their partnerships. They’ll submit a change of relationship notice with the corresponding fees before visiting a marriage celebrant or the Registry Office.

Although Wall has successfully cleared the way for her LGBTI brothers and sisters, she has yet to plan her own nuptials with partner Prue Kapua. Back in 2011, a civil union satisfied her needs for formality, so she is no rush to change her relationship. But if they do decide to celebrate her hard work, she won’t be the only one there as several celebrities and over a thousand Australians have promised to fully celebrate New Zealand’s win.

Two-thirds of parliament have endorsed marriage equality. It shows that we are building on our human rights as a country. – Louisa Wall