Last week, Sydney-based LGBT youth organisation Twenty10 attended Rediscover the River, a festival event in Parramatta, New South Wales, which is a large and culturally diverse suburb located about 20kms west of the Sydney CBD. They had been invited to participate, probably along with dozens of other organizations. Once at the festival, however, Twenty10 was asked to remove two “offensive” promo banners from its kite-making stall.

According to Twenty10’s official statement, on the morning of January 17 the market stall team:

“arrived early, eager and excited to be invited by Parramatta City Council to be making kites with the community… At approximately 11:00am, we were advised by a direct representative of the Lord Mayor, John Chedid, who after viewing our site and signage, directed us to remove our signage because it was ‘offensive.’”

Twenty10 decided to leave the event soon after out of concern for the safety and wellbeing of the school-aged members in attendance, as well as volunteers and staff.

When I think of content that could possibly be declared “offensive” by organisers of a family-focused event, I think of language and images that are sexually explicit, violent, racist, homophobic or in some other way inappropriate for young eyes. I don’t think of this: 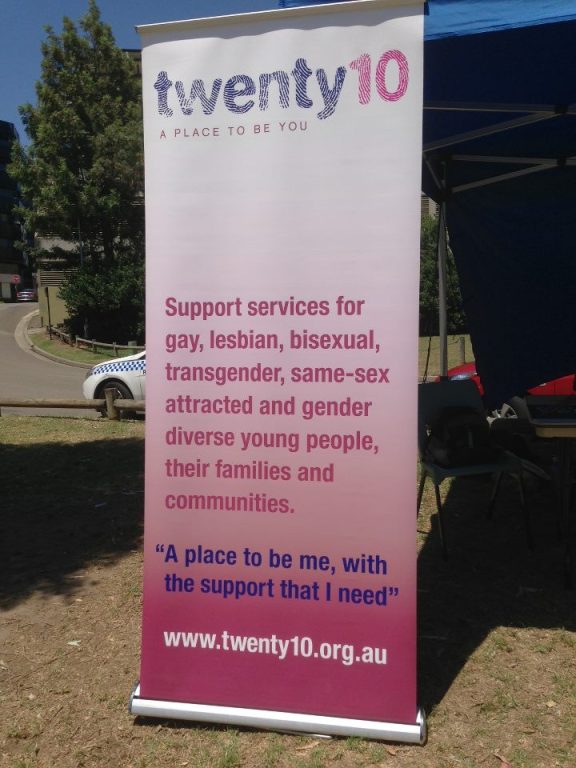 Like all good promotional banners, Twenty10’s succinctly communicates what the organisation does, which is providing “support services for gay, lesbian, bisexual, transgender, same-sex attracted and gender diverse young people, their families and communities.” According to Twenty10, the same banner has been hung at hundreds of public events and has never attracted a complaint. This is not at all surprising, since it’s an objectively inoffensive sign. It doesn’t even use clip art or Comic Sans.

In Australia, homosexuality is legal and discriminating against gay, lesbian, bisexual, transgendered people is not. With that in mind, there appears to be no valid reason for the Lord Mayor and his staff to have demanded the removal of Twenty10’s banners. Parramatta City Council’s official statement only goes as far as to state that the request was made “in response to numerous complaints made by members of the public” and that the “Council regrets any inconvenience or offence taken by its actions and values the efforts, and contribution of Twenty10 in servicing at-risk youth.” An internal communication reminded employees that the council values diversity and supports Twenty10’s mission, as well as reiterating that since the request to move the sign was based on the public’s concern, it doesn’t reflect any prejudice on the part of the council.

The Council’s failure to explain exactly what aspect of Twenty10’s banner was so offensive to the community is likely an indication that they don’t have an answer, or at least not one that won’t portray the Liberal Lord Mayor John Chedid as a homophobe (or a politician who does the bidding of homophobes, which is effectively one and the same) and/or land him in a significant amount of shit with the Anti-Discrimination Board. (It’s worth noting that the Council claims to have only “requested” that the banner be removed, whereas Twenty10 claim that they were “directed.” It’s unclear whether Twenty10 could’ve refused without consequence, although that is neither here nor there as the request never should’ve been made in the first place.)

There are so many dumbfounding elements to this story, and I’m not even talking about how Chedid prioritised the precious feelings of a handful of homophobes over the fair treatment of an organisation that’s widely respected for its work with LGBT youth. The first is that Twenty10 has had a longstanding relationship with the Parramatta City Council. It seems strange that event organisers would assign a market stall to a known LGBT organisation and then suddenly decide that it’s inappropriate for them to promote who they are and what they do.

Another kicker is that the Council’s official statement actually acknowledges that Twenty10’s youth members are at-risk members of society. Obviously the Lord Mayor and his staff failed to consider this at risk status when deciding that mentioning gay, lesbian, bisexual, transgender, same-sex attracted and gender diverse young people in a public space is somehow offensive. Way to further alienate people who already struggle to achieve a sense of belonging in the community!

Understandably unsatisfied with Council’s non-explanation, Twenty10 have called for an apology, stating that “instead of expressing regret at something that may have caused inconvenience, we’d like an apology that includes an explicit acknowledgement of what went wrong, an acknowledgement of what exactly was offensive and how can we be assured that this will not happen again.” It’s also been proposed that the Lord Mayor and his staff participate in a Twenty10 training program that looks at the sensitivities and nuances of working with disadvantaged youth.

Although it’s arguable that none of us should be surprised by any form of homophobia at this point, it’s still somewhat surprising to see this in Sydney. Sydney has long been considered one of the most queer-friendly cities in the world and it’s home to plenty of local politicians who are passionate about promoting LGBT rights and building tolerant communities. You only have to look to the City of Sydney’s Lord Mayor, Clover Moore, as an example; last year Moore had a float in the Sydney Mardi Gras and this year she proposed that pedestrian crossings along Oxford Street, in Sydney’s gay district, are painted in rainbow colours. The plan was endorsed unanimously by the council.

According to the Sydney Morning Herald, the City of Parramatta council is less unanimous in their views, at least those on this particular issue. Independent councillor and former mayor Lorraine Wearne was willing to apologise for offence but also called some responses to the event an overreaction, while independent councillor Paul Garrard stated that a family event was no place for a ”semi-political” group. Labor’s Julia Finn, on the other hand, spoke out, calling the council’s actions “disgraceful and embarrassing” and deemed the  reasoning behind the removal request to be inadequate. I’m sure most of Sydney’s population agrees. There’s a difference between the kind of “tolerance” that means LGBT communities and organizations are allowed to share space with the rest of of the community, and the kind of real engagement and solidarity that means their work and their identities are understood and respected; it seems many authority figures are able to grasp that concept, and it’s a pity that they have to be in the same boat as those who don’t.