Luther Ingram, Jodie Foster, Kristi McNichol, and Connie Chung all play crucial cameos in Beth Malone’s So Far, and that’s all in the first fifteen minutes. The Fun Home star returned to her roots at Joe’s Pub at the Public Theater in New York City on August 31st to perform a one-woman cabaret show following a rural lesbian through her tomboy childhood, an engagement (to a man!), her first stint as an actress in New York, another marriage (to a woman!), and her ever-tense relationship with her Colorado cowboy father.

Malone is slight in stature, but commands the stage with epic confidence, opening the act with Luther Ingram’s “If Lovin’ You Is Wrong (I Don’t Wanna Be Right)” — a song I didn’t know was so gay until Malone sang it. Her wit is biting, her story relatable, and her voice is like an angel’s. Using the storytelling aid of paper-plate puppets of Jodie Foster, Kristi McNichol and Connie Chung, we are transported through the countless childhood “aha” moments that should have led Malone to realize she was a big, fat, bleepin’ lesbian, but which only served to leave her confused into early adulthood. 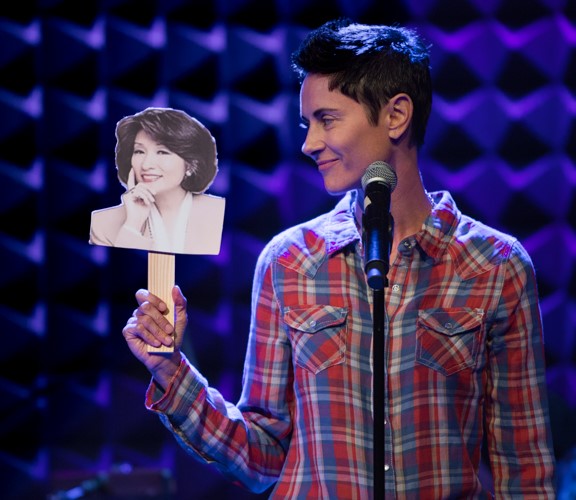 Though it takes Malone until she’s already promised to a man to finally sleep with a woman for the first time and fully realize her lesbianism, her awkward and uncertain stumble toward this conclusion is one most queer women will recognize. A smaller (though, I imagine, still quite large) contingent will relate to her tragic and estranged relationship with her right-wing, Rush Limbaugh-enthusiast father, with whom she was once inseparable.

Malone tells us about getting an on-stage kiss from Barbara Mandrell at eleven — “on the LIPS!!!” — exchanging Christmas gifts with her mother in a parking lot, and getting type-casted on the New York musical theater scene: “‘Scrappy’ is a euphemism.”

With impeccable comedic timing and an ear for the queer in almost every musical genre, Malone is able to process in one show what many people are unable to process ever in their lives. It’s a lot. So much, in fact, that we are rewarded with a short reprieve from all the feelings with a mid-show interactive theatrical break called “Ask a Lesbian a Question,” during which Malone and Fun Home book writer Lisa Kron answer the audience’s most pressing questions as can only two very sarcastic lesbians can. When asked by a gay man about lesbian “labels,” Kron says she self-identifies as a “femme, top, coupon-cutting, childless MILF.” 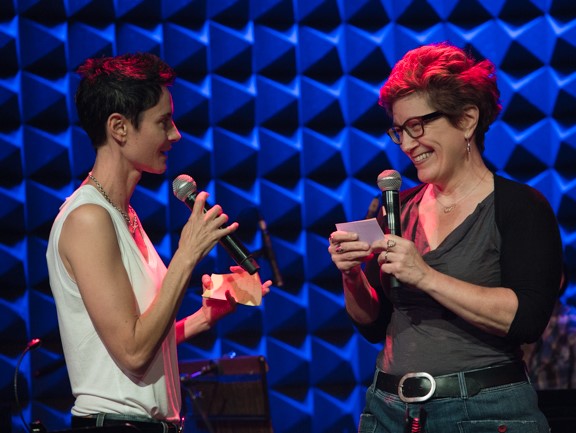 So Far was written by Beth Malone and Patricia Cotter. Musical direction is by Susan Drausstrong and directed by Peter Schneider. The show is produced by LezCab, whose mission is to “create an accurate and meaningful representation of queer women in order to foster equality and community.” They accomplish this task through the magic of theater. They also host social networking events for queer women in the theater, which can be found on their events page.