This announcement, within the first fifteen seconds of the WAP music video, is preparation for a moment for Black queer women and femmes. There is little time to prepare. In the following ten seconds, we find out that WAP means wet-ass pussy. It only gets better and more explicit from there, and Twitter turned it into a community event as we watched, and then went to our preferred streaming services to listen to the explicit version. Again and again and again. We could not stop talking about it. About WAP. About that house.

WAP premiered on YouTube, immediately following a short live with Cardi B and Megan Thee Stallion, at midnight on Friday, August 7. We thought we were ready, but there is no way we could have anticipated what they delivered. The confidence and comfort in talking about their sexual desires dripped off of them.

WAP is an acronym that is also onomatopoeia and its repetition drives the point home. Everyone with a well-lubricated experience is familiar with the sounds of a wet-ass pussy and its sonic similarity to one of our other favorite things to eat. These lines are just as likely to cause a giggle as a, “Yes, bitch, yesss, this pussy is wet and gushy.” And even if it’s not, lube can help get us there.

I am here today because I am gay pic.twitter.com/wv3nB8BTQ3

WAP goes beyond lubrication to focus on assertion of our own sexualities and that is what pulled the attention of queer people, especially Black queer women and Black femmes. The song is about what Cardi and Megan want in very specific terms. It’s not new for rap music to be sexual or for women to rap about sex, but it’s less frequent that we hear women put emphasis on their own pleasure. For queer and femme people of color who are sexualized, constantly under the masculine gaze, and judged for any display of sexuality, WAP is permission to be audacious in the pursuit of pleasure. Cardi and Megan show that queer femmes don’t have to be coy or secretive about sex. The codes and guesswork make sex difficult to navigate, especially with new partners. By clearly articulating expectations before and during foreplay, we can take control of our sexual experiences.

What sets WAP apart from many other songs in this genre is the deliberate emphasis on femme desire without trying to make it appealing to anyone else, especially men. It’s not a brag. It’s not an invitation. It’s a demand that sexual partners need to meet. A Twitter user criticized the rappers for “trying” to sound sexy and not pulling it off, but he completely missed the point. Everything women do is not for men, and that includes having and talking about sex. WAP isn’t about sounding sexy or attracting anyone. It’s about owning sexuality and being explicit about sexual desire. 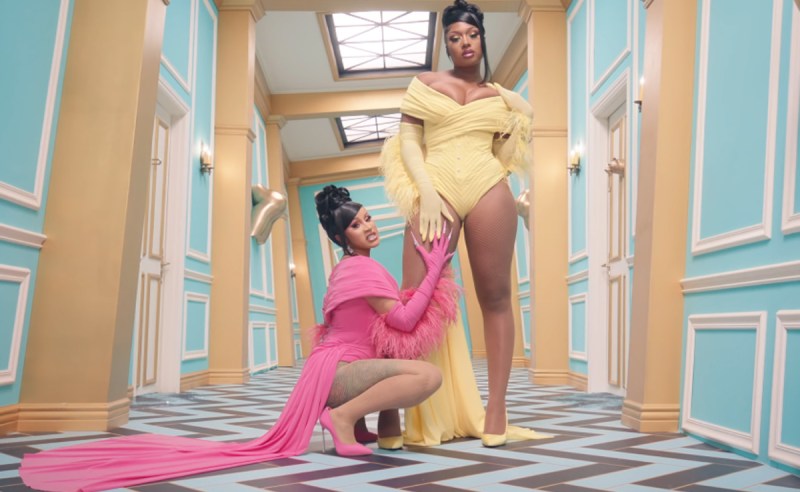 Much like “Bodak Yellow” in 2017 and “Hot Girl Summer” in 2019, WAP has already become an anthem — this time for Black queer women, femmes, and other queer people. Women of color are expected to appear demure and disinterested in sex, and WAP directly opposes respectability politics and limitations on expressions of sexuality. It rejects the idea that there is one way to be a woman and busts out of the narrow confines of “decency” and “self-respect” that only serve to reduce women to sexual objects. It calls attention to the power that exists in what many consider submissive acts and positions.

The video gave us BDE — that’s big demeanor energy. It’s set in a mansion of femme sexual energy that is both dominated and explored by Cardi and Megan — giving us strong 90s vibes wearing up-dos with side sweeps reminiscent of the iconic Halle Berry film B.A.P.S. — as they inhabit and visit different rooms giving houndstooth, red latex, and wild cats (and no, the animals were not wet). 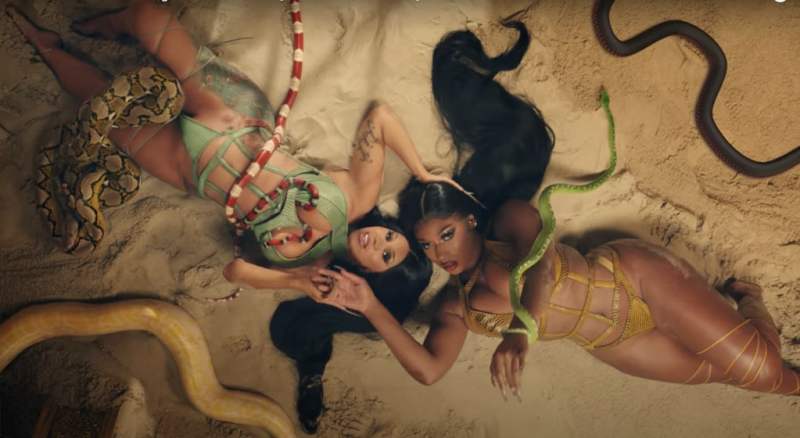 Forty-five seconds in, we’re in a WLW scene with Cardi and Meg lying head-to-head in a room of snakes. They mimic the reptiles with their arms, reaching for each other, holding hands and, of course, opening their mouths and simulating oral sex with their tongues. Women who love women were all mesmerized by the balance of sensuality and sexuality. The juxtaposition of their dominant energy and softness is a call to queer femmes to break free of misconceptions about the correlations between gender performance and sexuality. To be femme is not to lack intensity or to be submissive. Queerness gives us space to play, to find what feels good to us, and to keep looking for more, because there may not be just one road to pleasure. One day that lipstick leaves kisses all over her body, and the next day it perfectly frames the most titillating bite marks. Queer femmes reserve the right to keep ‘em guessin’!

The snake room also gives us two Black femme women together in a way that is not often portrayed in the media. We have the benefit of the lyrics to let us know they are not all caresses and tenderness, and their social media personas that tell us they aren’t quiet submissives. This is particularly powerful for queer femmes, creating space for us to play with our positions, both literal and figurative. We can be soft, we can take charge. We can balance the energy of partners or we can kick it up a lot of notches when we match it. There is no one role we have to play. As the scenes change, Cardi and Megan give us two different versions of femme sexuality, and there are even more to explore.

As the snake room and hallway scenes toggle, we get visuals of the dimensions of women’s relationships. Cardi running her hand down Megan’s thigh, Cardi and Megan dancing together like it’s a hype girls’ night, and the sensual intimacy of suggestive touch. Outside of the snake room, the sweetness is gone and it’s all about what these women want from their sexual partners. Before Megan even names it, we see the big demeanor energy in their stances, gestures, and dance moves. Even as they delight in pleasing their sexual partners, they make it clear that they retain control of their bodies, even in the most heated moments.

The lyrics do not disappoint. They’re clever, but not overly analogous. Cardi and Megan said what they said, and they said it with their chests. There were no reservations. From being tied up and roleplaying to swallowing and deep-throating, it’s specifically and explicitly about the enjoyment of sex and transforming sex into femme power.

Some of the most exciting aspects of the WAP video for Queer Twitter were the top versus bottom revelations. It is unanimous that Cardi is a top. In the leopard room, she does the splits across two chairs, references a dick going in dry and coming out soggy, and she strokes a leopard. She exudes not only confidence, but dominance. She is sitting in her sexual power over another person. In her room, Megan is in the splits on a platform, bent over with her ass in the air while gyrating, says she likes pain, and does not directly engage the white tigers.

Gonna delete this in a minute, but WAP just confirmed what Twerk told us 2 years ago…Cardi is a top.

In the next scene, they are together in the water and Megan is in the submissive position, Cardi behind her with the same energy she gave in the leopard room. This portrayal of queer femme sexuality is exciting for the community because it doesn’t exist in so much of mainstream media. We usually have to make up our own examples or use fan-fiction to ship people in order to move these conversations forward. This one has more depth and nuance because we know Cardi and Meg’s online personas so well. Because everyone stopped what they were doing to watch WAP, it was the perfect time for us talk about the range of femme sexuality and, what many find fascinating, the existence of the switch.

Cardi and Megan made their energy in the video fit the cadence and punch of their lyrics. It was the perfect balance of “I’m in charge, getting what I want,” and “Give it to me now, I’m ready.” Tops, bottoms, and verses could all see themselves and access the femme power we were called to wield.

They tell us there is joy in roleplaying, being loud, and being financially compensated for what we do with our bodies if we like. The decor alone demonstrated the limitless nature of sex and sexuality.

the fashions of black women, black queer/trans ppl, & black sex workers (from lil kim to amiyah Scott to pinky+) are the aesthetic blueprint it shows in WAP

The sprinkles on the queer femme cupcake that is the WAP video were the rooms featuring Normani, Rubi Rose, Sukihana, Mulatto, and Rosalía who gave different flavors of sexual fantasy. The regrettable part of the video was, as has been discussed at length online, the presence of Kylie Jenner — who was unnecessary, ill-equipped, and an unfortunate distraction. The other cameos gave us what we wanted and, by the time they rolled around, had come to expect from this house of femme pleasure — sexual fantasy perfectly aligned with the decor and styling of their rooms while reinforcing the rappers’ message of sexual liberation.

WAP is a moment, an anthem and, by now, a specific kind of movement. It has awakened people to the expansive nature of queer sexuality and the power of femme sexuality. It’s not one-note. Sexuality doesn’t exist for anyone else’s consumption. It’s ours to learn, develop, adapt, harness, and embody whenever we choose. Queer femmes sit in this power every day and the rest of the world is lucky we don’t unleash it more regularly. What would they do with a queer femme WAP? Imagine! WAP is creating space for us to talk about, celebrate, and demand better sex. We are already envisioning the remixes, and the future is looking well-lubricated and pleasurable.

Alicia A. Wallace is a queer Black feminist from The Bahamas. She is a women's human rights defender, public educator, and writer.