I’m the kind of person who is so spoiler-averse that I don’t even want to know what episode was your favorite before I’ve finished a show, so imagine my surprise when knowing the general story and broad strokes arc that The Legend of Vox Machina would take because I’ve seen Campaign 1 of Critical Role didn’t ruin one single second of it. Instead, I find myself delighting in things happening as expected, enjoying noticing when things change, and squealing a little when there are moments or references I completely forgot about. The Legend of Vox Machina is still managing to be both loyal to the source material while being its own thing entirely, and I am loving every second.

Also, I would like to point out that since my first review, people have let me know that Laura Bailey said on Twitter that she considers Vex bisexual during Campaign 1 (I watched C1 in the gap between C1 and C2 so I missed all the casts tweets about it) so from now on I’m considering her a queer character unless it’s explicitly stated that it’s not the case for the animated version. Because I can. 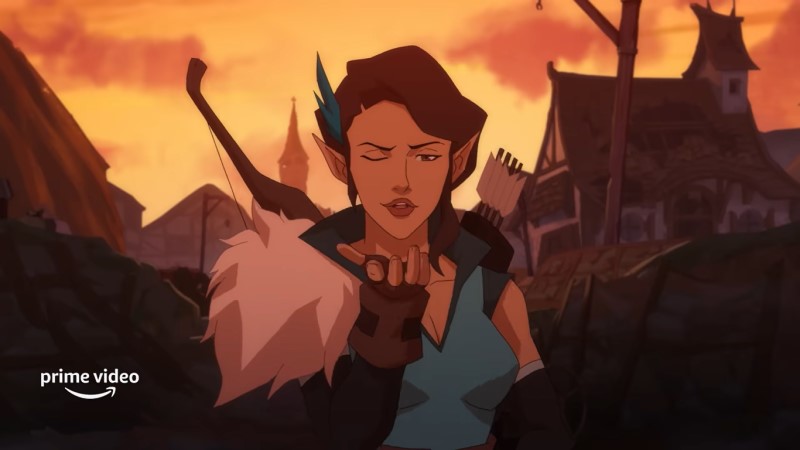 This also makes all the Vax/Keyleth jealousy more interesting because it’s not only being protective of her brother but also maybe a bit of maybe she has a crush on Keyleth, too.

Episode 4 opens in the wake of the Briarwood face-off, and Uriel is threatening to arrest Vox Machina for making a ruckus. They manage to convince Allura the Briarwoods have Uriel in some kind of thrall, so instead of being tossed in the dungeons of Emon, they are put on house arrest.

Vox Machina tries to use this time to debrief on what the hell just happened, but when Keyleth asks Percy about the smoke that came from him while he was threatening the Briarwoods’ coach driver, he insists it must have been gunsmoke. He tells them instead about how the Briarwoods were invited to Whitestone but then proceeded to take over, killing everyone. Percy’s family was tortured, until he and his sister Cassandra made a run for it. And unfortunately, he was the only one who got all the way out of the city.

Percy tells the party he’s going back to Whitestone, and they think it’s pretty funny he thinks he can get rid of them that easily. They try to sneak out of the keep through a secret passage, where we learn Pike still can’t access her magic. Keyleth tries to make light instead but can’t quite get it.

The guards find them at the end of the tunnel, and separate them so they don’t try sneaking out again. This was a sweet little moment to learn more about some of the characters in a way that’s hard when they’re traveling in a pack of 7. Pike tells Grog that she can’t reach the Everlight, Keyleth tells Percy that she is expected to return to her Ashari people after she proves he’s worthy, Vex and Vax consider sneaking out on their own, just the two of them. But then Delilah Briarwood raises some shadowdemons and sends them after Vox Machina to get back the book they stole.

I love the way they’re animating battles. Everyone has their skills, and there’s often a moment where things look like they’re not going well until it takes a turn. 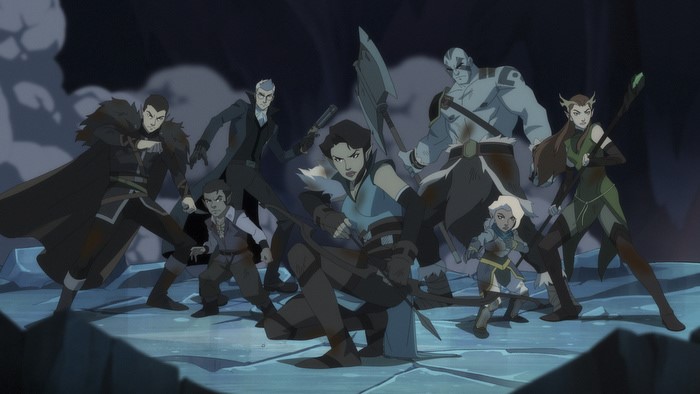 This isn’t a shot from this particular battle but I love a group number and just LOOK AT THEM.

In this particular battle, when they realize the shadows are afraid of the light, and Pike still can’t make any, Percy tells Keyleth to prove she’s worthy and she makes a mote of sunlight. Exposed to the light, the rest of the party’s hits finally start landing and they’re able to take out the demons and hold onto the book.

The guards realize this is above their paygrade, and let Vox Machina head off to Whitestone, but Pike has a journey of her own to go on, and heads off to a Temple of the Everlight instead. And this is another perk of this animated series; for those who don’t know, during the actual play of the first campaign, Ashley Johnson was often filming Blindspot in New York and couldn’t always make it to sessions. Sometimes someone else at the table would “drive” Pike if Ashley was just going to be gone for a session or two, but there were stretches where Ashley was MIA so Matt would send Pike off on a mission. But the thing about Ashley Johnson not being available, is that we never got to see what Pike was getting up to. But now we can! And we also never knew what Vox Machina didn’t know before, but now we get to see things like the Briarwoods plotting. It’s very good, is what I’m saying.

When Pike says goodbye to the party, she tells Keyleth that she’s their light now, because they are determined to rip my whole heart in two, I guess.

One of my favorite little easter egg moments in this episode is when Vex, Vax, and Keyleth break into Gilmore’s for supplies, and Vax is eyeing the inventory, saying, “Dagger, dagger, dagger…wooden stake.” It was a clever way to get Liam’s gameplay catchphrase into a version of the story where the characters aren’t verbally telegraphing their action during a fight.

On the way to Whitestone, the party is attacked yet again, this time by awful demogorgon-looking demon dogs (shoosuva, I believe), who manage to get the Briarwood book and destroy most of their new anti-vampire supplies.

This is another point where we get to see the Briarwoods, and this time they’re talking about residuum, rituals, and their plans for some villagers who think they’ve won some kind of prize. And this is beautiful foreshadowing that I somehow missed. But in retrospect? Chef’s kiss.

When they make camp for the night, Vox Machina bonds over their strangest kills, which are also some little nods to Critical Role moments. And later when Vex and Vax are collecting firewood together, Vex warns him about being distracted by “pretty things.” He’s noticed that Vex seems to appear with a snide remark every time he and Keyleth are friendly, but he assures Vex it’s nothing to worry about. Vex warns him that vines have thorns, but he thinks some things are worth the risk.

As they approach, Percy tells his party about Whitestone, but when they reach the city limits, it’s not the lush, green paradise Percy described. Instead it’s run-down and depressing, and even the Sun Tree, so important to the city that it’s part of the de Rolo crest, has bare branches.

They set off to find Keeper Yennen, the holy woman in town, but as they approach the Sun Tree they see seven bodies hanging from its branches. Seven bodies dressed up like the seven members of Vox Machina. The episode ends with Keyleth saying simply, “It’s us.”

As Vox Machina tries to avoid the zombie giants and the creepy guards that stalk the town, they find the Resistance. They’re lead to Keeper Yennen (voiced by Gina Torres) who is giving speeches about hope in the town square. She’s glad to see Percy again, and tells him that his old friend Archibald was captured for being the leader of the resistance. Knowing they have no choice of organizing a horde of villagers without him, the party sets off on an escape mission.

Meanwhile, Pike arrives at a temple and tries to explain about the curse she thinks she’s under. But after a meditation ends in no Everlight, only fire, the holy person there tells her that there’s no curse on her. If Pike can’t connect with the Everlight, it’s for some other reason.

After some classic don’t split the party/back door team jokes, Vox Machina makes two groups and tries to sneak into the dungeons from both sides at once. Keyleth can’t resist freeing the other prisoners despite Vex’s hesitance, and it’s luckily they do because they’re quickly set upon by guards. They lose some rebels, but with all their fighting and teamwork, including Keyleth turning into her saber-tooth tiger form (Minxy), they manage to stay ahead of the fight.

Percy finds the man in charge of the prisoners, Stonefell, which happens to be one of the names etched into the barrel of his gun, along with the Briarwoods. Percy pulls on his plague doctor mask, smoke emits from him, and he kills Stonefell, causing the name to disappear from the gun.

On their way out, Percy goes on a rant of being the last living de Rolo, but like how Kara never was the last daughter of Krypton, Percy is not the last de Rolo; Cassandra is still alive.

This delights Percy but maybe that’s because he doesn’t know something we do: Cassandra is with the Briarwoods.

I continue to find this series super fun to watch. It has some great fantasy battles, lots of A+ swearing (I want Vex saying “shut the fuck up” as a ring tone), and, as I mentioned, a really enjoyable combo of nostalgia and newness. Things have been dark lately but this show is helping me find enough light to cast out some of the shadow demons. I can’t wait to see what this motley crew gets into next!