Back in 2020, Pulitzer Prize winning playwright, Katori Hall, brought her stage play, Pussy Valley, to the small-screen and it quickly became one of our favorites. The show (dubbed P-Valley) returned for its second season earlier this month and it’s already claimed its spot among my favorite shows of this year.

P-Valley is, ostensibly, a workplace drama set at The Pynk, a strip club in the fictional town of Chucalissa, Mississippi. The ensemble includes Mercedes (Brandee Evans), the veteran dancer, who’s saving her earnings at the Pynk to start her own business; Miss Mississippi/Keyshawn, the Pynk’s up and coming talent looking to level up, while avoiding the wrath of her abusive baby daddy; and then there’s the new girl, Autumn Knight (Elarica Johnson), who flees to Chucalissa after the floods and hides in plain sight at the Pynk. The new season introduces a new employees at the Pynk: Whisper (Psalms Salazar), Roulette (Gail Bean) and Big Bone (Miracle Watts). But the heart and soul of the Pynk — and everyone’s favorite character — is its nonbinary owner/manager, Uncle Clifford (Nico Annan).

It’s hard to overstate what a revelation Uncle Clifford feels like for nonbinary representation, particularly for a show that’s as rooted in blackness and Southern identity as P-Valley is. Having spent most of my life in the South, I can tell you that Uncle Cliffords exist — they exist in my family, my town, my state — and, yet, we take great pain in pushing the Uncle Cliffords of the world to the periphery. Even as we see a rise in the number of nonbinary characters featured in television and film, many of them exist on the periphery as well. But not Uncle Clifford…oh, no…she is center stage! She is strutting around her club in a bustier and cape and getting her whole life… and not giving a shit about what anyone else thinks.

“Uncle Clifford shows the world, the haters and the supporters, that you can say what you want to say about me, you can feel uncomfortable, but I’m gonna be my damn self. She shows all of us a way of walking authentically in the world,” Hall told Entertainment Weekly.

Gifted the former juke joint by her grandmother, Ernestine (played exquisitely by the great Loretta Devine), Uncle Clifford struggles pull The Pynk out from under an avalanche of debt. Content to let The Pynk die under that mountain of debt? The leaders of Chucalissa, who want the land the Pynk is sitting on for a casino that stands to “revitalize” the town. But Clifford refuses to give up her legacy without a fight so she ramps up events at the club to bring in more money and aligns herself with an unlikely bedfellow to thwart the mayor’s plans.

But the casino isn’t the only threat to the Pynk’s survival: the show spends the first episode of its second season devoted to showcasing how the Pynk and its dancers survived during the pandemic. Strip clubs like the Pynk were forced to shut down in COVID’s wake and because of an obscure federal regulation that prohibited supporting businesses of a “prurient sexual nature,” clubs were ineligible from receiving federal funds. It’s a rare glimpse into the inner workings of adult entertainment but also, a rare look into how working class people — both inside and out of the Pynk — were impacted by the pandemic. Some girls try their luck online, while Clifford sets up a drive-thru show to keep the Pynk afloat. But even once the governor’s order comes to re-open, COVID remains a perpetual threat to the Pynk’s existence…and the casino developers stay ready to pounce when that threat is realized. 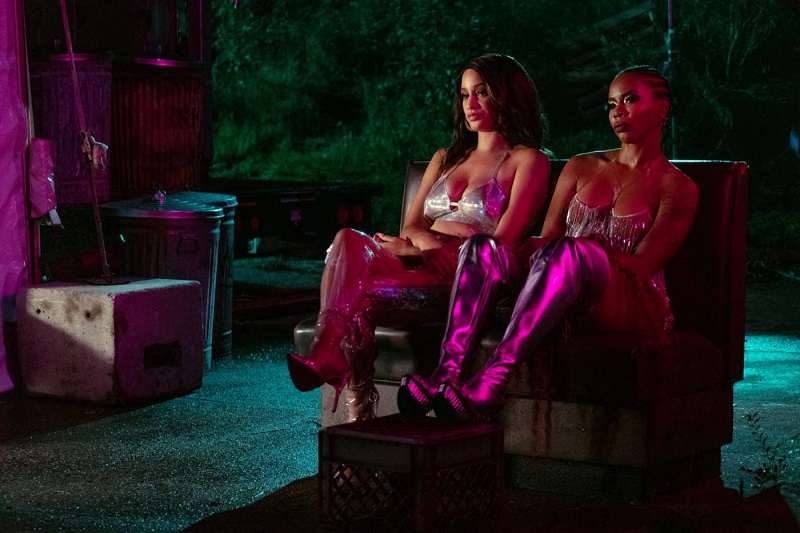 In the wrong hands, P-Valley could have gone very, very wrong. Historically, television — or hell, Hollywood writ large — hasn’t been kind in its depiction of sex workers. Likewise, Hollywood has historically reaffirmed the stereotype of the oversexualized black woman. But Hall navigates that thin line deftly: recruiting an all-female team of directors to ensure that the show’s focus remains on the women, not the men who consume their work…as the theme song proclaims, “These niggas grind hard/ But these bitches grind harder/ Climbing up the pole/ Just to get out the bottom.”

There’s an emphasis on foregrounding the work the ladies of the Pynk do, as work and the deft acrobatics of their sets, as skill. Their sets require practice — however begrudgingly for the new girls — and it’s not a skill that everyone possesses (this season’s tryouts make that abundantly clear). The camera’s focus stays on the performer putting the audience in her shoes. We see her muscles strain and hear her grunts, as she pulls herself up the pole.

But while I’ve been pleasantly surprised by how deftly P-Valley has walked that tightrope, some events of the new season are worrying. During the show’s first season, Uncle Clifford unveiled “Rule #67: ‘Contrary to Chucalissa belief, ain’t no hoes in this house!'” or Rule #1729 “Closed legs still get fed.” At the time, I chalked the rules up to Clifford’s efforts to ensure that the Pynk avoided running afoul of law enforcement — who, in tandem with the town’s leadership are looking for a reason to shut down the Pynk — but, this season, it seems to be veering toward whorearchy in a way that undermines the show’s strength.

For example, during her birthday celebration, Uncle Clifford takes a shot at her friend, Nineveh (played by trans activist/actress Toni Bryce), for their recent arrest for solicitation. Nineveh’s reaction suggests that it’s not the first time Clifford’s taken shots at how she survives in this world. That brief interaction isn’t the last we’ll see of the Pynk burgeoning whorearchy, as “hoeing” becomes an issue for multiple characters this season. I’m anxious to see how the show contends with the issue — if Clifford stands by Rule #4 “You hoe, you out the do'” — and if it avoids denigrating folks who engage in other kinds of sex work.

P-Valley airs Sunday at 10PM on Starz. If you want to catch up on the first season, you can stream it — without a Starz membership — on Prime Video throughout the month of June.