The 2009 VMAs: Only the Moments Alex Wants to Recap

by A;ex
I can’t remember the last time I watched the VMAs. I was so over it like Katherine McPhee. However, Lady Gaga can make me go to or watch anything if she’s going to be there (See: my pilgrimmage to Dinah Shore ’09).
Needless to say Gaga did not disappoint. No sir! I’ve had ‘Paparazzi’ stuck in my head all day and I’m totally fine with that. What can I say about Lady Gaga’s VMA performance besides that it was pretty much perfect? She’s … no, I won’t say “FIERCE!!” even though I want to. She’s fearless and it’s entertaining, unpredictable, insane, weird, and an ironic reflection of our obsession with fame itself. God, my love for this woman is eternal.

SPEAKING OF GOD AND ETERNITY: 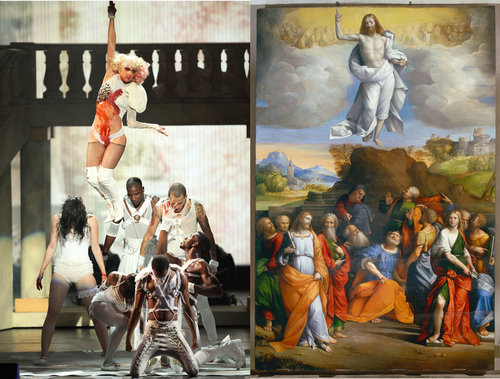 The other highlight of the night was obviously the tribute to Michael Jackson. We start with a sincere (and so very plastic surgery-ed) Madonna recounting her relationship with the icon, which was actually really nice. Then obviously ‘Thriller’ starts to which Riese comments:

“Oh my god. If they’re doing thriller I might as well just kill myself after this. My life is complete.”

I thought maybe the guy in the front was Travis from SYTYCD. Totally not. The dancers were some of the hottest choreographers in the industry: Dave Scott, Cris Judd, Brian Friedman, Wade Robson, Tyce Diorio, Travis Payne, Jeri Slaughter, Laurie Ann Gibson, Mia Michaels and Tina Landon.
That’s an impressive list even though I couldn’t spot them all. (Mia Michaels, what?!)
Also, that was too short. Where was ‘Beat It‘? It’s fine, I won’t complain. Janet killed it and it may or may not have brought a tear to my un-emotional eye ball. 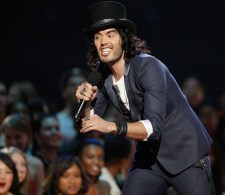 (In addition: I can’t decide if I like this guy or not. He makes terrible jokes about date rape and manly parts (“I feel assaulted by Russell Brand’s penis” – said Riese) yet defends Lady Gaga against the hermaphrodite rumors saying that of course we can’t have a strong, talented, sexually assertive woman without calling her “a bloke. That’s sexist!” he yelled.)

On Kanye West: “You know what he should’ve done? Sat in the crowd and shouted “YOU LIE!!!” -Riese 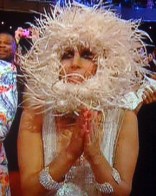 Riese did a great Taylor Swift impression: “I never thought I’d ever win one of these awards! Until last night when I wrote that check…”

Kid Cudi was wearing a t-shirt with his own name on it. Just saying.

I have a lot to say about Ashley, of course, but before we even move beyond the first sentence I must type these words: CANDIED BACON JAM! Kevin Gillespie, you have brought tears to my eyes. Is it like apple butter, but with bacon instead of apples and onions instead of cinnamon?! Or something?? I need more things like this in my life.

Last week’s episode of Top Chef: Las Vegas was clearly Ashley’s attempt at keeping me in a state of sheer panic for 50 minutes. The High Stakes Quickfire was A) about snails and B) stressful, because the losing chef would be sent home.

While Keven was smearing bacon jam all over a plate and winning thousands of dollars, Adorable Ashley was making snails even less appetizing by putting them in a soup.

The Sudden Death Quickfire had Ashley, Jesse and Robin making itty bitty apps in hopes of not being eliminated. Jesse was eventually sent packing, which was kind of sad because I think she and I would have a lot of fun talking about our crazy families. She looks like she probs has a crazy family, no? Oh and also Adorable Ashley was adorable when she was talking about stuff and cooking and things like that. Tuxedo t-shirt! Giant glasses! SIGH!

“I think that whoever thought that a snail looked good to eat had to be really fucking hungry.” –Jen Carroll

For the Elimination Challenge, chefs had to prepare classic French meats and sauces for very important French men. Are there no female chefs in France? Why is it always French men? Whatever, Ashley was paired with Mattin so I thought I could breathe a sigh of relief but nooo. Mattin doesn’t want to use asparagus in the fancy French sauce, ok? It’s not something he wants to do. He’s opposed. Ashley concedes, way too quickly and kindly for my taste [pun!], and of course the French dude and Ms. Adorable prepare one of the judges’ least favorite meals. By some insane miracle of poorly-cooked steak, Adorable and France are spared the guillotine of justice [too dramatic?] and Hector was eliminated instead.

I think the lesson here is always listen to the cute lesbian. Always. Unless she’s cooking snails? I don’t know.

In honor of the 2009 MTV Video Music Awards, this week’s challenge was for the crews to recreate iconic VMA performances. 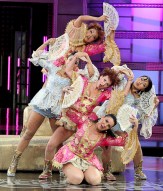 We Are Heroes
Challenge: Vogue by Madonna
As the only crew left that I love forever, I am hoping they make it to the final two. I thought their performance was solid and even though JC was underwhelmed, Shane and Lil Mama loved it. If they get kicked off next week, I’d like to say I give up on this show but I’m pretty sure I already did two seasons ago. Nothing surprises me anymore.

See the video of We Are Heroes performing “Vogue”
+
+ 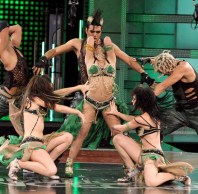 AfroBorike
Challenge: I’m A Slave 4 U by Britney Spears
The judges absolutely loved this performance and acted as if they didn’t expect AfroBorike to kill it. I thought it was great but I wasn’t blown away. The crew may have trouble being consistent but when they’re hot, they are HOT. Luckily, they seem to have put their bad performances behind them and are stepping up to show everyone how it’s done.

See the video of AfroBorike performing “Slave 4 U”
+
+ 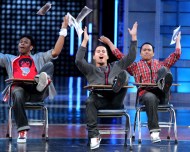 Massive Monkees
Challenge: Tearin’ Up My Heart by ‘N Sync
Okay Massive Monkees, you win. I have nothing bad to say. The performance was incredible. The energy level was so high and everything was so fast-paced, I couldn’t help but love it. After this routine, I believe that they deserve to be in the top two. It’d still kill me to see yet another bboy crew win ABDC but like I said earlier, nothing surprises me anymore.

See the video of Massive Monkees performing “Tearin Up My Heart”
+

Challenge:Wall To Wall by Chris Brown
I’ll be honest, it wasn’t their best performance but I still don’t understand how they ended up in the bottom two. Week after week, Rhythm City has killed each challenge and for them to not be battling it out in the final two is an idea I can’t wrap my head around. The whole season I just assumed they’d be the ones to beat but of course I never get what I want on this show. I think the comment I wrote in my notes for this performance sums up my feelings nicely: “WahhhhhhhhhhhhhhhhhhhhhhIHATEEVERYTHING.”

See the video of Rhythm City performing “Wall to Wall”
+
+

2009 MTV VMAs: Beyoncè did her Fosse-inspired Kanye-approved Single Ladies dance with a flock of similarly significantly quadriceped killer dancers and we loved the hell out of that shit. Lady Gaga changed outfits every seven seconds, Madonna spoke demurely about the man who died and left her queen, Pink was not only sober, but doing trapeze in a purple bodysuit, Janet Jackson killed “Scream” with all the fury & the fierce & the heart of her legendary brother and the family that made them both, Alicia Keys was classically amazing, Katy Perry grabbed her crotch and she liked it, and we felt obligated to include Taylor Swift even though we are wondering why she won’t tell anyone who she voted for in 2008.

This is for God and the gays!.

Before you go! It takes funding to keep this publication by and for queer women and trans people of all genders running every day. And A+ members keep the majority of our site free for everyone. Still, 99.9% of our readers are not members. A+ membership starts at just $4/month. If you're able to, will you join A+ and keep Autostraddle here and working for everyone?
Join A+
Related:Gleeglee season onetelevisionarytrue bloodtuesday televisionary