Welcome to the 18th recap of the second season of Faking It, a show about shipwrecks transformed into luxury resorts inhabited by teenage wearwolves, from the network that brought you Is She Really Going Out With Him?

We open on the sun-speckled lawns of Blue Oasis High School For Kids Who Never Go To Class, where Karma and Shane are verbally sparring when they run smack-dab into Wade. He seems to have picked up on the fact that Karma and Shane would rather spend the afternoon knitting themselves into a straitjacket for Yarn Arts than spend time with each other. 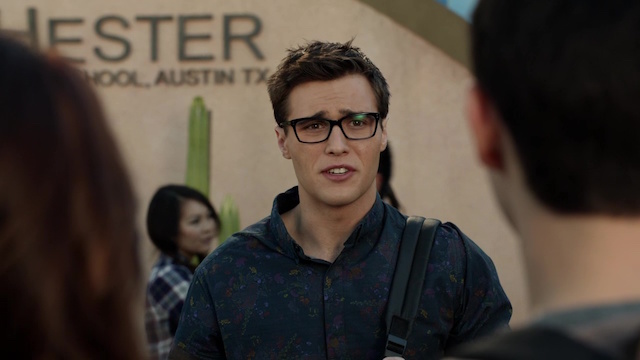 Do y’all know of anybody on campus who could help me come out in the most uncomfortable and life-scarring way possible? 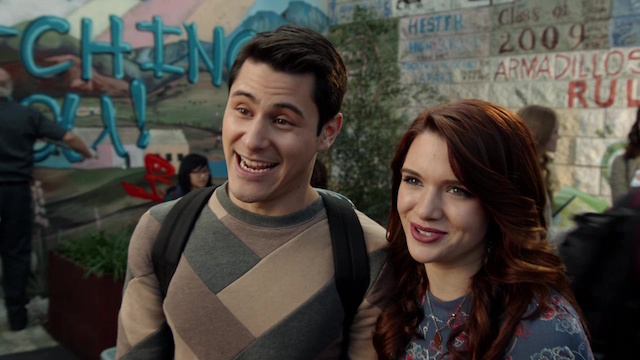 This is your lucky day!

Wade suggests that maybe the triple-date isn’t such a good idea but Shane and Karma, whose names sound way too much like Shane and Carmen for me to not mention that at least once, insist they’re just bickery-bantering all the time like little friendly birds on a tree who love each other’s company and think fondly of one another naked.

Wade: So you guys are, you’re cool with each other?
Karma: Uh, cooler than cool! We are really close!
Shane: So close in fact that we’ve kissed! Because… I’m attracted to girls sometimes too!
Karma: Me too! I have kissed girls.
Shane: One girl, singular.
Karma: But like, a bunch of times!

Yeah Wade should probably ditch these yahoos and go find himself a nice age-inappropriate date instead like all the other kids at this school. I hear Penelope Delia Fisher’s schedule is wide open!

We cut to Ye Old Dress Shoppe, where Karma and Amy are shopping for The Perfect Dress for The Perfect Evening. Amy’s not yet told her Mom she’s taking a boy to prom, lest she get as excited as I am despondent about the possibility of Amy sliding back down the Kinsey scale. 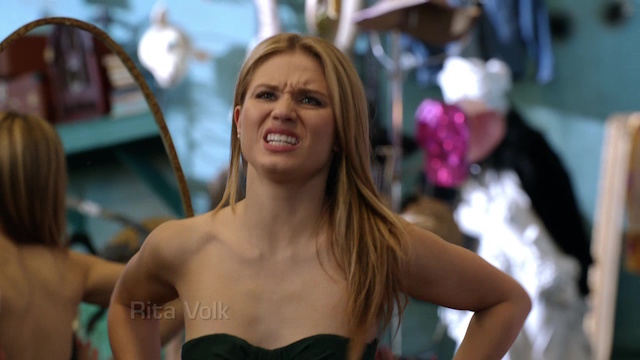 Ugggh can someone help me get this spider out of my butt?

Karma wants a dress with a V that goes down to her V so she can beat Shane at his A-Game but also really truly honestly because she likes Wade so much! He seems super great. Amy presses Karma on whether or not she’s actually okay with Wade being into girls and guys, and Karma surprisingly calls her out:

Karma: OMG Reagan I didn’t realize you were here.
Amy: Low blow. But okay, point taken.
Karma: Unlike your close-minded ex-girlfriend, I’m totally cool if Wade wants to swing both ways.
Amy: In the course of a single night? 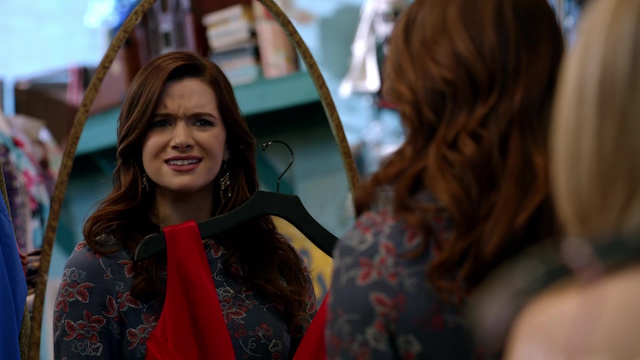 Uh yeah, I’m pretty positive that I’ll be the prettiest princess at the ball

Meanwhile, Shane remains firmly in denial that Wade could actually be bisexual, forcing Liam to once again be The Good Guy and call Shane out for acting like guys can’t be bisexual, which’s a really sexist belief (as is the belief that girls can’t be 100% homosexual). But Liam’s not opposed to Shane bringing his A-Game to Lauren Junior Prom — anything to keep his precious Karma off the market. 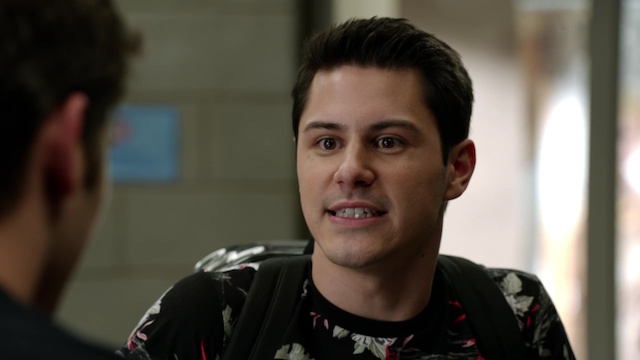 Liam, I have to bring Wade his lunch. 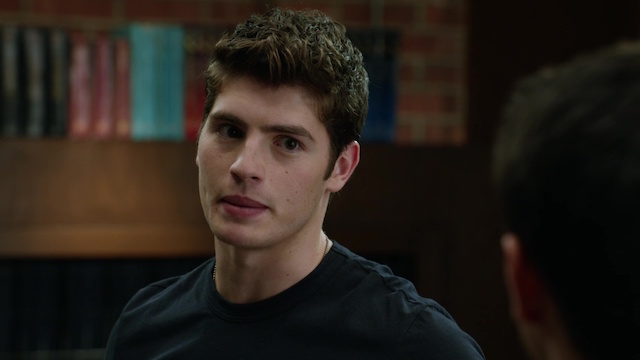 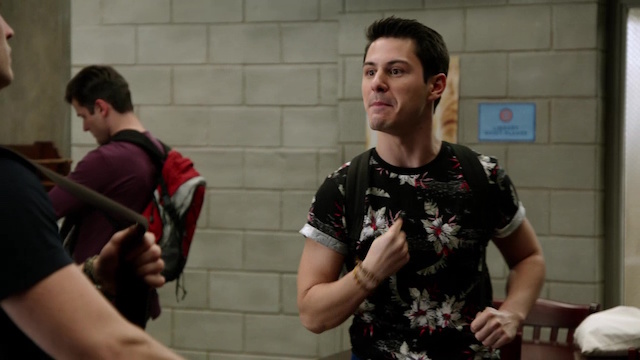 Liam, I need to bring him his lunch. 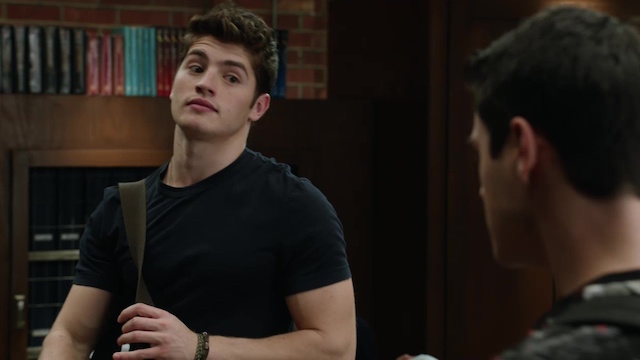 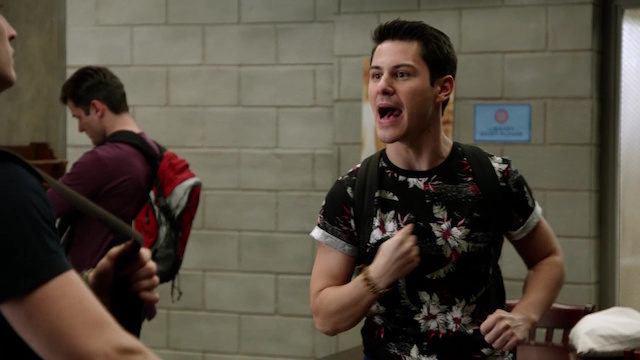 Sasha shows up for brief banter with Liam regarding whether or not she’s trying to sneak him into the sugar shack, and we all get buried alive, rise from our graves, and proceed to the next scene.

Lauren’s annoyed with Anthony for being annoyed about Tommy taking her to Lauren Junior Prom, and Anthony’s somewhere in the general neighborhood of getting her to consider forgiving him when he slips up and calls prom “a dance in the gym.” 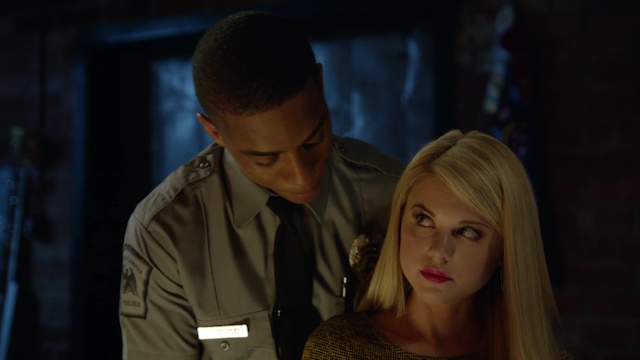 Lauren insists that Lauren Junior Prom is a crucial right-of-passage. I’d argue it’s world’s most overrated dance in the gym, but that’s neither here nor there, and besides, Lauren has stuff to get to, so she reminds her boyfriend that she REALLY wishes she could go to Lauren Junior Prom with him, but she can’t, because he’d lose his job, and then she exits the building.

Back at Chez Fawcett, Lauren tries her damndest to teach Tommy to dance while Amy tries her darndest to give herself a manicure, but he’s dumb as rocks and Amy’s hopeless with a bottle of polish, so Amy resigns to just-fucked-a-girl-on-her-period hands and Lauren and Tommy resign to spending the afternoon looking at poses on Pinterest. 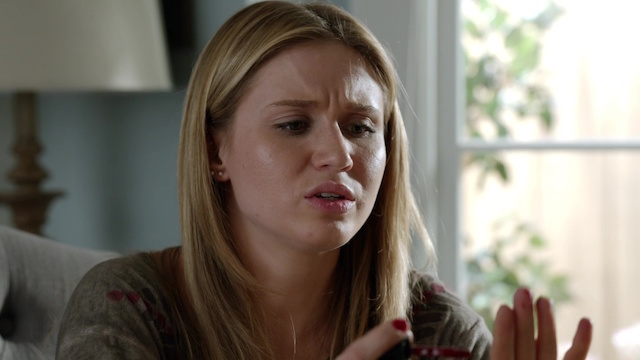 I just can’t decide what looks better, Haute in the Heat, Jelly Apple or Tomboy No More 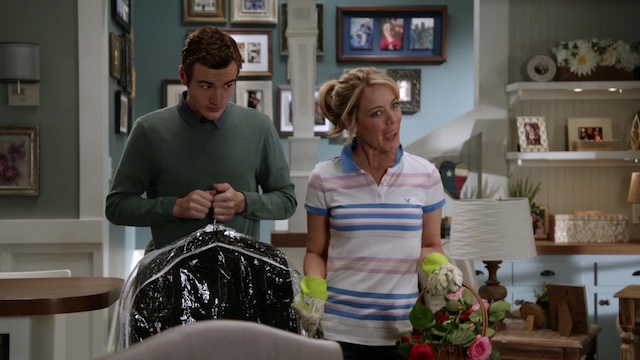 I was in the garden when I noticed this gorgeous young buck creeping behind a maple tree and I thought why not invite him right on in for some Buffalo Fried Pickles?

Amy: I tried really hard to get her to accept that I’m not straight and now she’s probably in there picking out our wedding china.
Felix: If you don’t mind me asking, if you’re not straight, then what are you?
Amy: Allergic to peanuts? And labels? I’m sorry.
Felix: Hey, don’t apologize. We’re teenagers, we’re not supposed to have all the answers, right?

Felix needs Amy’s crucial fashion input on his suit, and she picks the jokey powder-blue option, warning him that she’ll be adjusting her strapless dress all night long. So I guess she went with the strapless dress. 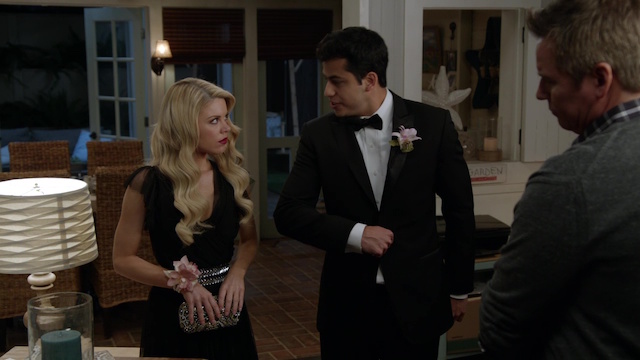 Shhh. You promised not to tell anybody that Catwoman has hired me to be her new sidekick, Catgirl

Amy, it appears, hasn’t gone with the strapless gown after all. The last few dates I went on with guys, I dressed as “gay” as possible — baggy jeans, men’s shirts, etc — like I was daring them to notice that I wasn’t dressing for their appreciation, like yes, I am on this date with you, but I am NOT on a date with the patriarchy! I have no idea what I was thinking, really, it seems stupid and non-sensical in retrospect but, anyway, that’s what I thought about when Amy shows up in this: 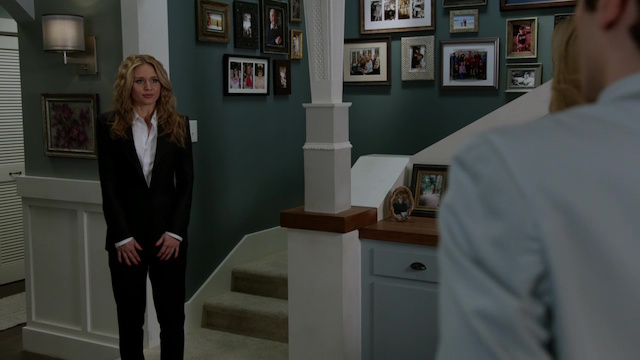 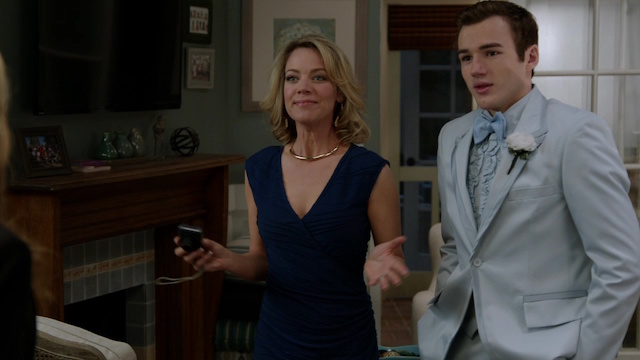 You couldn’t save the Portia De Rossi costume for Halloween, honey?

Felix is into it, though, because he’s a Good Guy and he Likes Amy, likes her enough to do jokey poses that’ll land somewhere between “what her Mom wishes she was taking pictures of” and “what her Mom is actually taking pictures of.” But it’s also so awkward, like when he points out that she’s still holding his hand and then she pulls away. This is, categorically, a bad idea, this date, but she has to go with somebody. AND APPARENTLY SHE IS THE ONLY NOT-STRAIGHT GIRL AT THIS ALLEGEDLY LIBERAL SCHOOL IN AUSTIN FREAKING TEXAS. 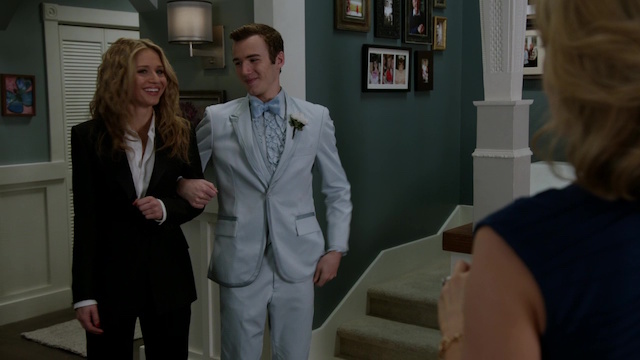 What do you mean “get closer”? I feel like we’re pretty close already.

Apparently Prom By Lauren Junior Lauren Prom’s decorations were not delivered and displayed in the Hester High gymnasium as requested. Instead the room’s been done over to look like the very overpriced Aquarium Restaurant we visited on a recent trip to Nashville, Tennessee. It was in a mall and a 14-year-old lesbian was singing Christian rock right outside and her mother was in the front row crying and it was very intense. Anyhow, Lauren seems to think this problem is still fixable. 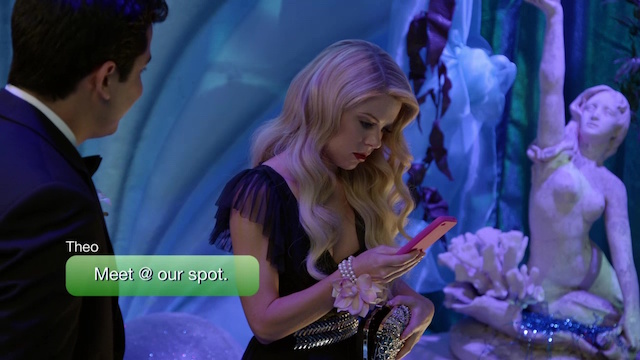 Hm, maybe I’ll try Earlybird for this one

Shane and Karma are pissed that they both wore red, and Wade’s gotta piss, and Shane’s gotta go with, since the bathroom is the one location where he can monopolize Wade’s attention. 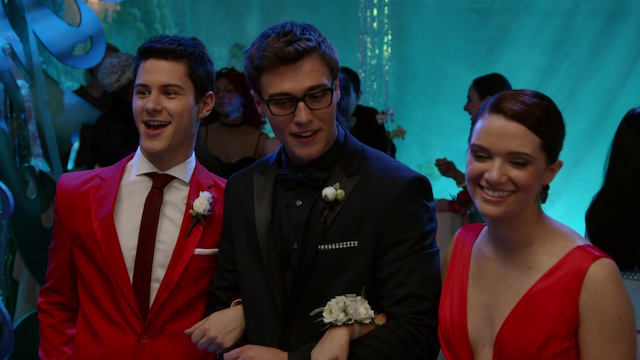 Liam’s there with his skeleton, inspiring Karma to snark that apparently he’s “already screwed everything with a pulse,” and Turner to lament the fulfillment of his fantasies of a traditional prom experience: “Skeleton dates, thruple dates, heck there’s a pig and a ficus tree here on a date!”  What’s next? A girl on a date with another girl? Stay tuned! (Spoiler alert: nope) 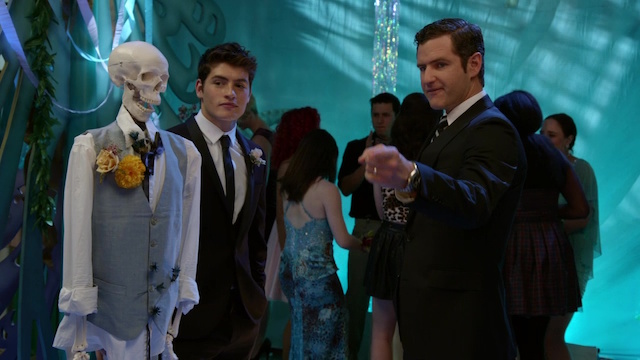 Now THAT, that over there? That’s what I call true love 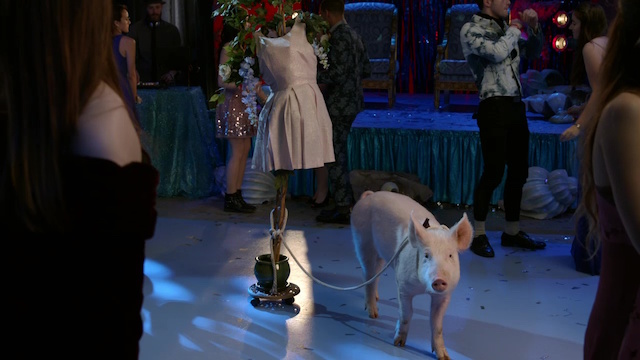