This fall, an anonymous group of trans* and gender-nonconforming students degendered public bathrooms at Wesleyan University in Middletown, Connecticut. The students removed existing gendered signs and replaced them with inclusive, all gender paper signs like the one below. 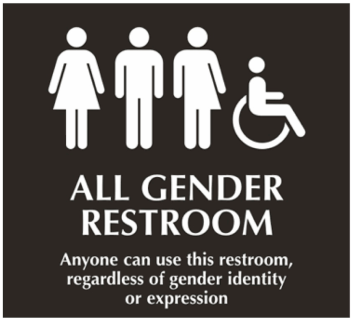 Many signs also included a manifesto, penned under the pseudonym “Pissed Off Trans* People,” calling for Wesleyan administration to desegregate bathrooms and acknowledge the existence and value of trans* and gender non-conforming people:

We demand that Wesleyan University stop segregating bathrooms along gender lines and provide all-gender bathrooms in all buildings in the University.

We resent statements by Wesleyan Administration that all-gender bathrooms are widely available on this campus, when they are in fact often difficult to find or unmarked, in inconvenient locations, or simply not available.

We acknowledge that some people, particularly women, may feel unsafe in bathrooms that are no longer gender-segregated. We invite further discussion about this issue, but are currently not aware of any studies suggesting women are more likely to experience harassment or harm in all-gender bathrooms. (Citation: Rothblatt, Martine Aliana. The Apartheid of Sex: A Manifesto on the Freedom of Gender. New York: Crown, 1995.)

We believe it is not the duty of trans* or gender-variant students to self-advocate for all- gender bathrooms on their hall/place of residence, and that residential bathrooms should be all-gender.

We want to remind white and documented people and people with class privilege that those most likely to experience violence and increased surveillance from gender- segregated bathrooms are people of color, poor people, and undocumented people.

The group uploaded the signs and manifesto so that individuals could participate on their own. According to the press release from Mariama Eversly, the materials garnered over 200 downloads.

In response to this activism, Wesleyan administration singled out three students and charged them with hefty fines and unspecific charges. In spite of evidence that these students were only “present at the sign removal in the campus center, they are being charged for the removal of all the bathroom gender signs on the entire university campus.” The three students are being charged $5,245 in fines, $157 per sign “plus additional unexplained fees.” According to the press release, the disciplinary proceedings have been “chaotic and isolating,” with the administration indicting these students based on singular evidence extrapolated in order to make an example out of them.

MyDoorSign.com has offered to replace some signs for free with all gender inclusive signs like the one pictured above, but Wesleyan administration is still charging the three students for all signs.

The controversy at Wesleyan is symptomatic of larger problems in current public consciousness: the knee-jerk tendency of people in positions of power to freak out when established cultural gender norms are questioned without thought to the ways in which we could all benefit from progress and change; the hostile, excessive and often violent response to student activism from administrations; and the anti-intellectualist conservatism rampant in America. This is par for the course as far as history is concerned, but we can do better. What’s also troubling is that when it comes to disciplinary action taken against students, elite universities like Wesleyan often disregard class issues involved. Wesleyan’s population is made of students from wealthy and working class backgrounds. Whereas $5K is payable for some families, for others the fines may be too much. As of now, there is no indication that the administration has even taken this into account.

Wesleyan’s over-the-top response comes at a time when trans* access to bathrooms has made headlines all over the country. Earlier this year, California approved a bill requiring K12 public schools in the state to allow trans* students access to bathrooms that correspond with their gender identity. Campus Pride released their annual list of the “Top 25 LGBT Friendly Colleges and Universities,” giving weight to those institutions that offer gender-free bathrooms. Even Washington D.C.-based Starbucks have gone gender-free. Bathroom access is a basic need for everyone, including trans* and gender-nonconforming people. It’s time for Wesleyan and other institutions to show respect to their students and their identities. It’s time to stop punishing students for doing important activism work and opening eyes to progressive possibilities. And it’s time for people in authority to stop digging in their heels and admit that maybe our norms are fucked up.

Wesleyan alumni are currently circulating a petition to urge the administration to do the right thing and step up in support of trans* and gender-nonconforming students.

Though the school considers the de-gendering of bathrooms to be property damage and vandalism, far more destructive are the conditions which gave rise to the students’ actions. Wesleyan must recognize the root cause of the actions: a climate in which trans students feel silenced, unwelcome and unsafe. Rather than punish the very people who are being harmed, Wesleyan needs to look at how it can create a more inclusive campus. Those people and institutions preventing some community members from feeling safe are not under investigation nor being held accountable. Rather, only those standing up for a safer campus have been sanctioned.

According to Wesleyan alum Una Osato, more than 225 alumni from all over the world have signed the petition.

Many alumni have written in saying how upset they are to hear that the current students are going up against the same issues they themselves organized around 10 or more years ago, which painfully shows how the school has not seriously taken into account the needs of marginalized students. This is not an isolated incident just happening to trans student activists. This is happening institutionally; just last year our alma mater got rid of need-blind admissions.

Osato said she was heartened by the response from the alumni, and by how decentralized the grassroots organizing has been: “It’s really about a climate on campus and supporting a larger struggle for social justice.”

The Wesleyan disciplinary hearing is set to take place Wednesday, December 4 at 4:30 p.m. EST in the North College administrative building.

If you want to find gender inclusive bathrooms, Safe2Pee.org is a crowdsourced listing of gender-free and trans*-friendly bathrooms across the U.S. and Canada.