When you “collect” things, it means you’re entitled to more of them than is practical, treasure them irrationally, and display them wherever the f*ck they look best in the house. Once I realized this, I began “collecting” things so that I could, well, have things, which matters a lot to me because of that whole not having things thing that is my entire life. But I’m starting to realize I’m not a connoisseur of anything so much as just a total fucking weirdo. 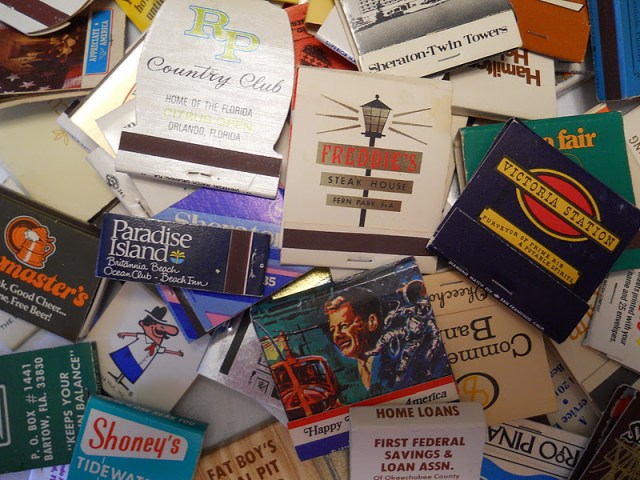 Restaurant matchbooks. Business matchbooks. Blank-cover matchbooks. Matchbooks I didn’t even get myself, but instead have collected through other people in an attempt to live vicariously through them.

Just so we’re all clear, I can’t light a match to save my life.

9. Totally Unremarkable Pokemon Stuff From When I Was a Kid 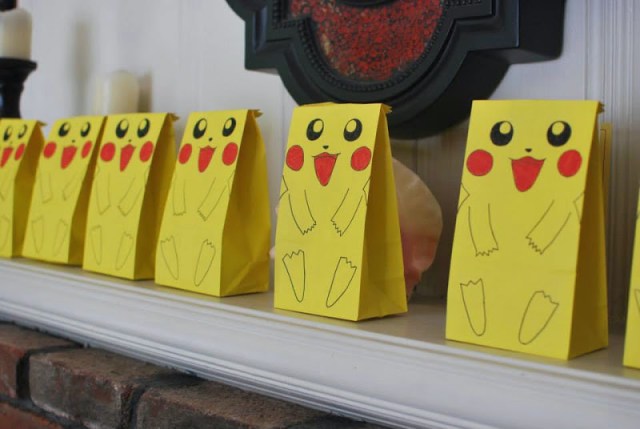 Inside of a vintage suitcase (see below) in a closet under the stairs in my house there is a metal tin I bought for a dollar as kid with photos of Eevee and their evolutionary forms on the front. Inside of it are a bunch of energy cards, a Pikachu toy from Burger King, and a plastic goodie bag with Ash on the front from a party I went to in 1999. Inside that plastic goodie bag is a piece of a tablecloth from that party.

When it comes to hoarding, I think Pokemon merchandise might be my root. 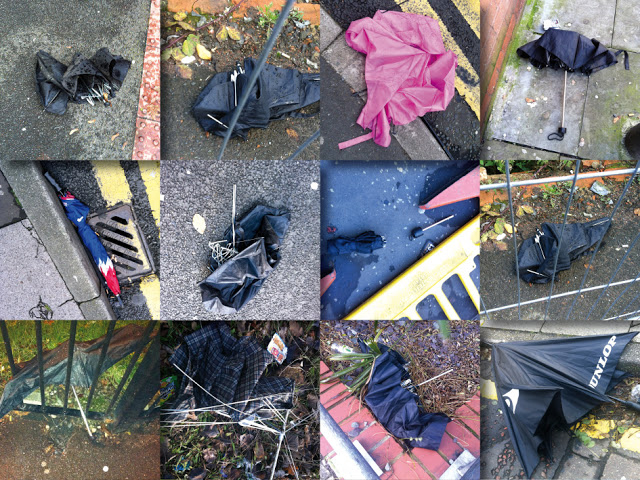 This is the cover image for my forthcoming memoir

Why can’t I just get rid of these? Why have I packed and moved three to five completely broken umbrellas with the rest of my crap across this city for seven years? Will there ever be a time I find myself surrounded by all these umbrellas when I actually need them to protect me from falling water outside? (This is a trick question, because none of the broken umbrellas are ever going to save or protect me. One stabs me when I carry it around because the cover has come disconnected from a loose metal stick, two are half caved-in, one is no longer secure and would probably blow apart within seconds of a storm.)

Also, a note to umbrella makers: DO BETTER. 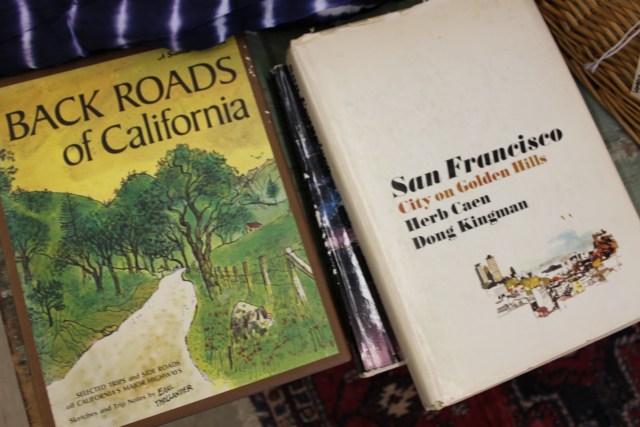 I still believe these could come in handy, or at least be really entertaining once I can look at them and think “ha! I know better!” But I also believe I might have enough of them now.

6. Mugs, Just Any And All Mugs 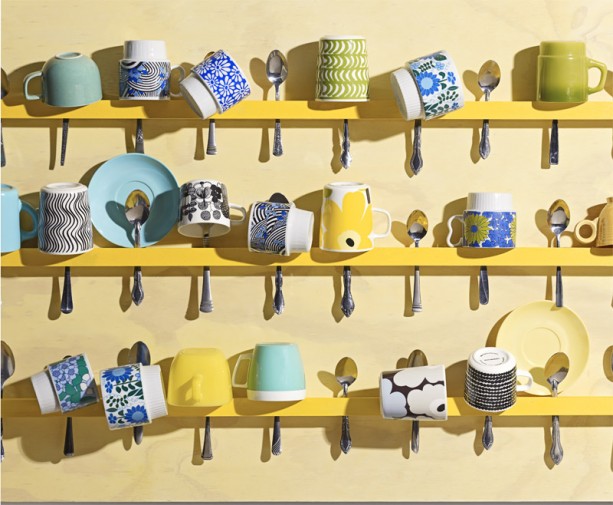 A rough list of the mugs I can’t say goodbye to: 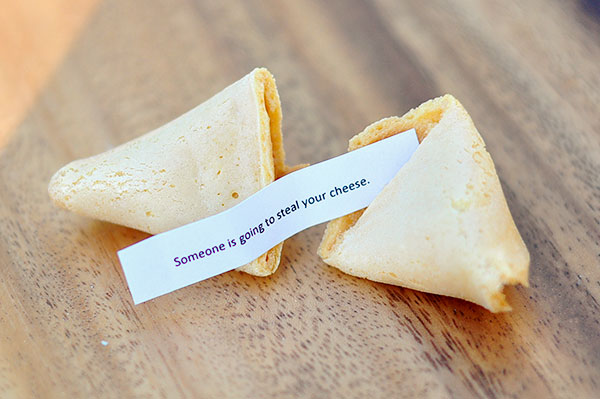 In a shot glass on the ledge in my room is a two-shooter filled with small strips of paper. At home in New Jersey, I keep them in a sugar dish. The important thing is, I’m never going to need to think of my own lottery numbers. 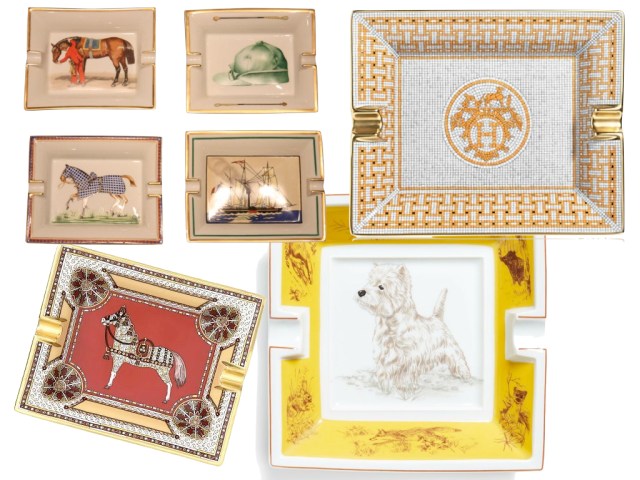 I rarely remember to use an ashtray when I’m smoking, but I always have one on the nearest table. I usually go to thrift stores and buy them because they’re the cheapest thing I can pick up there that feels like the past. I have one pink ashtray that matches my pink china, one yellow metal ashtray I keep next to my bed, a vintage steel turtle ashtray, a vaguely casino-themed ashtray I think a child made for an unappreciative adult who then gave it away, a red clamshell, and more. When my landlord comes, I keep them all in one place in my closet. When I move, I wrap them in bubble wrap. My ashtrays mean everything to me.

I don’t smoke inside. 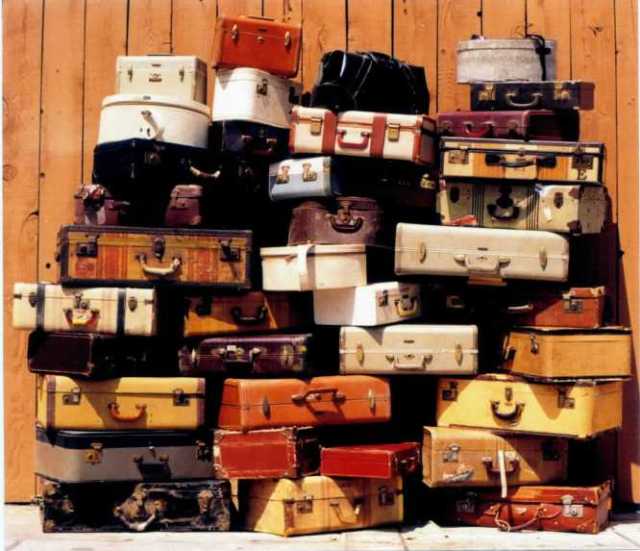 Vintage suitcases may not have wheels, they may not be economic, they may be musty, but damn it, that Diane von Furstenberg carry-on was $3 and it’s totally worth the not-being-able-to-feel-my-arm-after-a-long-terminal thing. Now, it’s also no longer alone, since it’s accompanied by the beastly floral suitcase on wheels I got at a flea market, a Jordache bag I can’t even properly explain, and a brown leather bag that makes me feel like an outtake from a Wes Anderson movie.

I keep over ten broken readers and sunglasses in a silk-lined floral box in my closet, and before that I kept over ten pairs of readers and shades in a silk-lined floral box on a shelf. I have emotional issues and letting go is hard for me. Beyond that, I am convinced that one day I will meet an heiress to the LensCrafters throne willing to take a stab at putting hours of repair work into $10 shades I really liked to wear last summer. 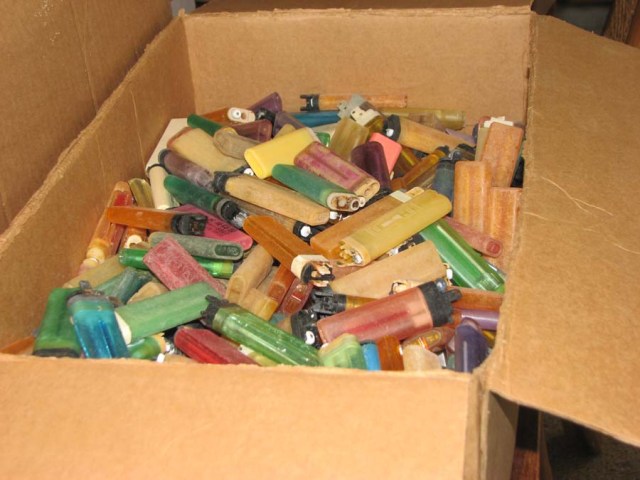 How else am I supposed to remember the good times?

I used to call them “memory lighters,” but the reality is that when I moved I cracked open a wooden box filled with BIC lighters, those cheap see-through lighters you always end up with after parties, and Ed Hardy limited-edition lighters I bought down the street when I was coming out and smoking a lot of cigarettes. I didn’t always remember what memories they were associated with, although I was embarrassed I ever took some of them out of the house. For the sake of posterity, I’m putting it here in writing that I came out by passing people an Ed Hardy lighter with a naked chick on it in college, because I threw these out immediately upon arriving at my new place.