This series started with the promise that I’d put a positive spin on all the classic lesbian tropes we bemoan. Well, this might be my greatest challenge yet.

While queer villains can be sexy and fun, and queer depressives can have their moments before they end it all, what do we do with the queer characters who are just… miserable? Not only unhappy, but mean, written to be insufferable and cruel.

I tried and failed to write about two of the most famous pre-1980 lesbian classics: Robert Aldrich’s The Killing of Sister George and Rainer Werner Fassbinder’s The Bitter Tears of Petra von Kant. Both films are wonderfully made, but they’re just too bitter for even my unquenchable thirst. Their portraits of lesbianism are so toxic, so unpleasant, they leave little room for enjoyment… unless you really feel like wallowing.

But that doesn’t mean this trope is always irredeemable. It certainly helps when a movie stars Jane Fonda, Barbara Stanwyck, and international heartthrob Capucine. 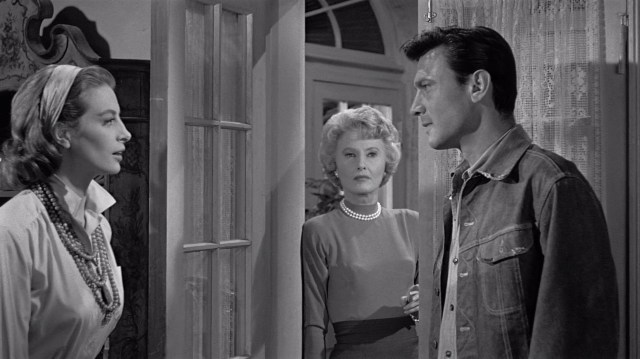 It also, unfortunately, stars this man.

Walk on the Wild Side imagines itself as a Tennessee Williams-esque drama. But that’s only true if you associate Williams with sexy Southern tragedy and forget about the whole “good writing” element. No, this movie is not going to win any awards (in fact, it didn’t!), but trust me it’s still very much worth watching.

This tale of lesbianism and sex work in New Orleans begins with a very gay title sequence. A cat walks slowly through the city as the film’s sultry, dramatic score blasts in the background. “Texas, The Early Thirties” the screen reads as the sequence ends and we meet our unfortunately male protagonist, Dove Linkhorn.

Dove is headed to New Orleans to follow his heart. His heart wants a girl he describes as being 119 pounds with pretty eyes, because Dove is the fucking worst. Luckily, he soon meets Kitty Twist who is the fucking best. 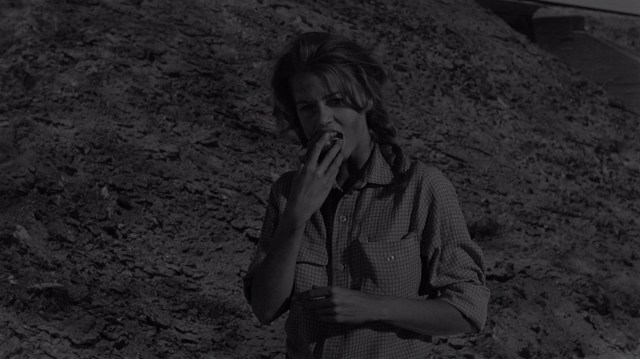 An apple a day keeps the– Wow I am gay.

When Dove first encounters Kitty she’s sleeping in a pipe. “My doctor recommended fresh air!” she shouts at this nosy stranger. She shares her temporary home in exchange for an apple and then wisely tries to rob Dove while he sleeps. Alas this fails and she decides to sleep with him instead. He refuses because he’s stupid and because he’s staying loyal for this mystery woman whose weight he has memorized.

“I made up my mind when I ran way from home. I’m gonna have a good time. Nothing else. Just a good time.” Kitty declares her life philosophy. This quickly conflicts with Dove’s puritanical beliefs and upon entering New Orleans they part ways. Fonda disappears from the film for the next forty minutes and I’d just like to say it is insane to have Jane Fonda in your movie and keep her off-screen for that long. Insane. 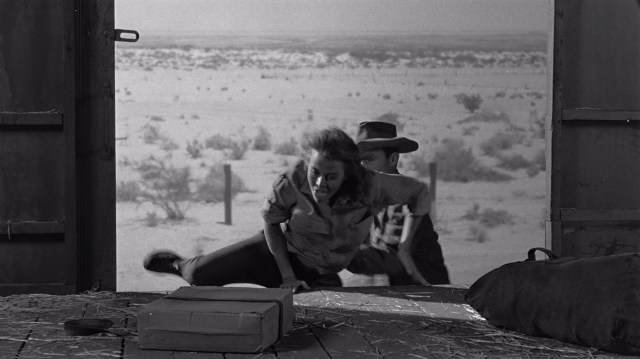 Am I jealous of a train??

Thankfully this is when we meet Dove’s lost love, Hallie (Capucine), and more importantly her boss and almost lover Madam Jo. Jo is played by Barbara Stanwyck, who I must confess is the only Republican I’ve ever had a crush on. Two decades earlier she declared herself a sex symbol with iconic performances in The Lady Eve and Double Indemnity and it’s a lot of fun to see her play a lesbian even if her character is meant to be mean and desperate.

Jo is madly in love with Hallie and they bicker like a couple in the final stages of lesbian bed death. Jo wants Hallie’s attention all to herself, but Hallie is easily bored. When she isn’t working, Hallie wants to sculpt and go out. She doesn’t want to hang around with Jo.

Dove reappears and Hallie tries to send him away. She thinks he’ll reject her once he finds out she’s a sex worker and she wants to avoid that discussion. But he’s persistent and she’s smitten (or just bored??) so they restart their once-promising romance.

Jo can’t take this. She begins to reinforce Hallie’s fears insisting that Dove will never accept her. It’s sad and desperate and cruel. But it’s also so obviously coming from her own place of fear. She genuinely loves Hallie and there are hints of an earlier time where that love was mutual. Her methods for keeping her around are inexcusable, but the feeling is understandable. 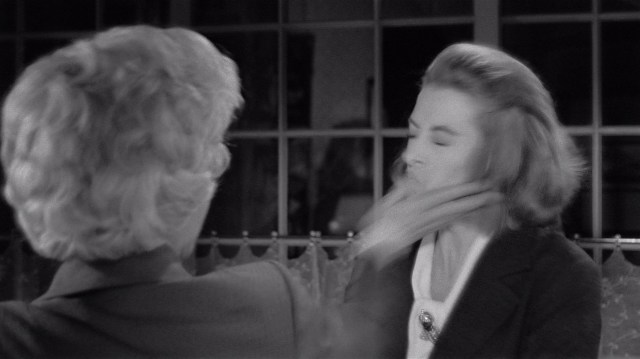 You cannot pray away the gay, nor slap away the straight.

Just when things are starting to get maudlin, Kitty triumphantly returns. She got picked up for vagrancy and Jo bailed her out of jail. Now she’s happily taking a job with Jo. Despite Dove’s judgements, and the judgements of society, the film itself is surprisingly progressive around sex work. Hallie’s reservations are only due to Dove. Her actual life is rather pleasant, if a bit boring. And Kitty is absolutely thrilled. Never has she felt so qualified and stable in a job.

Dove decides that what Hallie needs is to be rescued, taken away from her life and reformed. Whether or not Hallie actually wants this is a different matter. At times, it seems like she does love Dove. But how can he truly love her if he judges what she’s done? She doesn’t want to be rescued, she just wants to be cared for and understood.

But Dove doesn’t understand this and he shows up at Madam Jo’s for Plan Rescue. He is horrified to run into Kitty. He asks her what she’s doing there and she shoots back, “I run the candy concession.” (I love Kitty and Jane Fonda so much. Wow.) Dove follows up with more judgement. “Why are you doing this Kitty?” he asks, his voice dripping with condescending concern. “I like my work. Beside you meet a better class of people than you do on the road,” she digs, shutting him up once and for all. 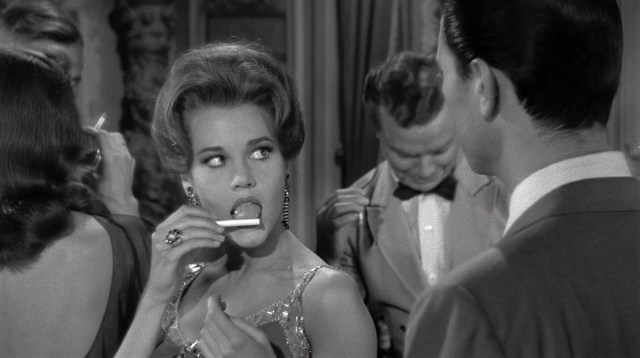 Hallie decides to leave with Dove despite her hesitations. Jo pleads with her. She says the place needs her, she needs her. Hallie is unmoved.

Jo’s henchman reveals himself to be her ex-husband. He mentions that he never felt like Jo loved him as much as she loves Hallie. She breaks down.

“Can any man love a woman for herself and not wanting her body for his own pleasure? Love is understanding and sharing, enjoying the beauty of life without the reek of lust. Don’t talk to me about love. What do you know? What does that young fool know? What does any man know?”

Stanwyck is incredible in this scene. Her words may argue for a platonic love between women, but her tone and body language betray her. The trope of the cruel, older lesbian is usually driven by self-hatred and here it’s no different. Jo won’t allow herself to admit her true feelings for Hallie and therefore her need to control her increases. It’s all she has.

But while other films feel cruel towards its characters, this film just feels sad. Jo will use blackmail, emotional manipulation, and sheer force to try and hold onto Hallie, but in this scene her love is so pure. It’s especially thrilling to watch because Stanwyck was such a sex symbol, is such a sex symbol even if at this point she was mostly ignored by ageist Hollywood. 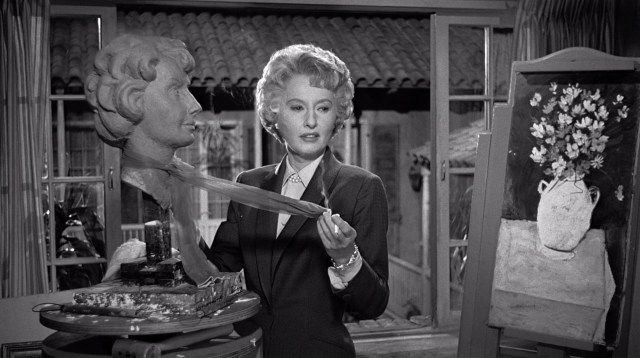 “And Jenny’s head fell off.”

Kitty decides to help Hallie escape, but then in a scuffle between Dove and Jo’s bodyguard, Hallie is shot. Jo and her crew go to prison. Kitty is turned over to the authorities. And Dove is allowed to continue living his life as if he didn’t come to town just to make a mess of things.

But before this inevitable conclusion, this attempt at tragedy and retribution, Walk on the Wild Side presents an alternate world. A world where women take care of each other and only use men for their wallets and their muscle. If only these women had allowed themselves to consummate their love for each other. 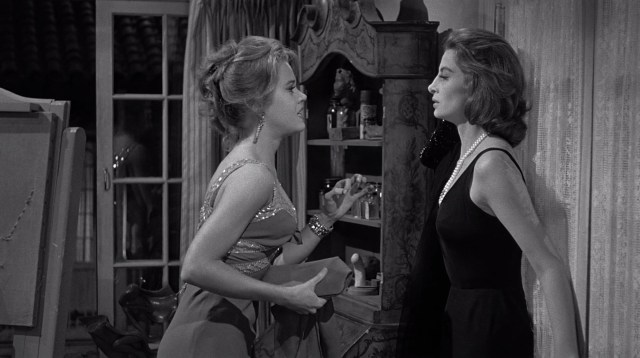 “It’s only this big! It’s not worth it! My fist will work much better!”

Drew has written 153 articles for us.