HELLO and welcome to the 243rd installment of Things I Read That I Love, wherein I share with you some of the longer-form journalism/essays I’ve read recently so that you can read them too and we can all know more about LaCroix! This “column” is less feminist/queer focused than the rest of the site because when something is feminist/queer focused, I put it on the rest of the site. Here is where the other things are.

She Thought She Was Irish — until a DNA test opened a 100-year-old mystery, by Libby Copeland for The Washington Post, July 2017

You send out for a 23andme kit and then shit gets complicated.

It is astonishing what DNA testing can do. The same technology can cleave families apart or knit them together. It can prompt painful revelations, and it can bring distantly related members of the human family together on a quest, connecting first cousins who look like sisters, and solving a century-old mystery that could have been solved no other way. It can bring to light a split-second mistake committed by someone long dead, in a city across the country, in a building that no longer exists. It can change the future and it can change the past.

The New Rules For Making It In Hollywood, by Zach Baron for GQ, July 2017

The Lawyer, the Addict, by Eilene Zimmerman for The New York Times, July 2017

Using the story of one man’s overdose and death as a departure point, this story discusses how the lifestyle of lawyers at busy firms can often lead to and obscure drug and substance abuse in an industry that celebrates aggression and working way too many hours.

The Future of Media is Here, And I Was There, by Sean Cooper for Tablet Magazine, May 2017

I’m always a sucker for dystopian content marketing stories live from the belly of the BEAST!!!

Everyone in my mother’s family sitting in this room is darker, and I’m one of the darkest —a deep shade of chestnut to everyone else’s wheatish complexion. Even at 11, I’m constantly offered suggestions that I ignore: scrub my face with besan, eat lots of cream, dab almond oil on my face at night.

Queering the Rural, by Bryony White for Hazlitt, July 2017

This very good essay which has everything including hidden lesbian history and queer theory will rub up against you in some spots, maybe.

Believing that the city is the only place of queer self-intelligibility upholds the fact that I am somehow in the closet in my rural home. I spent a long time allowing this idea to sediment. When many cultural and social representations of coming-out tales portray the urban as the only platform for queer visibility, it is easy to allow this to become the dominant narrative.

Oakland was a real cool place to be an artist but now gentrification and the Ghost Ship Fire and the tech boom have all conspired to make Oakland a real shitty place to be anything besides Super Rich and what happens to cities when they lose their artists! They start to suck. This article is real thorough and long and great.

Losing It in the Anti-Dieting Age, by Taffy Brodesser-Akner for The new York Times Magazine, August 2017

Diets used to be commonplace, a thing every woman was doing, had done, or planned to do. Then science started shifting, body positivity gained momentum, and now in this new day and age how do companies like Weight Watchers survive and appeal to a new audience that wants to diet but doesn’t want to call it a “diet” anymore.

How Instagram is Reshaping Restaurant Design, by Casey Newton for The Verge, July 2017

They put that mural there so you would take a picture in front of it. They did that for you.

I definitely wouldn’t have read this if Liz Smith wasn’t a lesbian, but she is, so I read this.

Why LaCroix sparkling water is suddenly everywhere, by Libby Nelson and Javier Zarracina for Vox, June 2016

The Turkey in the Left Turn Lane, by Julie Beck for The Atlantic, August 2017

Um hi this is my turkey. I mean — it’s not my turkey. But this is the road I drive down 2-6 times a day, and this is a turkey I saw on many of those rides, and I admired it. I admired how it would just sit down in the middle of a crowded road with a 45 MPH speed limit and hang out as cars wove delicately around it.

Then a shrine sprung up on the corner where the turkey used to live and apparently had since died, and I thought, “oh wow, my whole community loves this turkey as much as I do!” and also “OH NO THE TURKEY IS DEAD” and I almost cried about it.

This week, Laneia came across this article and sent it my way, as obviously everybody who has ever visited me has seen the turkey and also because I had already told everybody about how the turkey had died and I was sad.

riese: this turkey article
laneia: the fucking turkey article like, sit down and take a fucking minute
riese: i just !
i thought it was a little thing i had no idea!
i honestly wasn’t sure if that many people had noticed him
laneia: i don’t think anyone was ready for what a thing it had become
riese: i remember when heather saw him and was like “omg is he okay” and i was like “i promise you he somehow is” and she was like “okay if you say so”
laneia: yes!
riese: maybe now somebody will buy my house to be closer to this world monument
laneia: stranger things have happened
probably just this afternoon
riese: i think the thing with the turkey is that
lately, everyday life can often feel like
a bunch of cars are coming at us from both directions
so many near-misses
and we’re freaking out like frogger
so it’s so peaceful to see a turkey just standing in traffic
cool, confident
laneia: eye of the storm
riese: it’s happening to the turkey too, the chaos coming in from all sides, but the turkey is a cool customer
we want to be the cool customer
laneia: we strive to be the turkey

In conclusion, I would like to leave you with this excerpt from the turkey article:

“Indeed, he exhibited a blatant disrespect for the killing power of cars, often pecking at them, or lying languidly in the road as they rolled by.” 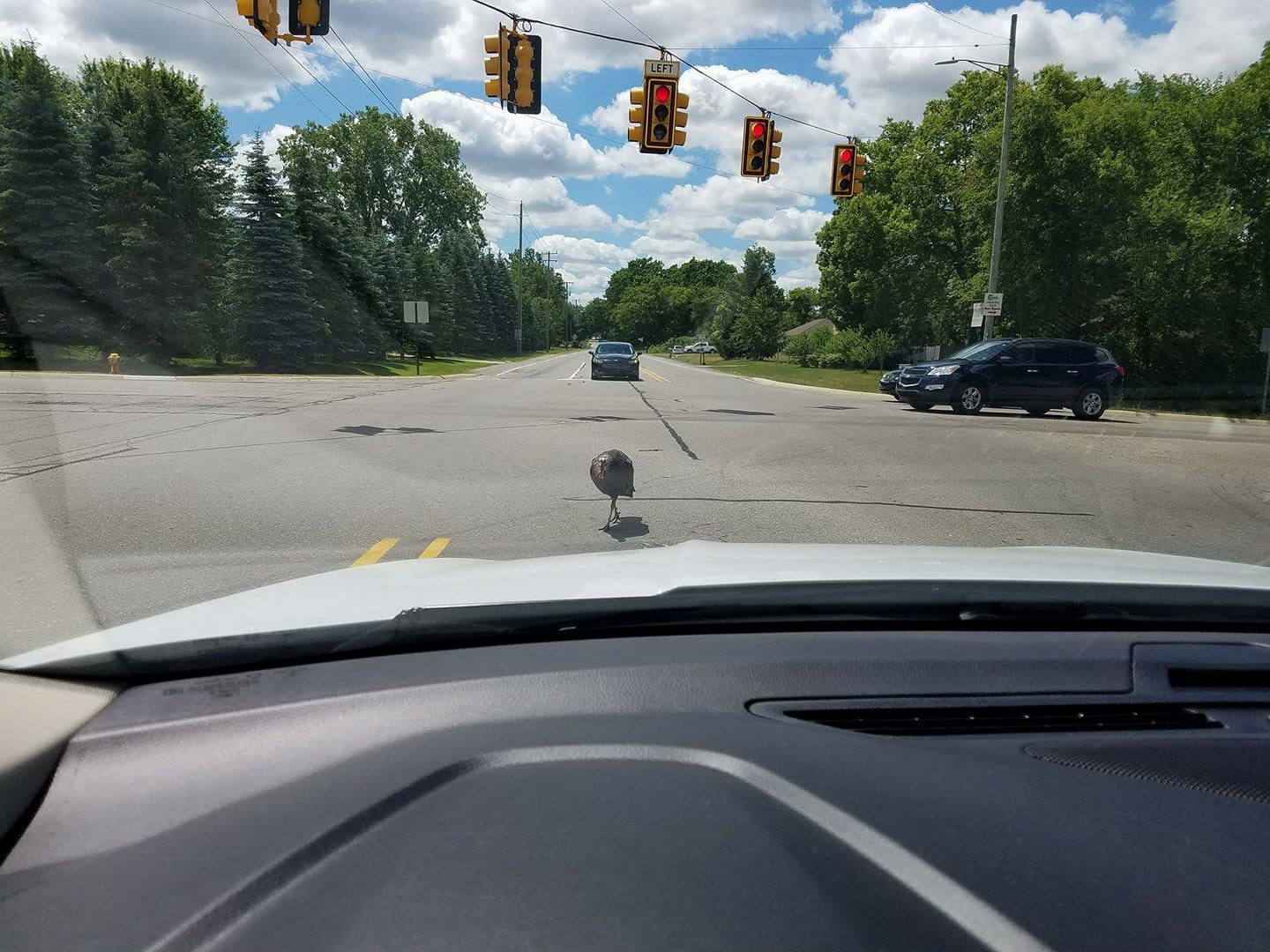 sign up for our newsletter
Related:longform journalismthings i read that i love