International movements marching to liberate their LGB(TIQ) brethren from the clutches of homophobic governments, led by the likes of HRC and others, are on the rise nowadays, bringing awareness to the dangerous conditions in which some LGBTIQ people live worldwide – yet at the same time steamrolling over the voices and work of those very people. What’s far too often missing from the narratives of global activism is the nuances of local contexts and agency of these “oppressed” people, people who don’t simply sit around waiting to be saved. This is where the ASC comes in: formed initially of an informal network of regional grassroots activists and despite numerous unsuccessful attempts at lobbying ASEAN governments, the group is growing strength to strength and this coming year looks set to be a big one for them.

The ASEAN SOGIE (Sexual Orientation, Gender Identity and Expression) Caucus (ASC) – previously the LGBTIQ People’s Caucus – is a network of diverse activists in Southeast Asia that aims for the inclusion of SOGIE provisions in ASEAN human rights mechanisms.

To understand more about what the ASEAN SOGIE Caucus does and why, I talked to activists Ron de Vera (Philippines), Anna Arifin ‘Upi’ (Indonesia) and Ng Yi-Sheng (Singapore). 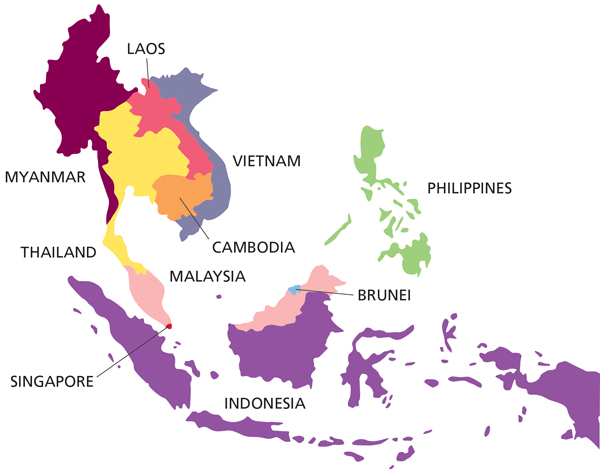 ASEAN covers an incredibly diverse geographical region. Political systems range from democracies (Indonesia, Philippines) to communist states (Laos, Vietnam) and from constitutional monarchies (Cambodia, Malaysia) to absolute ones (Brunei). Islam, Buddhism, Roman Catholicism and Hinduism are the main religions practiced in the area, with secular states, religious ones and everything in between existing alongside each other. Southeast Asia is home to many indigenous peoples and Indonesia alone speaks more than 700 languages. Quite significantly, there is massive economic disparity among ASEAN member states: GDP per capita ranges from US$50,000 (Singapore) to US$850 (Myanmar).

Southeast Asia is also the birthplace of the Yogyakarta Principles (“joug-ja-car-ta”), a “universal guide to human rights which affirm binding international legal standards with which all States must comply.” These principles informed the 2008 UN Statement on Human Rights, Sexual Orientation and Gender Identity, which has not been adopted by the UN General Assembly and remains open to signatories.

Why the ASEAN SOGIE Caucus?

Both social conceptions of SOGIE and related legal protections vary significantly from country to country, but the ASEAN member states have one thing in common: discrimination, harassment and violence against people of non-normative SOGIE are highly prevalent in all of them.

From a recent press release by the ASC:

According to Social Action for Equality (SAFE), a Manila-based organization that monitors hate crimes against Lesbian, Gay, Bisexual, and Transgender (LGBT) people, there have been more than 164 LGBT killings in the Philippines since they started monitoring media reports in 2009. Figures on violence against LGBT people remain underreported due to poor protection mechanisms and legislation in the region.

The network of LGBTIQ activists that was to later become the ASEAN SOGIE Caucus evolved through gatherings such as International LGBTI Association (ILGA)-Asia Regional Conferences. In 2011, prior to the ASEAN People’s Forum (APF) or ASEAN Civil Society Conference (ACSC) in Jakarta, four community groups – Arus Pelangi (Indonesia), The Institute for Studies of Society, Environment and Economics (iSEE) (Vietnam), Information Connecting and Sharing (ICS) (Vietnam) and ILGA-Asia – gathered 42 LGBTIQ activists from eight ASEAN countries for the first time. The group formulated three recommendations for ASEAN leaders, which they presented at the APF/ACSC. 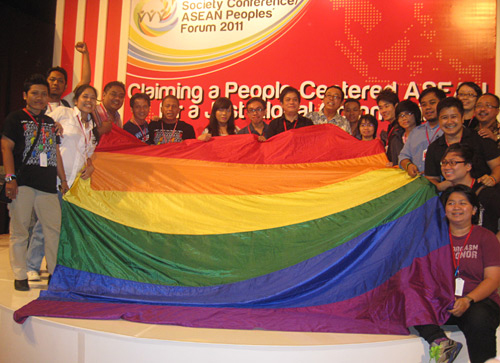 From the 2011 statement of the first ASEAN LGBTIQ People’s Caucus:

In various parts of the region, pride is unraveling and we will not take exclusion sitting down. LGBTIQ activists and organizations continue to actively engage government institutions, mass media, and civil society for equal rights and basic fairness. It is in this spirit of pride and dignity that we are reclaiming our rightful space in our respective countries and demand our governments to:

What has the ASEAN SOGIE Caucus done?

The ASC has directly lobbied ASEAN leadership at two junctures: first, in 2011 during the drafting of the ASEAN Human Rights Declaration (AHRD) in Indonesia at the 8th APF/ACSC, and second, in 2013 during the adoption of the Declarations on the Elimination of Violence Against Women and the Elimination of Violence Against Children (DEVAW and DEVAC) in Brunei at the 23rd ASEAN Summit. Unfortunately, neither effort has been successful in getting SOGIE provisions included in ASEAN legislation.

The campaign around the ASEAN Human Rights Declaration garnered much public visibility and action, including a street parade and gathering in Cambodia. 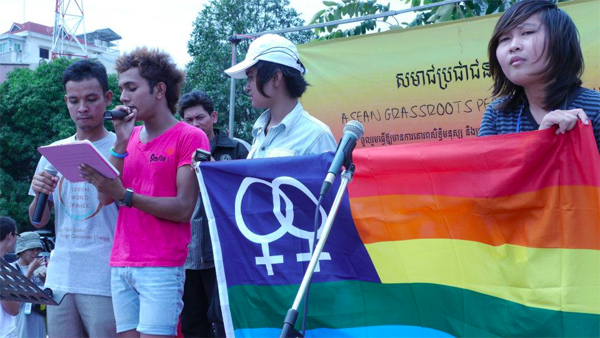 Organising around the recent ASEAN Summit, which took place in Bandar Seri Begawan, took on a different character. Brunei is hostile to both LGBTIQ people and protests in general, which made physical campaigning challenging. Instead, the ASC turned to social media.

During the summit (Oct 8 to 10), the ASC facilitated a real-time, thematic online discussion dubbled “#ASEANtoo! Queer Tweets” meant to raise regional and international awareness of ASEAN SOGIE issues as well as expose the lack of transparency of ASEAN processes. 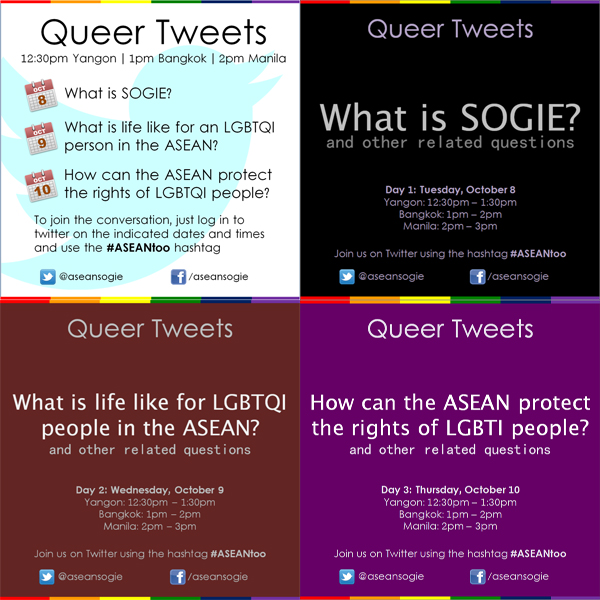 “Queer Tweets” was part of a larger and still ongoing campaign called “We are #ASEANtoo!”, launched a week before the summit. Responding directly to the exclusion of SOGIE protections in declarations protecting women and children from violence, the ASC produced a video containing tales of real violence against non-normative SOGIE people in Southeast Asia.

The ASC is also still accepting photos of people holding signs saying “We are/I am #ASEANtoo” in support of the campaign. See the current photos on the #ASEANtoo Tumblr and submit your own via the ask page, at aseantoo[at]gmail[dot]com, or on the ASEAN SOGIE Caucus FB page. 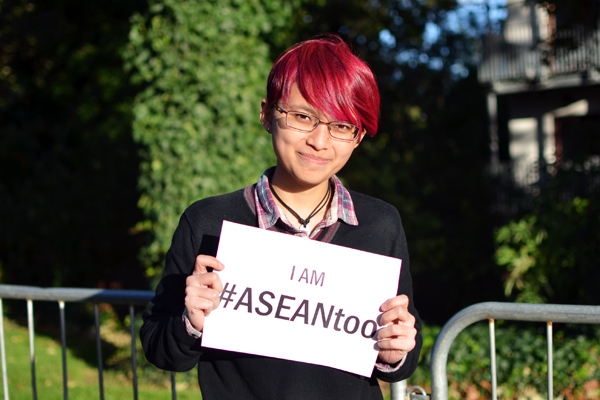 What is the ASEAN SOGIE Caucus up against?

When I asked my three interviewees about challenges they’ve faced, they were quick to point out something that hasn’t been a problem: co-operation. Despite coming from very different backgrounds and fighting battles of very different characters locally, the group has managed to get along and get things done very, very well.

Yi-Sheng: We have common aims and beliefs. Those of us who are involved in the ASEAN SOGIE Caucus are those who believe in inclusivity, in feminism and humanism, and the understanding that LGBTI rights are linked to other forms of human rights (e.g. labour rights, minority rights).

Anna: The other similarity that we have is the context of the problems that we are dealing with – discrimination which leads to stigma and violence.

The emphasis on inclusivity is key in an organisation in which the heterogeneity of its participants could otherwise be a debilitating weakness. For instance, the change in language from “LGBTIQ” to “SOGIE” was meant to reflect the diverse ways in which “queer” identities and behaviour are understood, conceptualised and expressed, recognising that using using language that does not speak to everyone’s cultural, historical and individual experiences can in itself be oppressive. In particular, what many would popularly understand as “trans*” identities and expression are incredibly variant in Southeast Asia.

When it comes to activism, members of the ASEAN SOGIE Caucus operate in markedly different political climates. Some governments are more receptive and accessible than others: activists have reported relative success in lobbying leaders in Indonesia, Thailand and the Philippines, while the Malaysian state sponsors campaigns demonising LGBTIQ people. Brunei remains largely impenetrable. Key challenges also differ from country to country: in Singapore, the government remains the largest obstacle to SOGIE recognition and protections, while in Indonesia, religious majorities have disproportionate sway over these issues. 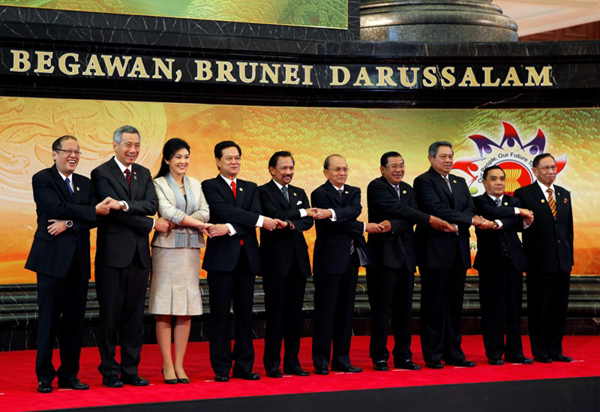 These suits disguise a surprising amount of heterogeneity.
via Balita

However, as Anna mentions, the ASEAN SOGIE Caucus works on what all of them do have in common: violence and discrimination. They aim for decriminalisation, depathologisation and safety provisions to be enforced regionally.

Some parts of Southeast Asia are not always the safest for LGBTIQ activists – the 2010 ILGA-Asia Conference in Surabaya, Indonesia was cancelled due to threats and harassment from Islamic fundamentalists – but the ASEAN SOGIE Caucus has yet to encounter such danger. Many groups that form the ASC are not recognised as legal entities and/or do not have access to funding, but other more well-established groups provide the structural support for the ASC’s meetings and activities. Anna noted that work as a local activist is more likely to invite threats and public backlash than regional activism. 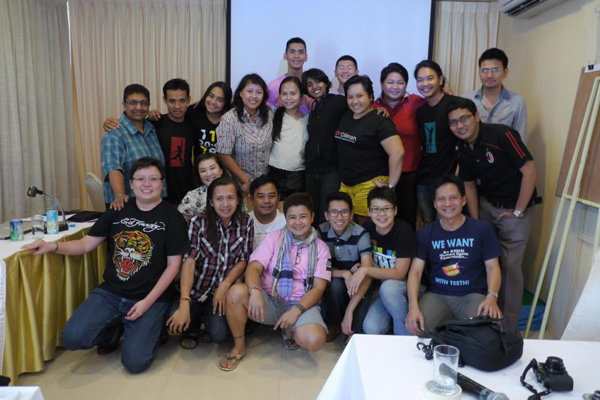 Finally, ASEAN’s decision-making mechanisms pose a significant challenge to the ASC’s lobbying efforts. The ASC has criticised ASEAN extensively for its lack of transparency – civil society organisations were consulted in drafting the AHRD, DEVAW and DEVAC, but no SOGIE organisations were included and ASEAN did not reveal how, where and when these organisations were chosen. Critically, major decisions in ASEAN require a unanimous vote, which makes it hard to pass anything even remotely contentious. Brunei, Malaysia and Singapore have repeatedly blocked the inclusion of SOGIE provisions in regional agreements.

Where does the ASEAN SOGIE Caucus go from here?

To further their work in increasing SOGIE representation in ASEAN processes, the ASC intends to become a legal entity within a year. In the meantime, they will continue to lobby the ASEAN leadership via the ACSC/APF, in which some ASC members are currently represented on national and regional committees.

The group also plans to release an annual report on the status of human rights of people of diverse SOGIE in Southeast Asia.

At the level of local activism, different Southeast Asian countries are moving forward at considerably different paces. Thailand is on the brink of introducing same-sex civil partnerships while Vietnam just recently removed a ban on same-sex marriages. The Philippines, despite being one out of only two countries worldwide that do not recognise divorce (the Vatican City being the other), is widely considered the region’s most gay-friendly state and home to the world’s only LGBT party. Singapore, Malaysia, Brunei and Myanmar still grapple with Section 377, a British colonial era law that criminalises sex between men. 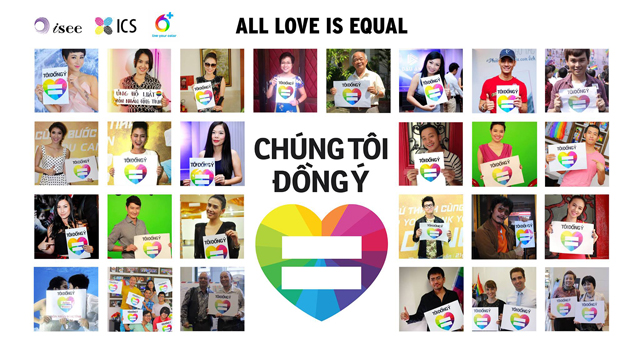 Vietnam equality campaign by iSEE and ICS, organisations that are part of the ASEAN SOGIE Caucus
via Trung Tâm ICS

Regional activism around SOGIE issues is still very new, and it will be interesting to see how the ASC develops as well as how it interacts with and builds upon more established local movements. As Yi-Sheng concludes, “I personally will say I hope the group can help to connect more national activists and build a regional movement. There is a lot of strength we can draw from regional solidarity – and we are always learning from each other’s struggles and successes.”

Ron de Vera is a development worker, LGBT rights activist, educator, writer, photographer, poet and sports fanatic based in Manila. He serves as the Spokesperson and Head of Education of Social Action for Equality (SAFE), an organisation that documents hate crimes against LGBT people in the Philippines.

Ng Yi-Sheng is a writer and queer activist. He writes for the pan-Asian LGBT news site Fridae and serves on the committee of IndigNation, Singapore’s queer pride month. His is the author of SQ21: Singaporean Queers in the 21st Century and the co-editor of GASPP: A Gay Anthology of Singapore Poetry and Prose.

Anna Arifin ‘Upi’ works with Arus Pelangi, an Indonesian civil society organisation. Arus Pelangi was founded in 2006 to give voice to the nation’s LGBT community and challenge discrimination. Given the diversity of Indonesia, the organisation places strong emphasis on plurality, non-partisanship and equality in its campaigns.

Before you go! It takes funding to keep this publication by and for queer women and trans people of all genders running every day. And A+ members keep the majority of our site free for everyone. Still, 99.9% of our readers are not members. A+ membership starts at just $4/month. If you're able to, will you join A+ and keep Autostraddle here and working for everyone?
Join A+
Related:asiainternational newsinterview