As I scrolled through the playlist I had made for The Owl House’s main romantic pairing, protagonist Luz and her rival Amity, I realized something about this one was different from the rest of my Spotify. Along with the usual mix of cartoon themes, emotional background tracks, bouncy K-pop, and angsty indie rock that usually populates my playlists, I had idly added several songs from Taylor Swift’s Speak Now album — a staple of my own young teenage soundtrack.

I don’t just adore Amity and Luz — I identify with them. Of course, as a queer woman experiencing today’s influx of representation, especially in shows on Cartoon Network and the like, I identify with plenty of gay and queer characters and relationships. But this feels different. Luz and Amity don’t just represent a possibility, or offer recognition. In them, I see a reflection of exactly who I used to be.

The Owl House is a charming show airing on Disney Channel that follows Luz Noceda, a misfit human girl who stumbles into a dimension of magic and quickly worms her way into the hearts of mentor Eda, demon King, and a small cast of friends. It’s reminiscent of Gravity Falls, Little Witch Academia, and pokes its fair share of fun at magic and fantasy genres. Created by bisexual artist Dana Terrace, The Owl House‘s main romantic storyline centers around Luz and Amity, a classmate who starts out as a mean girl/establishment witch à la Draco Malfoy, and slowly becomes a friend and ally. 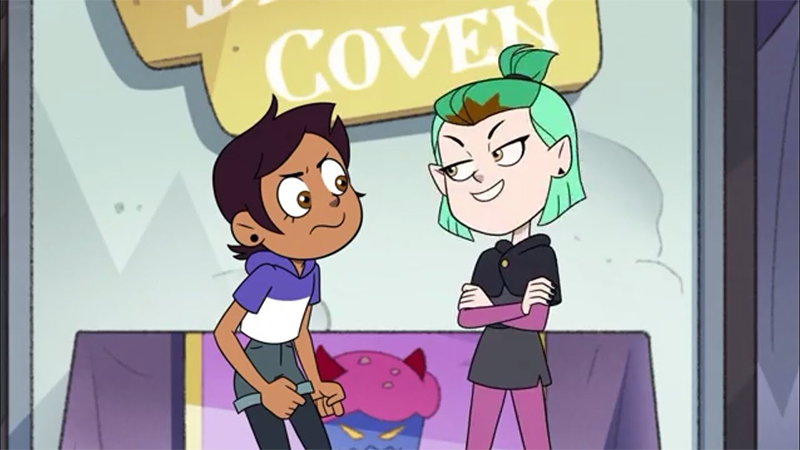 Here’s the thing: while Amity obviously has clear feelings for Luz, as demonstrated in their epic monster-fighting dance towards the end of season one, her quashed intention to ask Luz to the dance, and every subsequent blush since then, Luz’s feelings are… less clear.

Luz has hinted at bisexuality before, stating she has a new crush and “her name is Education,” in an earlier episode, and certainly returns a fair number of Amity’s adorable blushes. But if she does have feelings for Amity yet, she seems none the wiser, obliviously telling Amity “that’s what friends are for” when she agrees to dance with her, and remaining clueless about Amity’s feelings. The closest hint we get is her determination to hide her magical skill level from Amity, lying outright about being more advanced than she is. Seeing as Luz doesn’t generally try to seem cooler than she is with her other friends, there may be something less platonic driving her ambitious claims.

Having your “first gay crush” is by no means a monolith; it may have been when you were six, sixteen, or thirty-six; it may have been a knock-out surprise or run-of-the-mill. It may have been open and reciprocated or buried way, way deep. But I feel like there’s one realm of crushes that queer people rule over almost exclusively: the crush you don’t recognize.

And while she’s clarified things a bit by the end of season one, Amity’s storyline throughout also illustrates the ambiguity of first queer crushes. Until the moment it’s revealed that she had planned to ask Luz to the Grom dance, almost every glimpse we get of Amity alone shows her struggling to identify and categorize her feelings for Luz. Publicly, she regards Luz with contempt and then a grudging respect and acceptance, but privately, in her diary, she expresses deep interest in the “human girl,” while at the same time equating her acceptance of Luz’s presence as “showing weakness.” When Luz peeks into an empty hallway, she finds Amity ruminating on the idea of sharing a school with Luz, trying to convince herself that nothing has changed when clearly, for her, it has. Despite the signs, and perhaps because of them, Amity is determined to believe that her social position and state of being are not affected or challenged in any way by interest in a newcomer. 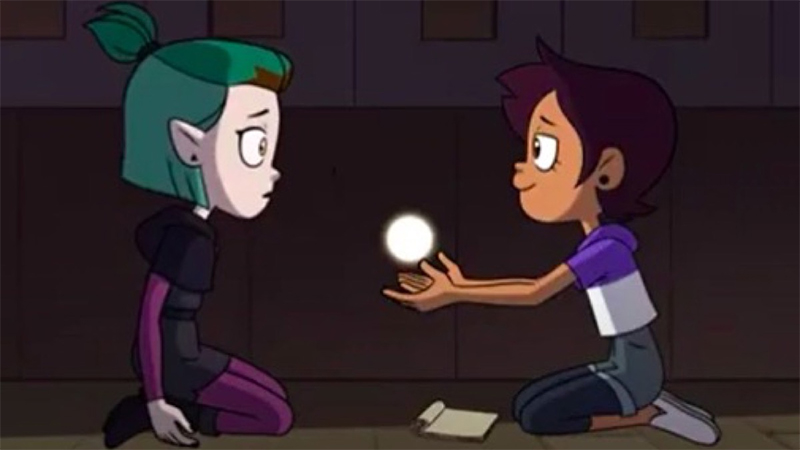 Of course, there may be ambiguous, denied, or slow-showing feelings in other circumstances, but I find it is almost a universal experience for a queer person to look back on their life and say, “oh wow, that was a crush”. This lack of recognition seems to stem from, first and foremost, just plain not knowing it’s an option. Add to that an unhealthy dose of disconnection from your feelings and self, and a striking lack of representation in the media, and you get… the crush that you just have no idea is a crush.

For me, that crush was a girl in middle school named Elizabeth. In seventh grade, she was placed into my very small “gifted” class, and I was instantly enamored, with no real idea why or what it meant. All I knew was that I knew exactly how her white-blond hair fell over her shoulders, the shape of the owl pendant she wore every day, and how worn down her converse sneakers were. I knew that I showed up early every other morning to gym class (gym class!) to sit with her and her friend Kylie and flip through their newest Teen Vogue magazine, which I didn’t even really read.

It did not occur to me to connect this to the unattainable, distant “crushes” that I’d had on boys in my class, the ones with perfect hair and funny jokes who seemed, all things considered, like pretty decent choices to crush on. To me, to crush on meant to bring up during sleepovers and slow lunches, maybe to study from across the classroom.

One afternoon when our teacher was out sick, Elizabeth and I took a large box of crayons from the corner shelf and excused ourselves to the hallway. We sat for the next hour and half in the quiet hall, laughter echoing off the scuffed linoleum as we taped new and improved Harry Potter-themed color names onto each and every crayon. Golden Snitch, Gryffindor Crest, Forbidden Forest.

Perhaps the whole point is exactly how much this afternoon stuck in my head; how perfect and complete it felt. I had never learned to make an association between crushes and that feeling; I knew they were something to want, aspire towards, not something to bask in the presence of. I knew that they were a struggle, and unlike so many of my crushes since, this wasn’t.

This is what I think of when I see Luz smile at Amity on The Owl House. I don’t know what’s going to happen with this show or this ship, and very likely, this blissful ignorance on Luz’s part won’t last. But something about it makes me feel recognized and seen, a specific facet of my own queer experiences illuminated. 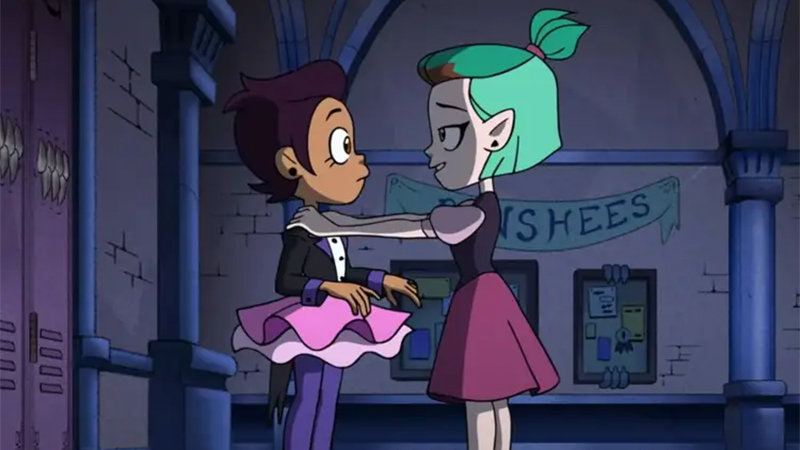 After years of insistence upon obvious and clear representation (which I agree, is necessary and still sorely lacking) and argument about what constitutes “real” representation of young queer folks, it is refreshing to see an example that is both undeniably queer and yet sincerely evocative of one of the most queer romantic experiences I think there is for young people — being queer without knowing that you’re queer. Because it doesn’t start the moment you recognize it — it starts with you, and the recognition might come later.

Neither we as the audience nor Amity herself perceive the stumbling and intense feelings she develops towards Luz as a crush at first, and Luz still isn’t there yet, but that doesn’t make the existence of such a crush any less real. I think heteronormativity likely plays a big role in the strange double standard of what we do and don’t pinpoint as a crush; if this rivalry and tension were between a boy and a girl, the romantic inclinations would seem undeniable and I wouldn’t be writing here about ambiguity or cluelessness at all. The characters, and the audience, would know.

It makes the 12 year-old in my heart feel less alone to watch The Owl House’s Luz and Amity twirl towards their inevitable romantic storyline without the weight of worrying that the show might be queerbaiting or otherwise unwilling or unable to let the storyline pan out. Because the landscape of queer cartoons has changed so much in recent years thanks to shows like She-Ra and the Princesses of Power and Steven Universe, and because this show is led by a queer creator, I am able — like Luz and Amity — to enjoy and linger in that space before the moment of realization.

Sarah Alexander is a writer living in Richmond, VA. Her interests include poetry, comics, fashion, and disability activism. She recently graduated with a degree in English and Gender Studies. She’s currently taking some time to bounce around like a pinball, which means right now she’s probably hanging out in the trees or reading about business scams on the internet. She uses both she and they pronouns.

Sarah has written 3 articles for us.