So it’s no secret that I have a bias toward Apple — it’s the tech I own, it’s the tech I’m most familiar with. Y’all have rightly called me out on it several times. But sometimes it’s really hard to be hardware inclusive when I have limited resources myself. I marvel at people who own a bunch of different kinds of computers, tablets, phones and consoles and can review, roundup and report on everything that comes out for everything. Sometimes it’s obvious where they get the awesome stuff — comes with a conference ticket, someone sent it to their publication specifically for review, et cetera. Sometimes I sit back and wonder how on earth they have mustered the resources to get techy with every new thing that comes out—I’m a writer, I simply don’t have that much money.

I’m also deeply aware of how hard technology is on the environment. I am terrified of what we’re doing to the planet; I think about it every day. And so, even as I am a lover of gadgets, I try to keep my consumption low in that department.

But there is one sweet piece of tech goodness that I’ve recently added to my roster, and I’m here to tell you exactly how to do the same. Enter my Asus C200 Chromebook. 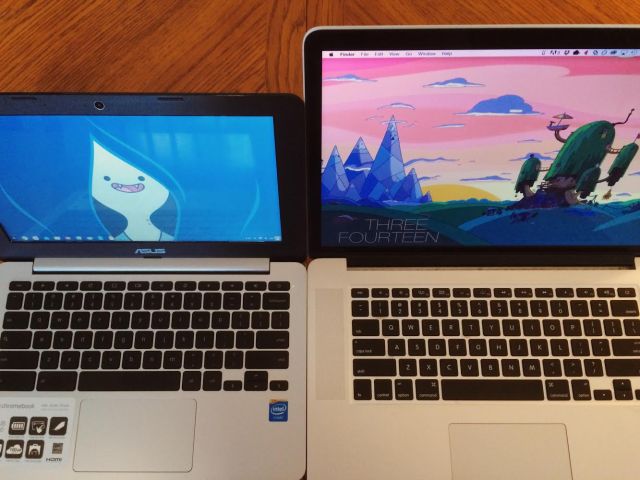 In case you didn’t already know how much of a nerd I am.

It has 32 gigabytes of internal storage and 4 gigs of RAM. I purchased it because I own a crazy and giant Retina Display Macbook Pro and got nervous carting it around New York City with me all the time. And I didn’t just get nervous, I also got a back ache. I wanted something less expensive and physically lighter to carry around with me.

I saved for two months and ordered this lovely little machine at the end of August. Since then, I’ve learned quite a lot about it, and about Chromebooks in general. Let me take you on the journey with me to get the lightest, cheapest computer for work and school ever.

This Hardware Is Amazing For Its Price

The most amazing part is, specifically, the battery life. I’ve had this Chromebook last for ten hours on a single charge. No joke. And since it’s the computer I use mostly while working outside my home, that charge lasted for three days. Some reviews say the performance is a little sluggish on this tiny machine, but I haven’t found that to be the case. Probably because I opted for the version with 4 gigs of RAM — that translates into better, faster multitasking. It boots quickly and the keyboard doesn’t feel miniature, even though it’s an 11-inch display/12-inch frame. The only real flaw I see in my Asus C200 is in its display — if you tilt it forward or back even a wee bit, the contrast washes out and what was previously perfectly readable becomes a mushy mess. It’s an especially apparent flaw if you’re used to a Retina display.

But guess what? The computer is under $300. Of course it isn’t going to compare with the displays many of us are now used to on our iPhones — Apple is a luxury brand. We’re not going for luxury here. We’re going for down and dirty work horse. I’ll take the hit on the display, personally, for the trade-off in inexpensive resources.

This computer is also hella light. I don’t even remember I’m carrying it around most of the time. It sits nicely in my bag’s computer compartment (my Macbook Pro doesn’t fit, it’s 2 inches too wide) and I don’t freak out as much when I go to the bar with the rest of the MFA students and I hang my bag on the back of my chair (far less constantly checking its contents, for sure).

I resisted doing this for so long, because I thought I wouldn’t be able to do most things I do on a Chromebook. But I discovered— 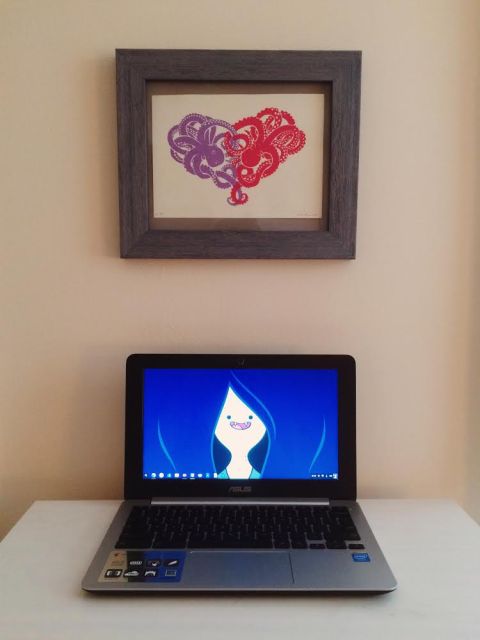 Here’s where to get the Marceline background. Print on the wall is by Erika Moen, just fyi.

I’m writing this post right now using the Chromebook. I can interact with my Autostraddle co-workers, zero out my inbox, make slide-show presentations for the class I’m teaching, take attendance and manage my calendar. All very, very easily from Chrome OS. And the limited storage isn’t a big deal because the Chromebook comes with 100 gigs of free Google Drive storage.

In the second installment of this series, we’ll go over all sorts of fun Chrome extensions, both made by Google and third parties, to turn your basic machine into the crazy workhorse it can be. Some of you will be able to stop there, having then figured out you can do every damn thing you need to. However—

You Can’t Do Everything On Chrome OS: Enter Linux

It’s possible to install Linux on a Chromebook. It’s even possible to do it so that you don’t have to double-boot, you can switch back and forth from Chrome OS to your Linux environment with a keyboard shortcut.  For those who need a full desktop environment on their tiny workhorse, we’ll be going over how to install different versions of Linux on your Chromebook as well, and what to do with it when you do that.

I’m no great Linux expert — in fact, this Chromebook has been my first foray. So we’ll be learning together on this one.

Who Should Do This?

If you need a computer for work and/or school and you cannot currently afford more than $300 worth of equipment, this tutorial series is definitely for you.

If, like me, you are looking for a light and cheap alternative to your heavy desktop or laptop to carry around on a commute, business travel or other adventures, this tutorial series is also for you.

If you are a visually creative professional (video editor, designer, photographer, etc.) and want to use a Chromebook as your primary or only computer, this tutorial series is definitely not for you. As an auxiliary, sure. But this display is a real problem and the storage space and RAM won’t be enough to run the intensive software you need to run.

So are you ready? If you already have a Chromebook, you’re all set. If you need one, I can comfortably recommend the exact one I have. It costs $292.81 on Amazon, but I watched it for two months and got it discounted at $250 during a sale (keep an eye out, is what I’m saying). If you want to pick a different Chromebook at a different price point, that is also cool beans — most of what we’ll be doing with Chromebooks should work on any ole one, though speed and storage capacity will vary. I recommend sticking with an Intel-based Chromebook (rather than an ARM one) because you will be able to do more with it. To make sure you’re getting an Intel-based one, look at the specifications for the processor.

Are you already a Chromebook acolyte? Follow along anyhow and offer up suggestions along the way!

This has been the one-hundred-forty-fifth installment of Queer Your Tech with Fun, Autostraddle’s nerdy tech column. Not everything we cover is queer per se, but we talk about customizing this awesome technology you’ve got. Having it our way, expressing our appy selves just like we do with our identities. Here we can talk about anything from app recommendations to choosing a wireless printer to websites you have to bookmark to any other fun shit we can do with technology. Header by Rory Midhani.