It’s a great day for body-positive glitter-fabulous electronic pop synth slut-step. A great day, indeed. Why? Because the GAYmous self-titled album was officially released on Friday. And it is absolutely glorious. Glorious!

This album cover has everything: pizza, handcuffs, banana splits, and a microphone that might also be a Hitachi Magic Wand. 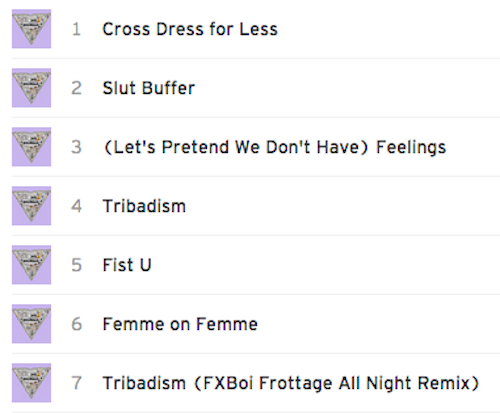 GAYmous has been “emotionally scissoring” with Bay Area audiences since 2012. FXBoi and PizzaCupcake describe their slut-step sound as “the child of Prince, Gravy Train, and the sound of the kinky sex your neighbors have upstairs.” You may remember July‘s very not-pretend feelings about GAYmous’ first music video, (Let’s Pretend We Don’t Have) Feelings.

Since their single went mega queer viral, I have had nothing but feelings and I was so ready for this album to drop. BUT I WAS NOT READY. 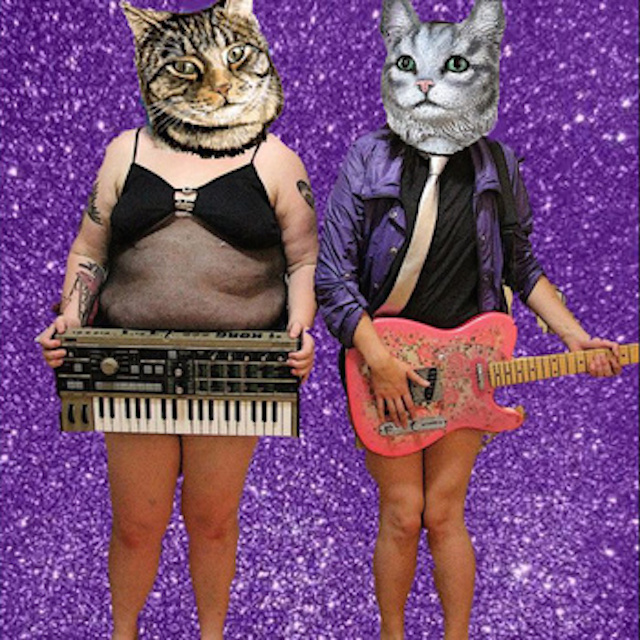 I had a chat with PizzaCupcake and FXBoi about their first-ever album and how things are feeling right about now. PizzaCupcake is the lead singer, lead diva, and self-proclaimed genderqueer fat femme who writes most of GAYmous’ lyrics. They said they are most excited about “making stuff that people laugh and relate to and that makes people want to dance…stuff people can get ready to [go out to]” and that “reflects some aspect of their lives.” They said they are especially excited about “having a lot of songs being about fat sexuality and fat queers” on the album.

FXBoi — who wants to stress that even though she uses she/her pronouns, she “is not a lady” (I hear you!) — spends many long days and hours on the production/beats in the beatcave (similar to the Bat Cave, but nerdier). She talked about having “an all-queer and women team working on the album” and is pumped up “to make queer dance music that’s made for queers by queers.” She also talked about wanting to shake up “the butch/femme dance,” which, as a butch, she feels sometimes perpetuates misogyny and heteronormativity.

That’s what is so ridiculously good about GAYmous’ music and lyrics. It’s electronic pop you can dance your ass off to, but there are underlying messages that are deeply subversive, that celebrate radical queer culture, relationships and sex. They balance those really real topics with a fun upbeatness that gets into your jiggly parts and makes you want to shake it off (PizzaCupcake is a secret T-Swift fan and they are a little ashamed like we all are, but we’re all in this together, OK?). It’s important to them both that the carefully crafted lyrics still be pop-music-bouncy, relatable, and accessible. As FXBoi says, “We still want it to be sexy and fun…and heteropatriarchy is kind of hard to rhyme.”

How to review such an album? Well, there are seven perfect tracks. (There are also seven deadly sins. A coincidence? Probably not.) Let’s just take it slow and go track-by-track, babes. Whip up some cupcakes and roll around in some glitter and take your pants off. Are you ready? Let’s do this thing!

A song about lusting after a fat femme that is both empowering and hot? Um, yes, please. I will, in fact, meet you in the dressing room to show you what I’m working with. I WILL. This song is not so much about literal cross-dressing as it is about gender role play and keeping it thrifty by getting it on in the dressing room of a store. I just love a song that not only celebrates fucking hot fat bodies, but is explicitly void of the male gaze. I’ll be waiting in the dressing room a.k.a. “the skank palace where all the sluts hang on a Friday night.”

Aren’t we only allowed six items?
Doesn’t that include you, me, and a bottle of lube?
I don’t know. I’m kinda nervous. Aren’t there security cameras everywhere?
Whatever, they’ve never recorded such fine ass queers.

In this love song to casual sex, FXBoi and PizzaCupcake generously offer their services to help you in your time of sexual need when you’re recently dumped and/or not looking for a new relationship. What I love about GAYmous is their dedication to sex-positive lyrics that are full of good shit like explicit consent and validating queer emotional vulnerability and getting it on without culturally loaded BS. So, uh, yeah, if you need to get off, text your totally consensual slut buffer instead of your ex, OK?

Text me instead / I’ll give you a show

3. (Let’s Pretend We Don’t Have) Feelings

I’m still processing my feelings about this single every time I listen to it. It just speaks to my essential queerness in the most real way. And the music video makes me want a music video for every single GAYmous song. It’s so hot, so queer-affirming and it’s for us, by us. And there’s pizza. And there are so many gorgeous folks of all sizes and colors and gender expressions. And the beat is so catchy. And there are so many quotable lines. And I’m dead. I died. Of feelings.

Hey boi. / I don’t do the butch/femme dance / to get in anyone’s pants / but I’ll subvert it with you.

Yes, Virginia, sometime we just “really want to trib.” Is this the official theme song for Autostraddle? It might be. And with GAYmous’ three-step program for successful frottage (1. Put the pussy on blast. 2) Shake ya’ ass. 3) Hump to the left. Hump to the right. Frottage all night.), you’re going to be an expert. So put on Tribadism and do your thang. Don’t forget the circles.

It doesn’t matter what junk you’ve got / grind on my crotch.

I love you / and I bought some paraben-free lube.

They say you learn something every day. I didn’t know exactly how glitter was made, but apparently it is the byproduct of femmes getting together. If any of you have experience with this, please speak up. I feel like I should have made glitter at least once in my life, but maybe we were both too confused about our sexuality at the time to produce the femme-on-femme glitter. Seriously, though, this song speaks to the queer desire that has no name. Femme-on-femme desire. One of the most invisible queer relationship possibilities. The most ridiculed and the most tainted by the male gaze. This song reclaims that desire and names it and eroticizes it through the queer lens and it is a panty-dropper. If you share your lipstick and lacy underthings with your lady love and often get mistaken for sisters or BFF’s, this one is for you.

P.S. See below about the upcoming Femme on Femme music video!

I want a femme on the street / and a femme in the sheets.

This is the EDM remix of Tribadism. It might trigger flashbacks to your favorite lesbian bar (that probably closed because the world is sad). It will definitely make you want to prance around your bedroom chanting, “Trib-a-dism.” Crank it up and get into it. 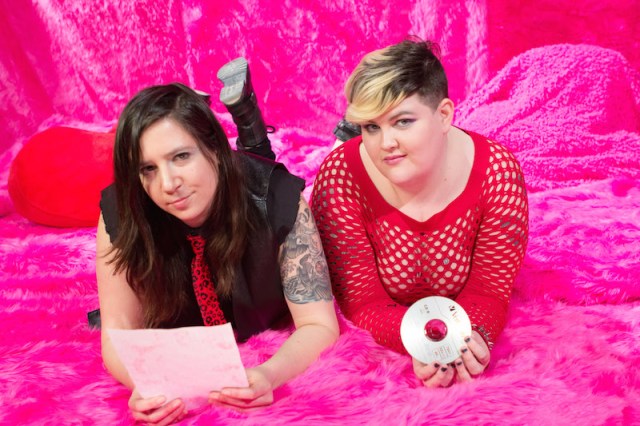 What’s next for GAYmous? They are currently working on a second music video for Femme on Femme, which has been shot and is in editing now. They don’t have an exact release date yet, but they gave us the teaser that it will be a “disco femme witch coven.” DISCO FEMME WITCH COVEN! So obviously the world needs that and I can’t wait to revel in it!

We talked a bit about what their hopes for the band are. As they said, “[our songs] are never going to be played on Top 40 radio, but that’s not the point.” What would success look like? PizzaCupcake and FXBoi just want to “go on tour, meet lots of babes, have baby gays in lots of corners of the world” and if their songs “inspire people to try new sex acts, explore their sexuality, that’s cool, too.”