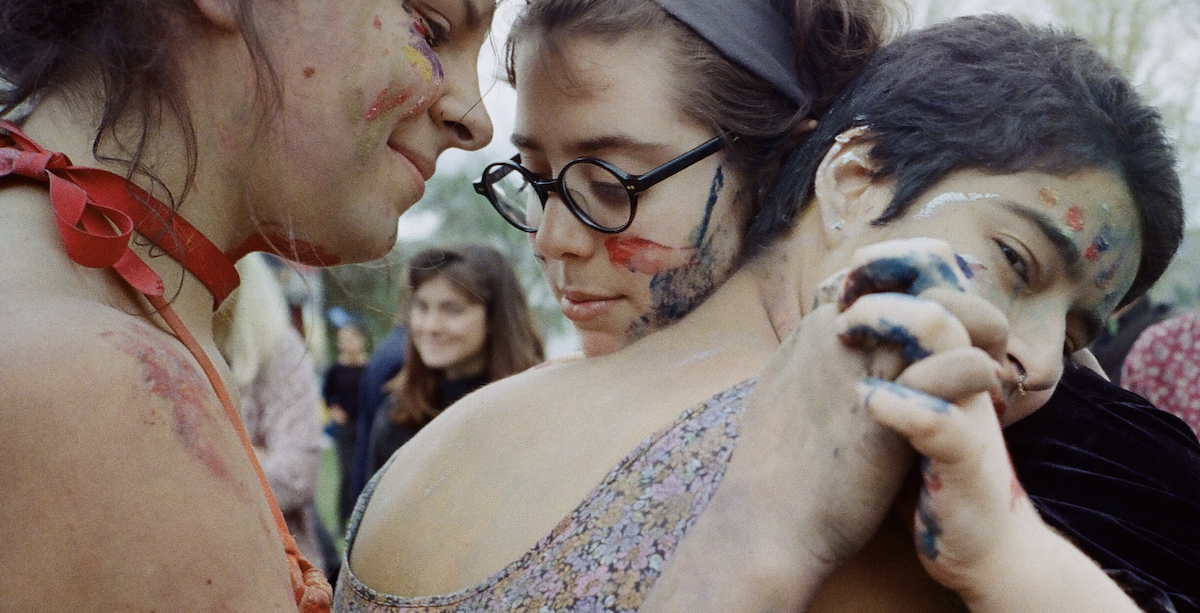 It must have come from my grandmother. It’s the kind of bag that only a grandmother could find, a little fussy but still fun, probably from some woman who makes them on her weekend. It’s a teal-blue leather square, with a dog wearing a scarf in the corner. Its frail polyester pockets have been torn off from years of use, leaving it resembling a black hole. I am forever finding crumbs of the past in between these folds.

The reason I know it must have been from my grandmother is I remember holding it in the bleachers of my brother’s hockey practice when I was 10. It carried my prized possession, a Zune that I used to listen to NPR during practice, as other kids ran around or watched the scrimmages. I had tried to play hockey, but I was growing that year, and my limbs had not yet learned to control themselves enough to get past tryouts. So I sat and listened.

I stopped using the bag when summer was over, and I went back to a backpack that would get filled up with crumpled papers and forgotten pencils. It hung on the hooks in my hallway for almost a decade, where it became covered in the debris of my teen life. Blazers, leather jackets, and the rest of my Baby Gay Outerwear Staples buried it, until I forgot it was there. I left for college without cleaning out the coat rack; it had become just one more stack of memories I preferred to leave alone as I went my merry way.

But six months later I was back, taking my winter term to work at a theater in Seattle. I was staying with my parents for a few weeks before moving to the apartment I was subletting. The thing no one tells you about moving home in the winter is the painful boredom of it all. I worked nights, and during the days I was a listless ghost, wandering the house and snacking on whatever was available.

I was recovering from a depressive episode that had come to a head a few weeks earlier. When I talked to my therapist, she recommended physical organizing, and this became my mission. I cleared years of clothes out of my closets and off coat racks. So when the bag was sitting on top of a pile of clothes, I grabbed it on a whim on my way to work. I found that when I paired it with a blazer, some jeans, and one of my boyfriend Bee’s shirts, I didn’t even notice my breasts. That was all I ever wanted, really.

My breasts were small, but they were still there, and their smallness was almost salt in the wound. They couldn’t be the flat chest I wanted, but they also never really grew in. I wanted to exist in both genders, but the tiny peaks of my chest ensured I existed in neither.

I had felt this way since I was 13, and could go weeks or months without feeling it. But without warning I would suddenly become aware of them, tearing through my closet to find the too-small black sports bra I used to flatten them. I was unwilling to buy a binder. It seemed like a declaration, the kind I was nowhere near ready to make yet. But for almost a decade I had the sports bra. And for that winter, I had the bag.

It was perfect. I carried my laptop, my bus pass, and whatever food I could cobble together to eat on the long commute home. Over the months of being toted to and from rehearsal rooms, it slowly grew its own pen graveyard and crumpled papers. I carried a holographic knife in its water bottle pocket. It sat on the back of my chair as I took rehearsal notes, avoided creepy coworkers, and chatted with the middle-aged butch in our cast. It hung there as I told the room my pronouns were they/she. It seemed to taunt me from the chair. Look at your outfit. You know those are only half the truth.

Bee wasn’t supposed to happen to me either. He arrived as the boyfriend of an almost-girlfriend. I was fresh off a string of uncomfortable, aborted attempts at relationships with the only out lesbians I knew. We were in the same Sadie Hawkins dance group that last year of high school, and connected over our shared love for the gender-bending designs of Comme Des Garcons. By the next morning, it felt like something in my world had shifted. Our relationships with the girl fizzled out, but our own did not. We joked about the absurdity of our relationship, the lesbian and the boy everyone thought was gay. We remained together when I went off to college, when I came back that winter, and when I flew back across the country the following spring. Gender was on the list of things that Bee and I Did Not Talk About Under Any Circumstances. We both knew, in the way two people who spend all day every day talking to each other Know, that the other was dealing with it. But we also both knew how much the other had repressed it. It felt like a game of emotional Jenga; if one of us pulled out the wrong piece, we’d both fall apart completely.

That spring, Bee came out to visit me for my school music festival. When I saw that Susan Stryker was speaking the same weekend, I insisted we both went. I thought it would be easier if someone else could say what we were unwilling to. I hoped we could have the conversation without having it.

We sat in front of a group of cool, clearly queer upperclassmen. I wanted to turn around and say you don’t understand, we look like a man and a woman but that’s not what’s going on here and I wish I had the language to explain it more than anything but I really don’t. But instead we sat leaning tightly on each other as Stryker talked about her life, her work, about those who came before her. We were transfixed.

That night, Bee started wearing the old blue bag across his chest, insisting a “satchel” would be perfect for carrying all our essentials. Neither of us talked about it.

The day of the music festival was the same as any small festival. We ate overpriced ice cream and lay in a field with our friends. We baked ourselves in the sun and took too many drugs.

Eventually, we went back to my bedroom to change into something more appropriate for the heat of the day.

Bee made a passing comment about a dress on my bed. Emboldened by the drugs, I was finally able to ask, “Why don’t you wear it then?” “Because,” he responded, ‘”people here know me. It’s only been a few days, but they already know me. It’s too late.” I kept pushing, but I knew exactly what he meant. There was an embarrassment in having to change your own definition, an admittance of past failures.

As we walked out of the room, he declared in a wavering voice, “I’m a man. That’s final.” We stepped into the sun. We turned away from my house, back to the open fields of students. The bag remained strapped across his chest. He looked at me. “I think I’m ready to come out to you about everything.”

We wandered the fields. She talked in circles at first, explaining how she’d grown apart from her closest friend when they started working out together, how she disliked her own muscles. She referred to herself in the third person until I got the message. She didn’t have to come right out and say it. I knew, in the way we knew then.

Our friends found us hours later, splayed against each other on my front lawn. When they asked where we’d been, Bee said simply, “I think we broke up and then got back together, but as girlfriends.” We hadn’t discussed it, but I nodded along. It seemed like the simplest explanation for everything.

We spent the next few days in a haze. Bee came out to everyone she could, and I did my best to keep her in a bubble of joy. I told everyone I saw how they should meet my amazing girlfriend. We were able to simply exist, away from anyone we’d ever known.

But Bee had to go back to reality eventually. We packed together, trading items of clothing like Halloween candy. We knew that when we saw each other next, we might be different people entirely. I took her jeans, her high school sweatshirt. I gave her shirts, coats, anything that could be read as androgynous but made her feel femme.

She asked for the bag, though, and I paused. I was selfish. I refused to part with it, She could have anything else, I said. But I needed the bag. It could not anchor both of us at once.

Lucy is an art and theater student splitting their time between New England and Seattle. Their work has previously appeared on The Niche. All they want is a cabin in the woods.

L. has written 1 article for us.