Warning: Spoilers ahead for season three of GLOW.

With each and every season, GLOW gets gayer and gayer, and that’s the kind of character development I like to see in shows, friends, and myself, thank you very much.

In its third season, GLOW takes the show to Las Vegas, and the new setting provides a perfect backdrop to the season’s many intersecting storylines. Vegas is a transient, weirdo bubble, and most of these characters are going through huge transitional moments in life. Debbie is a producer now, but she struggles to spend so much time away from her kid and also wants to step on the necks of all the men who don’t take her seriously (and eventually does, though unfortunately not literally). Ruth faces the possibility that she’ll never achieve her true dreams of being a successful actress. Cherry second-guesses her baby plans with Keith because of the actual physical changes it will bring about to her body, which is how she makes her living (I can’t believe I’m about to say this about straights, but their marriage is one of my favorite depictions of marriage on television). Tammé pushes her body to its very limits for the sake of her work. Sheila de-wolfs and reaches for new performance heights. Much of the season is about defining and redefining success and happiness, these characters clawing at the things they want with a kind of fervent desperation that it takes for women to chase dreams within the patriarchy.

Arthie’s huge transitional moment is her new relationship with Yolanda, in full swing at the top of the season. Which means, yes, *announcer voice* SEASON THREE OF GLOW HAS LESBIAN SEX: 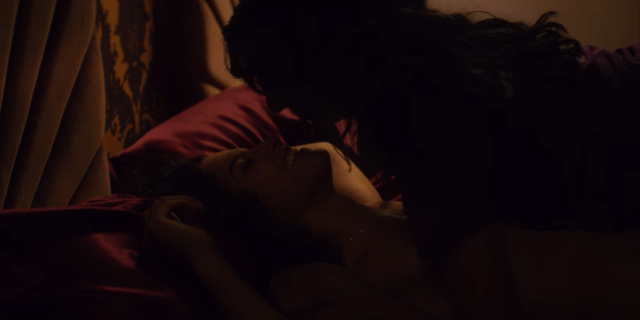 Season two sees Arthie through the realization that she has feelings for Yolanda, and in season three, she wrestles with what that really means, leading to broader feelings about her sexuality. Honestly, I think we’re all still a little in shock about how NOT gay the first season of GLOW (subtext aside) was. Season three serves up a lot of candid conversations between Arthie and Yolanda about queerness. As the only out queer women on the team, they also have to grapple with homophobia from their own friends. Yolanda and Arthie are in different places with their own identities, and some of that manifests as relationship drama throughout the season.

My one complaint would be that they’re kind of just slotted as The Gay characters now, and they don’t seem to have any storylines outside of their relationship with each other. That’s especially frustrating, because a great asset of GLOW has been the way it develops its characters and gives them lots of different stories. They aren’t the one-note caricatures that they play in their wrestling show. But when it comes to Arthie and Yolanda, there’s little else going on other than this coming out arc. The conflict between them isn’t always well developed (why, for example, does Arthie bear the weight of their breakup when Yolanda said some pretty hurtful and messed up things about her sexuality?).

And there are opportunities for Arthie and Yolanda—again, the only queer women on a show that somehow brims with Big Dyke Energy—to be plugged into other storylines that end up being wasted. In the brilliant “Freaky Tuesday” episode, for example, every girl switches characters for a night, a fun enough gag on its own, but GLOW uses it to tell deeper, more nuanced stories, as with Jenny who has to hear the racism of her character delivered by a white woman, which throws her into a whole new level of cognitive dissonance. Wouldn’t it make sense to have Arthie have a similar experience with someone playing her racist character?

Look, part of GLOW’s appeal is that it feels like a true ensemble show, so there are a lot of characters to balance all the time and not everyone can be in the spotlight for too long. But the show still manages to dig into a lot of deep stuff for several different characters this season. We’re out here trying to heal genocidal trauma through Jenny and Melanie. Cherry and Keith’s relationship has several moving pieces to it. Bash’s sexuality is treated with more nuance. Meanwhile, a lot of the character and relationship development for Arthie and Yolanda is pared down and limiting. At times I’m left wondering what exactly draws them to each other other than the fact that they’re both just the only out women on the team.

On that note, I do have some outstanding questions about GLOW’s third season, which all fall under the umbrella question of HOW DARE YOU?

My first HOW DARE YOU pertains to the show’s central ““best friends”” Debbie and Ruth, whose scenes together continue to tell one of the greatest slow-build love stories of all time, and yet, GLOW is still gal pal-ing them. I hesitate to use the term queerbaiting here, because it doesn’t even really feel like that. It feels like maybe the writers…don’t know…that they’ve written Debbie and Ruth as a couple. And YEAH, I get it, friendships between straight women can be ROMANTIC or whatever, but I’m sorry, are we all…watching the same show?

HOW DARE YOU: Part 2

I can’t believe there’s a devastating breakup scene for a relationship that “never” even “existed.” Also, have you ever heard of platonically being chased through an airport? NO, BECAUSE IT’S NOT A THING.

HOW DARE YOU: Part 3 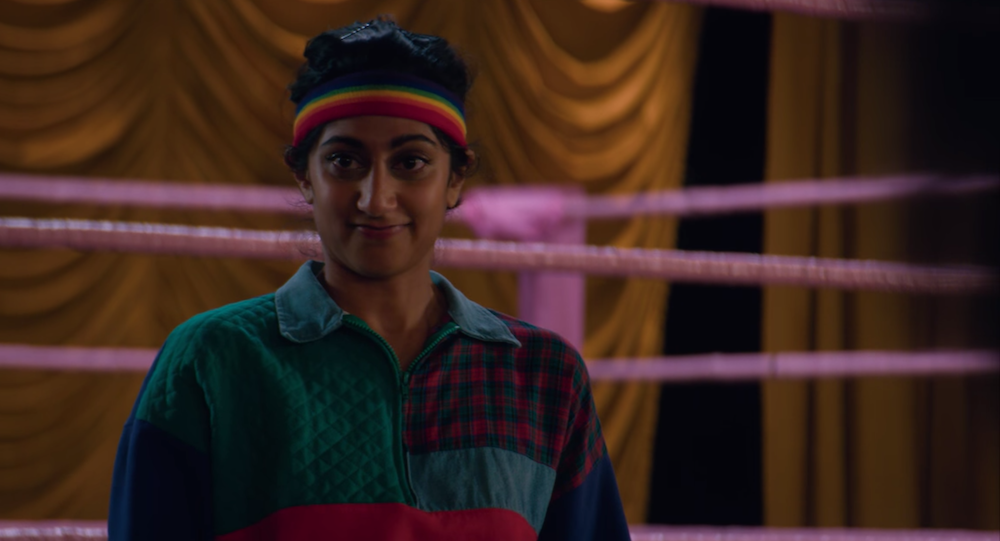 I fully cried when Arthie opens up her secret Santa gift and it’s a full-on rainbow headband. “But Kayla, didn’t you just say that you had some problems with the character being solely defined by her coming out story?” YES, but I still find that coming out story deeply relatable on a personal level, okay?! There are so, so, so few South Asian queer characters on television, and I lap them up like sustenance because I’m so parched for representation.

Speaking of being parched, I will leave you with HOW DARE YOU: Part 4