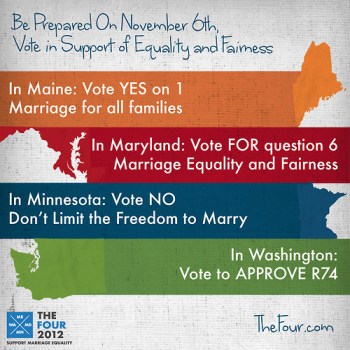 This November, four states have ballot questions about marriage equality — Maine, Maryland, Minnesota and Washington — and we want to win all of them. That’s why New Left Media and The Four have teamed up to make a stunning four-part series of marriage equality ads, the first of which is from Maine. And guys! They have real gay people in the ad! (And yes, there is one straight “ambassador.”) The production values are marvelous and this ad gives me All The Feelings. I can’t wait to see the next one which is set to be released Tuesday, October 9th on the Four 2012’s website.