Previously on The Fosters, Stef and Lena continued their pursuit of flawlessness by (nearly) effortlessly navigating the tumultuous waters of parenting teenagers who: are dating stalker-types (Jesus), are rescuing abused friends from foster care (Callie), are joining invite-only STEM clubs and starting new dance teams (Mariana), are trying to go on world tour with garage bands (Brandon), are perfect (Jude).

The Adams Fosters are getting ready to go on a weekend camping trip and it’s like Home Alone up in there, kids running wildly through the halls with tents and sleeping bags slung over their shoulders, Brandon and Jesus tongue-kissing their girlfriends like they’re never going to see them again, Mariana waving a forlorn goodbye to the hot shower and floor-length mirror, and Jude keeping it together more than any of them despite the serious camping PTSD he’s got from the gay stuff he got caught doing with Connor in that tent on their school trip.

Stef walks in on the very terrifying site of Hayley trying to coerce Jesus into a codependent relationship, so she kicks her right out of the house. 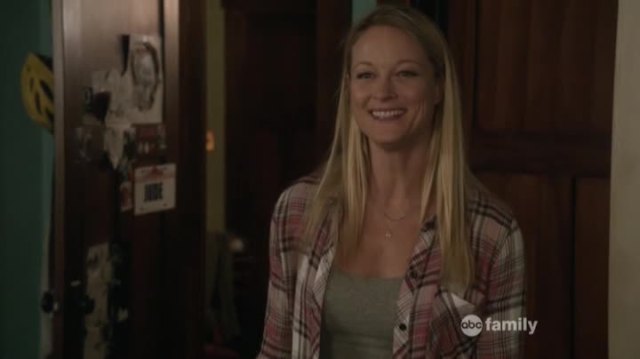 This is my murder-smile. It’s the last thing you see before you die.

Brandon and Lu are out there, making out like there’s no literal tomorrow, and Brandon gets real weird real fast when Callie stumbles out the door under the weight of Mariana’s giant steamer trunks. He tries to cool it with the smooching, but Lu says he’s just being silly; no one cares about dry humping in front of their little sisters. Callie smirks at them from the driveway, rolls her eyes, nearly throws out her back trying to lift Mariana’s junk into the car.

In the kitchen, Stef takes the hardline (surprise!) about phones; she doesn’t want the kids to bring them because she knows they’re going to spend all their time doing group snaps and selfie chats on Twerk.com. Lena laughs affectionately at her and demonstrates the difference between twerking and Twitter. The difference is that one of those things gives Stef lust-eyes and the other one of those things makes Stef’s eyes glaze over with boredom. 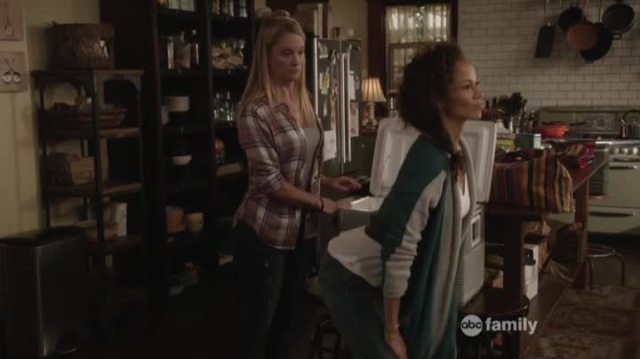 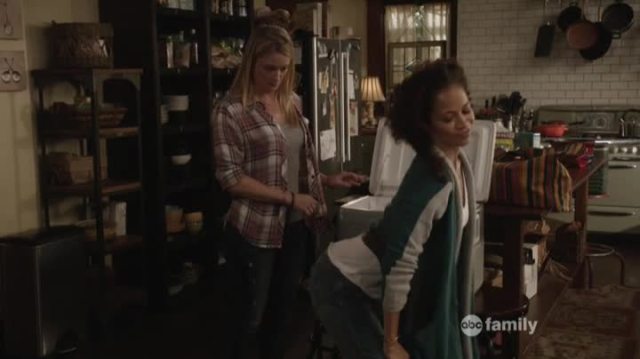 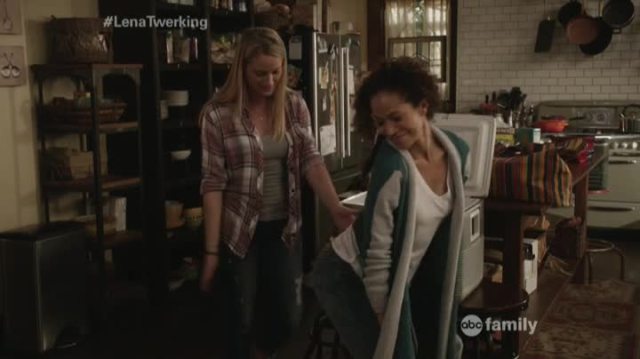 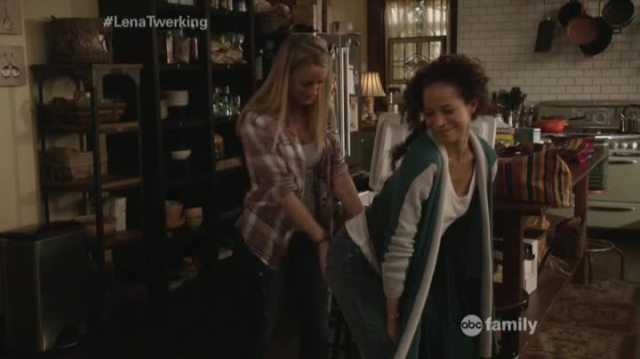 And how can I make it happen more?!

She spanks her wife right on the hams and says to bring a whole thermos of coffee, ’cause after the kids are too asleep to come knockin’, their tent’s gonna be rockin’! I love that #LenaTwerking as an actual ABC Family hashtag. I love it so much.

Lena: If we make them leave their phones here, though, we’ll miss out on the guaranteed hoot of seeing them lose their absolute shit when they stop getting reception.
Stef: Fine, okay. You be the cool mom and I’ll keep being the rule mom.
Lena: Wait, what?
Stef: They come to you for hugs and to me for motivation to live their best lives.
Lena: No, seriously, what?
Stef: It’s cool. It’s fine. I’m fine with it.
Lena: Yes, but if you were ten percent as good as a normal lesbian at sensing even the most subtle mood shifts in all people within a ten-block radius, you would see that you just super hurt my feelings.