Hey, Boston-area Straddlers! Have you been reading a lot of articles about femininity and queer femme identity lately (or do you live them all the time)? Do you feel like kicking off your weekend with an entertaining and eclectic celebration of the diversity of such identities? Perhaps you want to work up a physical and mental appetite before hanging out at Monday night’s Team Pick with Laura. Or do you, like most of us, simply enjoy watching hot queers be variously smart, talented and funny on stage? Good news! The Femme Show is coming to Cambridge, and you are going to it. No, seriously! This is ninety minutes of self-described “queer art for queer people.” It’s “challenging, introspective, brazen, funny, sexy, and gritty but always powerful” – that sounds like a killer cocktail, but it also sounds like you, right? Get over there. 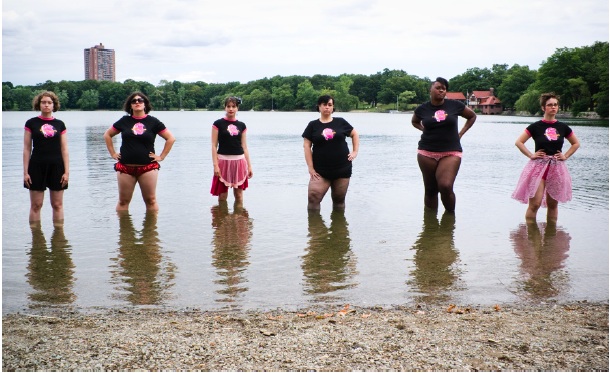 I KNEW IT: THE CAST OF THE FEMME SHOW CLEANED UP THE CHARLES

The precocious brainchild of dancer and activist Maggie Cee, The Femme Show was born in 2007 and baptized in a sold-out Jamaica Plain church hall.  Since then, it has glitterbombed the Northeast, busting genres and stereotypes everywhere from the DC Center to New York’s Queer Spirit Camp. The latest incarnation begins this weekend at the Cambridge Family YMCA Theatre, and features a crack team of new and returning performers doing everything from comedy to spoken word to drag. After inhaling the press release, I’m particularly looking forward to new cast member Bikini Thrill’s politically charged burlesque dancing, and to a segment called “Letter to a Life is Good Lesbian,” in which Show veteran Amy Raina “gently explains life, good and otherwise, to a cute lesbian in a hat and a shirt with a stick figure on it.” There will also be a charity bake sale (fits the venue!), and a slamming after-party (does not, so it’s down the street at Tavern in the Square).

Like all the best things, this show is e-femme-eral – it’s only here this weekend, September 21st and 22nd. Grab tickets for yourself and whomever you want to bowl over online for $12 or at the door for $15; you can also volunteer and get in for free! Show starts at 8:00 PM (look for me in the “Life Is Good (Tonight)” t-shirt). See you there!