It was my birthday a few days ago, so happy birthday to me. My original plans for the day were eating chocolate ice cream for breakfast and then testing Philadelphia’s public nudity laws by naked suntanning on the back deck where I am house-sitting. I ended up going to Little Pete’s and drinking pear cider while watching Nora Ephron movies, which, if you ask me, is a damn good way to celebrate 22 years of existence.

And this brings us to an important point: say you wanted to buy me a belated birthday gift. Say you were looking for something that would complement my edgy haircut and boyish charm. I’ve been told more than a few times that lady-bois such as myself are a hard bunch to buy for, so I’ve done you the favor and compiled the ultimate gift guide for all the masculine of center people in your life. Androgynous? Check. Super cool? Check. Gets you mad queer street cred? Checkity check. Plus, the best way to get your boi crush to make out with you is to give them items that will increase their already impressive swagger.

An important thing: you may notice that there are no fitted items of clothing on this list. As many a masculine of center person will tell you, there is no hell quite like the mens fitting room. Shopping for masculine clothing when your body is anything but masculine can be an intense and daunting task, and a highly personal one. Even if you know your boi’s sizes, I highly recommend another gift idea. There are so many less triggering presents out there that are even cooler than a pair of shorts or a good dress shirt, and they don’t run the risk of being an upsetting item to try on.

I call it Boi Jewelry because it’s not your uncle-who-runs-a-car-dealership’s-man-jewelry and it’s not your this-is-kind-of-androgynous-from-Forever-21-jewelry. I’m really into wood and leather right now because it makes me feel like I’m drinking an expensive glass of cognac while sitting on the stump of a tree I have just felled with my axe. It also communicates that I am simultaneously down to earth and classy. I’m kind of obsessed with this cardinal skull necklace and braille message ring, too.

You don’t need to be a smoker to own a lighter. A lighter is just one of those neat things that comes in handy for a million reasons. Are you lighting a bunch of candles in anticipation of a romantic evening? You need a lighter. Are you at a concert and need to show your enthusiasm? You need a lighter. Also if there is a cute girl standing outside the bar who asks if you have a light, you’re going to need a lighter. I love lighters because the quality ones cost enough to be stand alone gifts, and if you refill them, they last a lifetime. Think of all the memories your boi and their lighter will make together, the places they’ll go. You haven’t just given them a thoughtful present – you’ve given them a best friend for life. Also, I have a lot of feelings about this PBR Zippo because I am “that guy”. 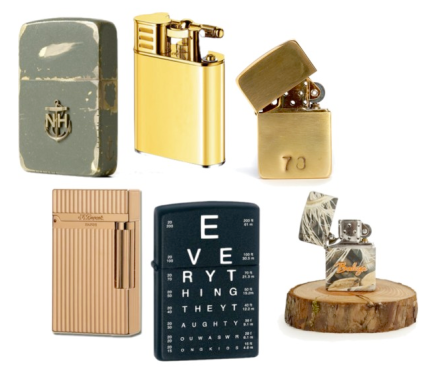 You don’t need to drink alcohol to own a flask. (Do you see the pattern here? Okay, good.) You can fill your flask with juice, or chocolate milk. All of a sudden you are 200% cooler drinking your chocolate milk in public. Take a swig of your chocolate milk flask during class, and you’re the mysterious boi with a tortured past. Girls will be crawling all over you to uncover your dark secrets, but you won’t be able to teach them the ways of the secular flesh because you’ll be too busy refilling your sexy pin-up flask!  Or you can get a space flask because space! Note: do not actually fill your flash with chocolate milk. Chocolate milk doesn’t rinse out of the flask particularly well and it will probably make whatever else you put in there taste a little funny. Unless you like your whiskey with a note of Nesquik. You do you. 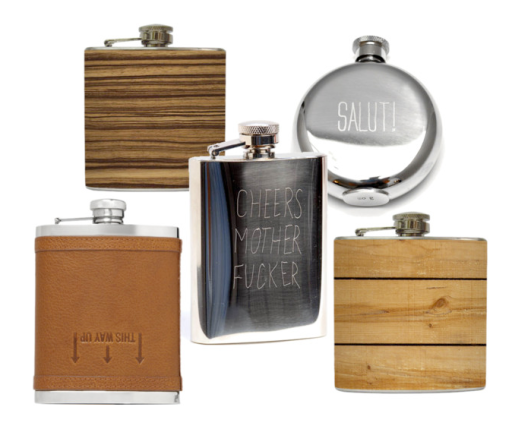 What time is it? Time to be awesome. A classic timepiece is the ultimate accessory. It’s classy because it shows you take the extra effort to look at your wrist instead of lighting up your iPhone. It dresses up an outfit and gives you that extra air of professionalism that maybe your undercut has been undermining. And it comes in a wide range of styles that communicate everything from sensitive bookworm to important/powerful businessperson. I received this watch by WeWood for Christmas and it’s pretty much the greatest. I also used to rock a Nixon and stand by that brand forever. 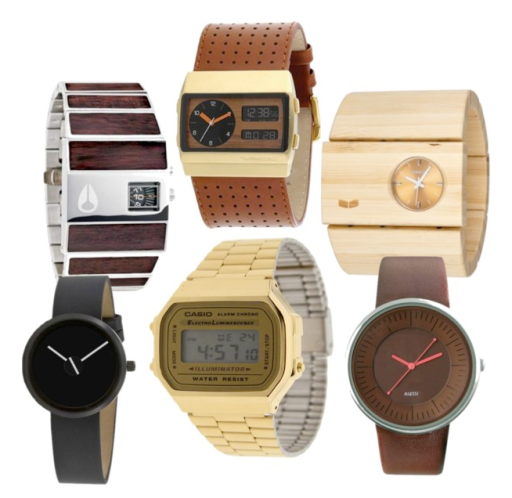 What do gentlequeers love more than cats and brunch? Being dapper, duh. It’s pretty hard to get more dapper than a bow tie, but it’s equally hard to go wrong with just about any form of neck accessory. Let’s face it: they make ladies melt, and they turn an already adorable queer into freaking Prince Charming. A high quality bowtie lasts a long time, is super convenient for every possible occasion your boi could encounter, and it shows that you’re drawing attention to their neck, a.k.a. you want to leave hickies there. I am a bowtie homo myself, but isn’t this tie just the absolute cutest? I want to throw a tea party and give these away as favors. 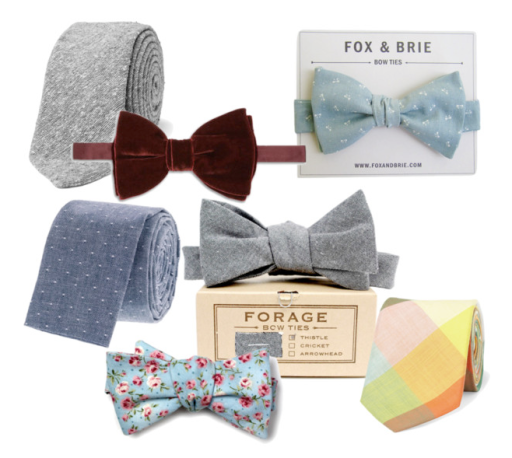 Remember how you didn’t need to smoke or drink to own a lighter or flask? You don’t need a prescription to own eyeglasses either. Thanks to something called a “hipster,” it’s totally cool to wear glasses as accessories. Your boi can mix and match to accessorize the “dapper professor of gender studies” look, or the “semi-douchey record store queer” look. Sunglasses are rad because they have actual health benefits like protecting your eyesight, and come in a wide range of styles, including frat boy chic and Gatsby-era nerd. I was given these Persols for my birthday and they are perfect. I’ve been known to lust over this look, too, if only because my inner Rachel Maddow just wants to get out and play. 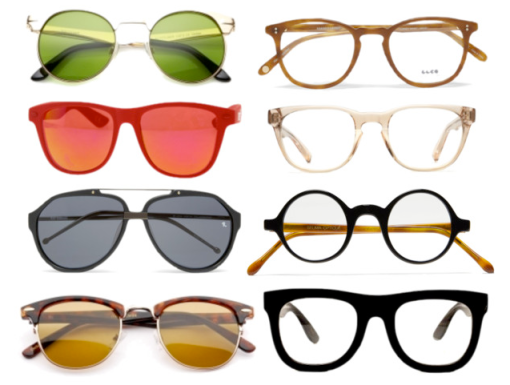 Remember when Paige wore the beanie on Pretty Little Liars? We were like, oh man, she is definitely so gay now. Hats are super gay, and that’s why they’re just the best. Fedoras? Unavoidably gay. Beanies? You 20-something queer, you. Snapbacks and fitted caps? Cocky but charming rascals. Trucker hats? Okay, so you’re *that* dyke at the pride parade, but you own it. Hats are great for edgy haircuts because edgy haircuts have bad days, too, and hats are like concealer for the top of your head. I have an incredibly large and unnecessary amount of hats, but I have no regrets whatsoever. 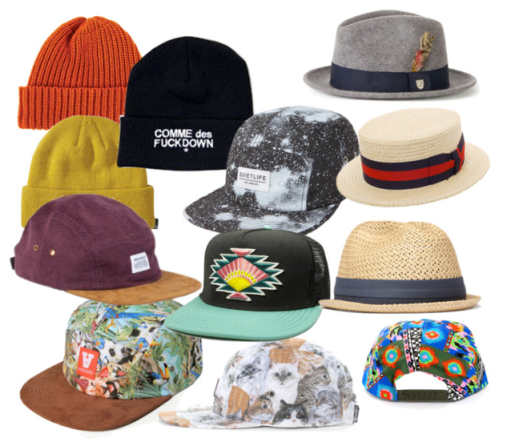 What else is your boi going to carry all of their school supplies and erotic novels and sex toys in? Backpacks remind us of our childhood, which remind us of the nineties, which remind us that nineties nostalgia is in right now, so backpacks are cool again. They’re probably the handiest thing you could get a queer, since they’re perfect for bikes, utilitarian as shit, and look great with a couple carabiners clipped on – one for your set of keys and the other for your nesting girlfriend’s keys! I absolutely positively swear by my Duluth pack and take it everywhere with me because it a) still looks so great and b) can hold everything I own. Give your boi something that says “I want to explore you like Dora” or “I want to be attached to you via harness just like this backpack.” 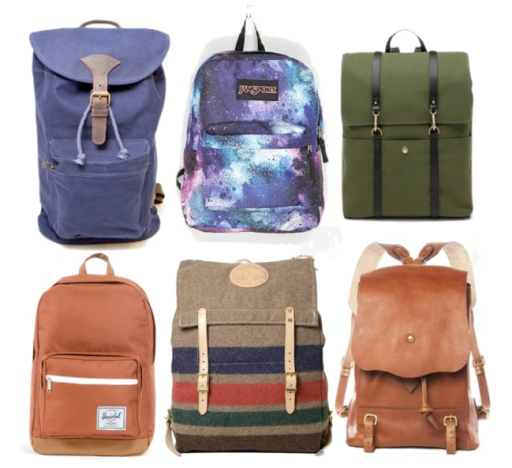 I once met a guy who told me he was an “unapologetic sneakerhead.” I thought he sounded like a douche, but then I realized that I totally knew what he meant! Kicks are an essential part of every boi’s wardrobe. Why do you think we get so many comparisons to Justin Bieber? Because that boy likes his kicks, and we like his kicks, and his kicks look even better on us than they do on him. Kicks are a fantastic present because they’re in that splurge price range, and damn do they look good. I have been harboring a massive crush on these Jeremy Scott x Adidas ones for a long time, but since my money tree didn’t make it through the harsh weather of college, that’s probably not happening any time soon. 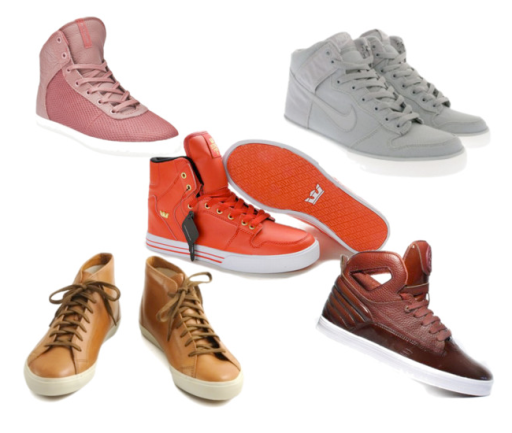 Speakers, headphones, and music players are my go-to gift for all of my friends’ birthdays. Why? Because everyone loves music. Name one person you know who doesn’t listen to music and enjoy it. You can’t, because they don’t exist. They will never exist, their existence is a lie, and no one should hold their breath waiting to meet a music hater. Also, let’s talk bank and the making of said bank, because music accessories are typically in that price range just above what you’d spend on yourself, but not too expensive for reasonable presents. Plus, they can look as nifty as they sound. Wearing cool headphones in public is totally a thing, and come on, look at this speaker hidden in a log. Isn’t that the best thing ever? Don’t you want to buy it right now? You should, because the boi in your life would totally be into it. 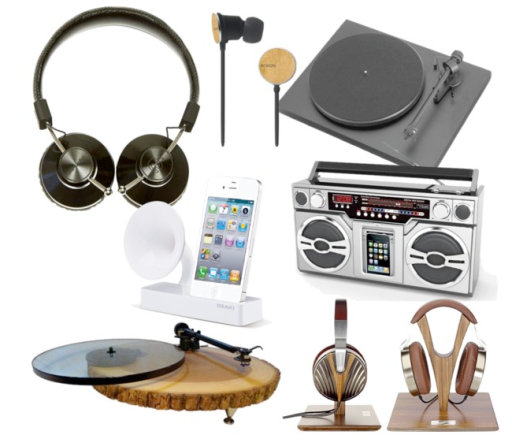 We live in an age when phones are basically an extension of ourselves – if I go out and realize I don’t have my phone, I feel as if I have forgotten to wear pants, or as if someone has forcibly ripped my arm from its socket and beaten me repeatedly with the limb. Our phones say something about who we are, and I want my phone to say that I’m either super gay or super cool. My current iPhone cover does both, as it features Joan Holloway, which shows that I’m into fantastic television and super fantastic ladies. Or maybe you’re into Miyazaki films, or Batman riding a dinosaur. Either way, guess who is happy? You, and the lucky boi with new phone swag.