With the days of being able to openly brag about having once owned half the world thankfully behind us (a fact somebody should point out to Boris Johnson), the UK has been looking for a new identity. We’ve tried Cool Britannia, we’ve tried The People Who Make Downton Abbey, but over the last couple of years we seem to have settled on Messy Bitch Who Loves Drama. Last year, the Tories held a cynical power grab of a vote they never expected to lose, only to have it completely blow up in their face and leave the country in chaos. Less than a year later, they’ve done the exact same thing again. My cat is better at learning from her mistakes, and she eats plastic for fun.

Theresa May called this snap election with the aim of completely wiping out Labour and achieving the kind of majority that would allow her to do whatever the hell she liked for the next five years. Instead, Corbyn increased Labour’s share of the vote by a higher percentage than any leader since 1945, the Tories lost their majority in Parliament and even the newspapers that were hailing her as Thatcher reborn the day of the election are calling for her resignation. However scared you might be about the future, it’s worth taking a minute to just appreciate that. She completely fucked it, you guys. Just look at her face! 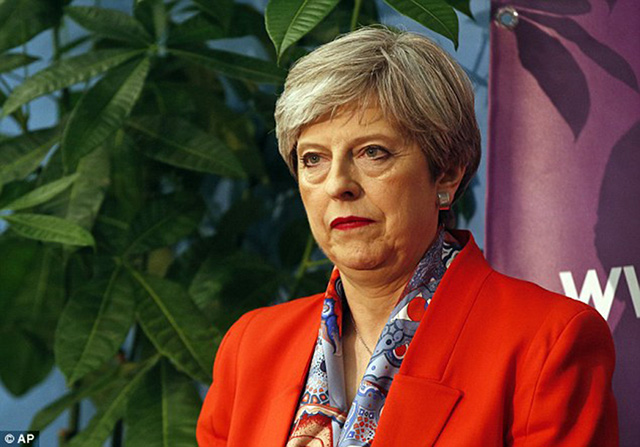 photo via the daily mail

No majority means a hung parliament and a hung parliament means it’s time for another coalition, baby. Yes, we’re on our way back to 2010! Time for everyone to argue about the series finale of Lost, think WikiLeaks is great and still be excited about Marvel movies! Except this time, the Liberal Democrats came right out the gate and said they weren’t open to teaming up again. Probably for the best. So, what’s a minority government to do? Their most obvious allies, UKIP, lost their only MP in the election (and you might want to take another minute to appreciate that). Time to look a little further afield. Like… across the Irish Sea, perhaps?

Most of the time, the mainland’s attitude towards Northern Irish politics is basically

One of the biggest stories in UK politics over the last year should have been the Northern Irish green energy scandal that cost taxpayers almost £500 million, almost lead to the First Minister being removed from office and caused the collapse of the country’s power sharing agreement. Last week’s election wasn’t even the first snap election in the UK this year! But you’d be forgiven for not knowing that, given that it had basically zero coverage outside of Northern Ireland. Once in a blue moon, however, it becomes politically expedient for the English political elite to remember Northern Ireland exists. Enter the Democratic Unionist Party!

Sure, they were the party that oversaw the failed renewable energy scheme. And, sure, the British government being seen to favour one political party in Northern Ireland would further inflame a crisis that has the potential to bring down the entire peace process. But with ten MPs following the election, if the Tories could rely on the DUP’s votes, they’d have a majority (of one, but a majority nonetheless). While the Tories have gone back and forth over whether they’ve reached an agreement over the weekend, their desperate situation — entirely of their own creation! — means they’re going to be reliant on the DUP somehow.

There’s just one problem: they’re complete crackpots. Founded by a fundamentalist evangelical minister and hardline unionist, the party has links to paramilitary groups and campaigned against every attempt to end the Troubles, including the Good Friday agreement. They’re the epitome of old-school far-right conservatism; Northern Irish feminists have spent years trying to raise attention to how atrocious they are, without much luck. While the rest of the UK has turned a blind eye, the DUP has vetoed extending marriage equality to Northern Ireland five times, maintained an almost complete ban on abortion and counts a number of young-earth creationists and climate change deniers among its senior members. DUP-controlled councils used to lock up playgrounds on a Sunday so kids couldn’t have fun on the sabbath. No, seriously.

The idea of the DUP gaining influence in Britain has caused, shall we say, some alarm — even among the Conservatives themselves. Since the early noughties, the Tories have been working overtime to try and rid themselves of their traditional reputation as the Nasty Party. Despite having spent the preceding few decades whipping up homophobic panic to attack the opposition with, they soon identified support for LGBTQ rights as a way to attract socially liberal voters. During the 2010 campaign, David Cameron said that under his leadership, the Tories could “…look gay people in the eye and say, ‘You can now back us… because we now support gay equality'”, despite the fact that less than a decade had passed since he voted against the repeal of section 28, against lesbian couples having the right to IVF and against gay adoption. It was a cynical ploy to rewrite history, but it’s worked; Pink News even named David Cameron ally of the year in 2016 in recognition of his contribution to the introduction of marriage equality in England and Wales. Getting into bed with the rabidly homophobic DUP blows open the entire facade that the Tories ever genuinely cared about LGBTQ rights.

As a result, eyes have turned to the leader of the Scottish Conservatives, Ruth Davidson (no relation. I don’t think). The Tories have long been a joke in Scotland; for a good few years, Scotland was home to more pandas than Conservative MPs. The party was unable to shake the association with Thatcher’s disastrous introduction of the poll tax in Scotland before England and Wales, popular opinion frequently runs more left-wing in Scotland than the rest of the UK; and the Scottish parliament is dominated by the centre-left Scottish Nationalist Party. After over a decade of failing to get more than a single MP elected, in 2011 the Scottish Tories elected Davidson as their leader. 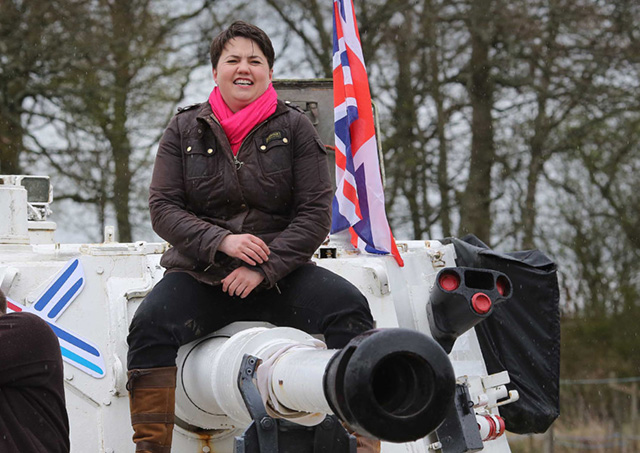 Davidson epitomises the shift towards a cuddlier, softer kind of Tory you could take home to your mum. Her party may support xenophobic, unsustainable cuts to immigration levels, but she also gives speeches about how immigrants should feel welcome in the UK. She might have refused to denounce the inhumane rape clause — a welfare change that limits tax credits to the first two children in a family unless the mother can provide evidence the third child was conceived non-consensually — but she was vocally against Brexit. She takes silly photos of herself straddling tanks. She’s also, significantly, an out lesbian. She’s still loathed among most of the queer community, but her rebrand of the Scottish Tories has been incredibly effective among the general population.

The Scottish Tories are now the second largest party in Scotland and the official opposition in the Scottish Parliament. They have 13 MPs in Westminster after gaining 12 seats in last week’s election, more than they’ve had since 1987. Where May has suddenly found herself a fragile and deeply disliked leader of a flailing party, Davidson is the popular architect of an unlikely success story. Rumours are circling she may even split the Scottish Tories from the main party following the disastrous election results in England and Wales.

Soon after news of the DUP alliance came out, Davidson tweeted a link to a speech she gave at 2016’s Belfast Pride, implicitly criticising the deal. On Friday evening, Davidson told the BBC that she had ”received assurances” from the Prime Minister that existing LGBTQ rights in Great Britain will be safe, and that Theresa May would try to use her influence to advance LGBTQ rights in Northern Ireland. At the same time, however, a senior Conservative MP was raising the possibility that abortion time limits could be lowered in Great Britain as part of the party’s discussions with the DUP.

In Davidson’s statement to the BBC, she said that LGBTI rights were more important to her than her party. It seems, however, that women’s rights aren’t quite as important. Davidson’s so-called progressive values — the values that have fuelled so much of her and her party’s success — extend exactly as far as they benefit herself. Ruth Davidson, the Scottish Tories, the main Tory party — in the end, LGBTQ rights have only ever mattered to them as long as they can get something out of it.

The Tories have spent over a decade using our community to score votes while ignoring and exacerbating the issues we really face. Their pact with the DUP has shown that they’re more than happy to throw us under the bus if it helps them cling onto power. Even Ruth Davidson’s attack on the DUP, which is already being spun as a courageous stand for LGBTQ rights, just shows how craven the queer Tories we’re expected to cheer for are. They’ll happily stand aside while our fundamental rights are dismantled — as long as it doesn’t affect them. Remember that when you see the LGBTory banners at Pride this year.