If you’re looking for a safe place to land to talk about queer TV after a devastating new week, you’ve come to the right place.

This week, Heather chatted with Kristen Kish about her co-hosting gig on Iron Chef and also wrote an ode to her suits. Valerie Anne recapped Fort Salem and will continue through the final season! Natalie wrote a primer on Uncle Clifford and P-Valley’s second season. And Stef R. reviewed HBO Max’s new abortion documentary, The Janes.

+ After the hellscape of this week, two recommendations to provide you a joyous escape: first, Rutherford Falls is back for its second season on Peacock and it is every bit as hilarious and incisive as the show’s criminally underappreciated first season. This season, Bobbie Yang — the teenage unpaid intern/assistant to Ed Helms’ character, Nathan Rutherford — steps out from their boss’ shadow and launches a campaign for mayor. It’s an incredible season-long arc and it is a breakout moment for nonbinary actor, Jesse Leigh.

+ Second recommendation: the new series, Ms. Marvel, on Disney+ isn’t in our wheelhouse (yet?!) but I add my voice to chorus of folks urging more people to watch this show. Between the music and Iman Vellani’s enchanting performance in the titular role, it has been an absolute joy to watch. — Natalie 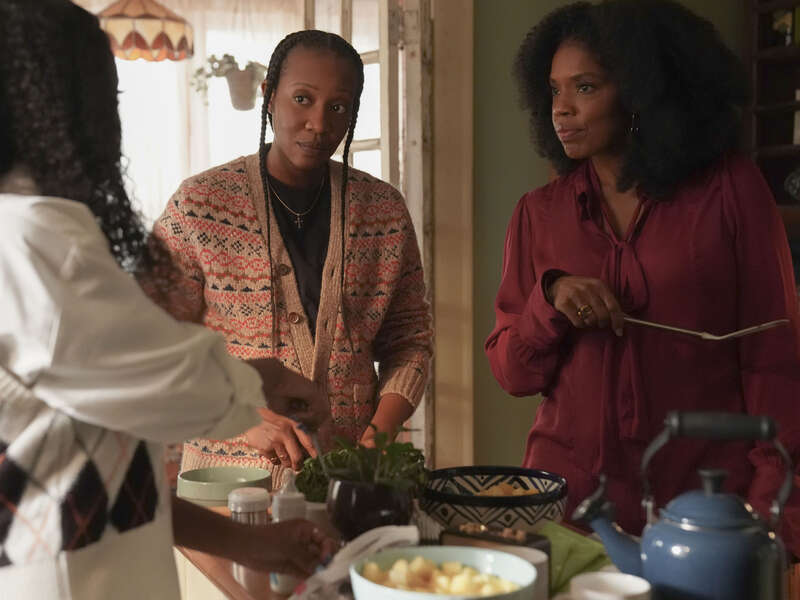 The Chi returns today with a Lena Waithe-penned episode to kick off its fifth season! You can watch it right now streaming on Showtime. Nina and Dre return this season, seemingly having repaired their relationship after Nina’s infidelity, but their “I love you’s” feel a little hollow. I’m excited to see how their relationship evolves over the season.

(Sidenote: the fact that Nina cheated with Da Brat (or a character played by her, anyway) and the season opens with Da Brat’s “Give It 2 You” made me laugh more than it should have. Shout out to The Chi‘s music supervisor!)

But, for me, the biggest question mark heading into the new season was: how would the show handle Imani’s departure? Back in April, Jasmine Davis announced that she wouldn’t be a part of the show’s fifth season so, in lieu of a recast, the show needed a way to squirrel away her character. The show’s solution is, admittedly, not great: while in St. Louis, tending to her sick mother, Imani discovers a video of Trig online, assaulting a local kid. She doesn’t give Trig a chance to explain, she just uses the fight as a pretext for her not returning to Chicago…where, ironically, Trig was down on one knee, waiting to propose. The choice makes very little sense, given the nature of Imani and Trig’s relationship — which had always been rooted in honest, candid communication — and their past together, which included her being the Bonnie to Trig’s Clyde. That being said, as is often the case for instances when a character has to be abruptly written off, there were really no good options here…and, certainly, the nonsensical is preferable to some other options. 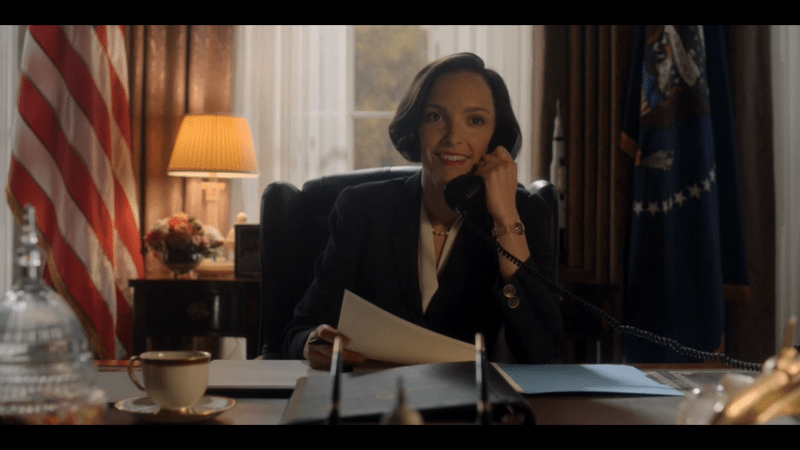 Honestly, Ellen isnt pro-choice, so I wouldn’t have voted for her, but hopefully it leads to queer mayhem on this show?

This season has been about the race to Mars, at first between NASA and Russia, but now there’s a third contender: rich people! It has been a lot of blah blah Ed is whiny, blah blah space explosions, blah blah Gordo’s son is still in love with the woman who helped raise him and it’s making everyone supremely uncomfortable. And for some reason, Ellen has been mostly MIA. We have gotten most of our updates about her via news clips, sans one brief scene where we learned she’s still playing house with her beard and their son, and one where she recruited a Vice President who would absolutely out her if he had the chance. But this week, we caught another brief glimpse and we can now officially call her Madame President. And the world might not know it yet, but they have a lesbian in the White House! I don’t know why her journey has been happening largely off-screen but I’m hoping her last line of the episode means we’re about to see more of her, because she says, and I quote, “Let’s kick their asses.” I don’t even care whose asses she kicks, as long as I get to watch it happen. 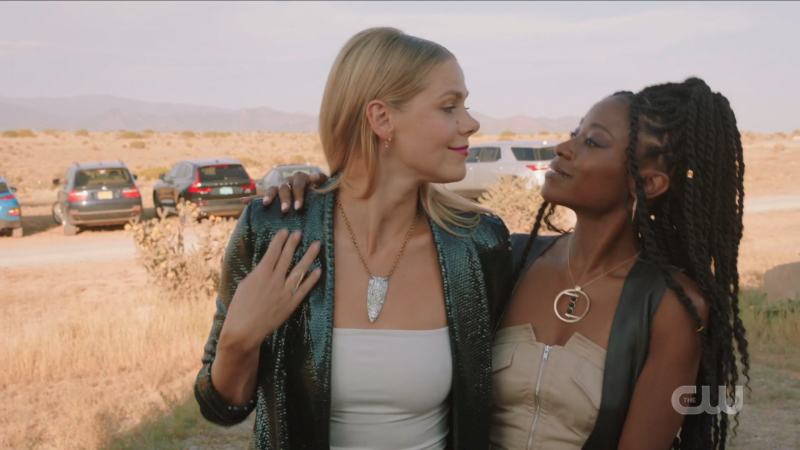 :pouts: THIS is what I want! This right here! Stop threatening to take it away from me, show!

This week’s queer shenanigans on Roswell involve Isobel taking Anatsa to a wine tasting, only to run into Kyle and his date, Kira. Isobel is still feeling weird about mind-manipulating Anatsa, so she doesn’t want to be alone with her and quickly forces the situation into a double date.

Oh before we finish the date, in other queer news, Shivani and Allie’s daughter is sick, which is why she’s so keen on finding alien DNA that has healing properties.

Okay back to Isobel. As the date goes on, Isobel looks like she’s about to accidentally launch herself to the moon with how antsy she is as Anatsa and Kira talk about the bank robbery. Anatsa says she became a journalist because she admired Lois Lane growing up, and little does she know how much like her she grew up to be, unaware of the fact she’s dating an alien.

When Isobel gets Kyle alone, she tells him that she knows Anatsa is perfect, and she loves her, but ever since she mind-bended her, she feels like a monster, like everything she says is a lie. Kyle promises she’s nothing like her manipulative ex, but encourages her to tell the truth and be honest with Anatsa. But when she goes to do just that, and Anatsa asks her what she’s been keeping from her, Isobel gets defensive and asks for distance instead. Here’s hoping they can work it out because I just super duper don’t want whiny Kyle to get his way!!