Yesterday we were served up a reminder that even being incredibly homophobic and conservative doesn’t mean you don’t have every reason not to be. Take, for example, Newt Gingrich. This guy is hard to take seriously for so many reasons, but nevertheless he still seems to be perceived as a viable Republican presidential contender. He is also against gay marriage. On this topic and his presidential campaign, Gingrich’s lesbian step-sister, Candace Gingrich-Jones spoke to Rachel Maddow and it was something to behold!

Gingrich-Jones has been an outspoken advocate for queer equality ever since her half-brother became the speaker of the house in 1995. Her 1996 autobiography, The Accidental Activist was a hit and she currently works as Associate Director of Youth and Campus Outreach for the Human Rights Campaign. Also, she made a guest appearance on the Friends episode “The One With The Lesbian Wedding” where she officiates the lesbian wedding. Check it out! 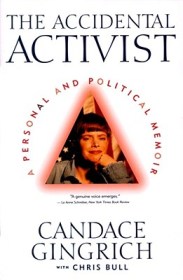 The fact that people are taking Newt Gingrich seriously for the presidency is worrying. On the other hand, watching two out lesbians talk politics makes me giddy, so there’s that. Queerty shares a few highlights from the interview, including the awkwardness of holiday events at the Gingrich household between the brother and sister and their partners:

“We’ve always been mutually [respectful] of each other and our abilities and our desires to change the world…  The catch is, when they’re at a Christmas gathering sitting across the dinner table from us, he and Castilla still have way more rights than me and my wife, Rebecca, and I do.”.

Would you mind passing me the right to be federally recognized as legally wed? 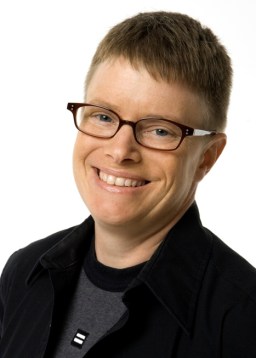 My favorite part of the interview may be when Gingrich-Jones shares that though she invited Newt and Castilla to her wedding, they didn’t attend (although they did send a wedding gift). In a gentle dig, Maddow inquires, “Was it from Tiffany’s?” to which Gingrich-Jones calmly replies that she is not a liberty to say.  (In May it was revealed that Gingrich owes $500,000 to Tiffany’s.) And then there was the part  where Gingrich-Jones clarified that Gingrich is really pronounced “GingricK,” with a  K instead of “GingriCH” like Richie Rich. You gotta laugh, or you’ll cry.

Keeping up with the current absurdity of presidential electoral politics can be a drag. Some may find it disappointing that Gingrich-Jones didn’t use this opportunity to discredit her brother more fully, but the fact that she is using her relationship to this right-wing bigot to make noise for human rights to the extent that she has is no small matter. It’s encouraging to see Gingrich-Jones working for human rights ultimately as a response to the political life of her homophobic brother — and thoroughly enjoyable to see her discussing it with Rachel Maddow.

Gingrich-Jones is voting for Obama.