So far, 2016 has been a pretty disheartening year for queer women who love TV. Our longtime go-to show, Pretty Little Liars, inexplicably did away with most of its gay content; Faking It got the boot on MTV; shows with lesbian and bisexual characters have been nixed before they even made it to air; and the deaths. Lordy, the deaths. We’ve lost 16 lesbian and bisexual characters this year, bringing us to a total of 156 dead gay women in TV history. ONE HUNDRED AND FIFTY-SIX.

One bright spot on this gloomy horizon has been the unprecedented and (honestly) shocking success of the LGBT Fans/Viewers Deserve Better movement that organized around Lexa’s death on The 100. In less than three months, queer fans of the show raised $125,000 for the Trevor Project, worked with TV writers and showrunners to create The Lexa Pledge, and forced the damaging effects of the Bury Your Gays trope into mainstream pop culture consciousness for the first time ever. Variety, Entertainment Weekly, The Huffington Post, BBC, Vox, Salon, The Washington Post: Well-respected entertainment websites and magazines have sbegun talking about LGBT TV characters in a way they’ve never done before. Riese and I gave multiple interviews to various magazines, newspapers, and radio stations about things we’ve been writing about — but no mainstream publication has been asking about — for our entire careers. There’s even a ClexaCon on the way!

Tonight is The 100‘s season three finale. And just in time, LGBT Viewers Deserve Better have unveiled three billboards in Los Angeles, with a fourth one expected to go up in Santa Monica early next week. 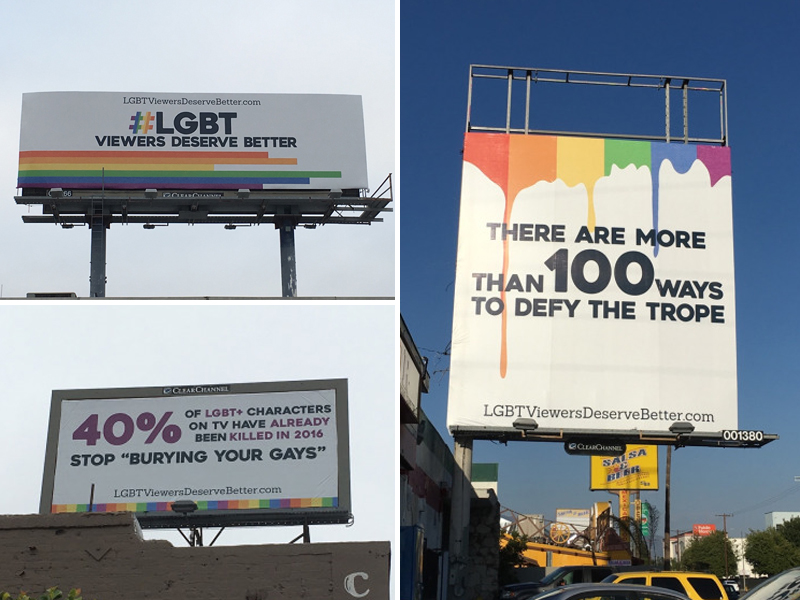 I know I’ve said this at least 20 times by now, but I’ve never seen anything like the movement surrounding Lexa’s death. In eleven weeks, queer fans of The 100 have completely revolutionized the conversation about about how TV treats its LGBT characters, and they’re showing no signs of slowing down.

Our The 100 recapper, Karly, will be back tomorrow with some thoughts and feelings about tonight’s finale. Until then, Oso throu daun ogeda!