Well, it happened. Eleven weeks after The 100 killed off Lexa and gay lady fandom finally revolted, the finale reached our teevees, bringing Lexa with it one last time.

After a long journey, Clarke runs out of options for a new commander and decides to install the flame inside herself, with help from Ontari’s nightblood. Abby and Murphy help, but Alie’s army is knocking down their door. Clarke wakes up in the City of Light, and it’s present-day downtown Vancouver. This is the Grounder valhalla? Grounders didn’t even use electricity: they should probably ask for a refund. While Clarke tries to find the kill switch, she’s passed by absentminded yuppies trying to make it to their 9-to-5. But after a while, they begin noticing her presence and know she doesn’t belong. She’s bad code. So they chase her.

Clarke can’t fight all of them and just as they start to overwhelm her, Lexa swoops in in full Grounder gear and wielding two swords. Lexa quickly dispatches the wave of agents as Clarke lies on a set of stairs and reaches for Lexa. Clarke can’t believe she’s here. They embrace, but soon Clarke collapses; her body is rejecting the flame. Abby and Murphy work fast to make sure enough of Ontari’s blood transfers to Clarke, just as Clarke seizes in Lexa’s arms. As soon as she stabilizes and is able to sit up, Clarke kisses Lexa. And Lexa moves a lock of hair away from Clarke’s face. Their reunion is interrupted because Alie is changing the Matrix and they’re running out of time. 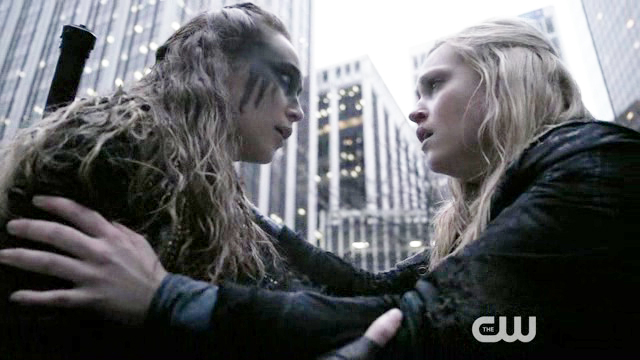 Why do I suddenly feel 60 percent gayer?! 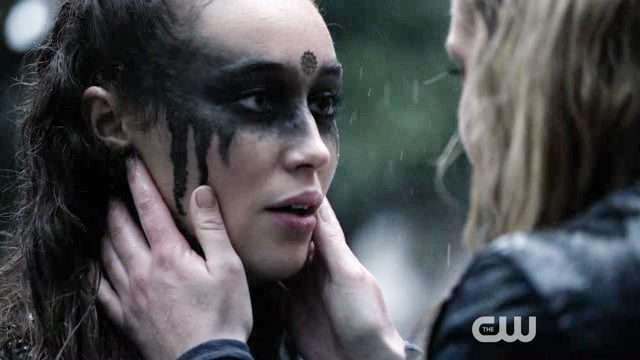 Lexa doesn’t know much about the City of Light, but she does seem to know it’s a program of some kind, and says things like “firewall” and “upload.” This is the same person who refused to use guns and used candles for light, but okay. Sure. So Lexa and Clarke have to find the kill switch in ten minutes, inexplicably because Clarke’s dad’s watch says so. A girl on a bicycle with the infinity symbol (Beca’s counterprogram to stop Alie) will lead them there.

When they reach the end of the trail, Matrix-Jasper, Jaha, and a ton of people wait to stop them. Raven finds a shortcut to lead Clarke to the kill switch, in the form of a hatch that leads to a virtual recreation of Beca’s ship.

Lexa will hold off the enemies and nods goodbye. Clarke grabs her and breathes, “I love you” (a thing was possibly added in post-production), and Lexa replies, “I’ll always be with you” before heading off to her final battle. Time was running out, but Lexa was on the verge of tears when Clarke was just going to leave Polis for a little bit. But when Lexa has to say goodbye forever, she doesn’t say I love you back? I don’t buy it. They should have fixed that in post-production too.

Anyway, Clarke meets Alie and Beca in this virtual ship. She has only minutes to flip the switch, but Alie informs her there are still leaking nuclear missiles that will kill everyone on earth. Again. Their only salvation is to stay in the City of Light. Clarke wouldn’t have to be a leader anymore; she wouldn’t have to bear this burden of guilt. Clarke is so unmoved by this speech it’s impressive. She flips the switch and wakes up in the real world, just as Alie’s mindless robots are about to kill everyone. Everybody who’s taken the chip is now fully feeling the memories and pain they’ve been shutting out. Clarke’s shoulders are heavy from knowing everyone is still in danger and Octavia finally kills Pike. This ending seems happy for everyone, except when I realized Octavia and Clarke don’t have anyone to hug in celebration.

When I was a kid, I saw episode of  the ’90s Nick cartoon Doug that I think about often when dealing with my anxiety. In the episode, Doug leaves a theater halfway through a horror movie because he’s so terrified of the monster in it. Afterward, he has recurring nightmares of this monster trying to attack him. At the end, he forces himself to watch the whole movie and he sees the zipper on the back of the monster suit. The monster isn’t real. In his next nightmare, he unzips the suit and sees just a guy inside, or three puppies stacked together. Something like that.

I felt this way about The 100 finale. I wanted to see Lexa, but I was so anxious about the speculation around it. I heard Clarke’s memories of Lexa were going to be erased and that we’d see Lexa die again. I was dreading watching it. But I forced myself to watch and I saw the monster suit. The plot was so thin that it was laughable and it ended with Clarke, again, making a decision that could potentially save and end lives. But this time it didn’t affect me. The only thing I’m happy to report is that Clarke was finally given some of the agency she had before: she was able to make a decision and didn’t apologize for it. Yet. 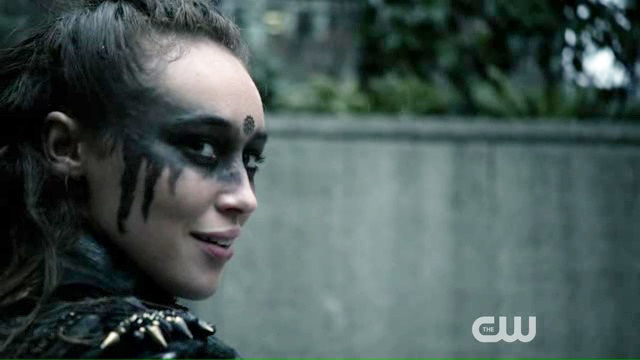 Of course it’s happening inside your head but why on earth should that mean that it is not real?

Lexa might not have seen peace in her lifetime, but her legacy will be equality in representation, in defying the tropes, and in holding creators accountable for minority representation. In the billboards, the panel discussions at huge festivals, and in her own fan convention! That makes me happier than any two minute reunion scene. Lexa will never leave us. We’ll keep her alive inside us, just like Clarke will.