I can still remember making my first Thanksgiving dinner. It was the year I graduated from college; I was semi-employed and living at home with my parents. Usually the big dinner was my mom’s thing, but she was handing the reins over to me. After watching an episode of Semi-Homemade with Sandra Lee on the Food Network, I had suggested that we try her recipe for a turkey with a cranberry orange glaze.

If you want to try it, you can make Thanksgiving this year, she said.

I think she was secretly relieved to no longer be the one who had to handle Thanksgiving dinner anymore. Making a whole holiday dinner felt daunting to me, but if I was doing it, I was going hard. In addition to the cranberry orange turkey, I was also attempting to bake my first pies: apple with a lattice top, and triple chocolate pumpkin. I was fine with making the macaroni and cheese and yams because I had been doing those for a few years. The dinner was largely a success (I burned the apple pie crust and my ganache didn’t spread) and with that, my role as the Thanksgiving queen was born.

I have never been very big on traditions. My family celebrated holidays, but they were never steeped in traditions. Thanksgiving became the one tradition that I wanted to uphold. It was my day, the day where I got to do what I loved the most. I spent two days in the kitchen, listening to music while I puttered around, chopping and grating. I feel most serene in the kitchen, and creating such an elaborate meal for people I love makes me feel great.

Ten years ago, I hosted my first Friendsgiving, which was really exciting for me. It was my first Thanksgiving in a new state — my boyfriend at the time and I had moved from New York City to Los Angeles at the beginning of that year, away from our families. I had some other friends who were in a similar position, and since I love to feed people, I invited them to dinner. A few days before, my boyfriend’s sister and mom decided to join us. I was in my element, making a large meal for people I enjoyed spending time with. I had all of my greatest hits, including the cranberry orange turkey, which had become a staple. That year was a major upgrade from the year before, when I had made a feast for two largely in the living room because our tiny NYC apartment didn’t have enough counter space to hold a mixing bowl. I twirled around our much bigger LA kitchen, dancing to Christmas music and trying to keep our puppy from stealing food. 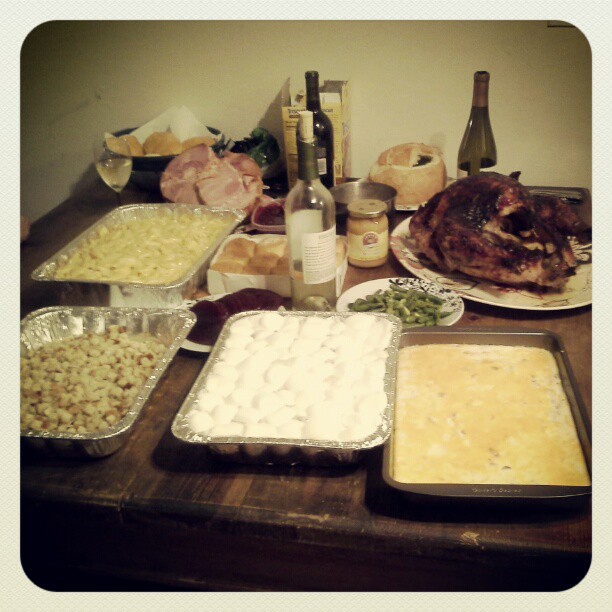 Even though everyone at Friendsgiving didn’t know each other, you’d never know it. We ate, drank, watched TV, and had a really good time. By the time I collapsed on the couch exhausted and happy, I knew I had cracked the code to the day. This is how it should always be, I remember thinking to myself.

The following year, I tried to recreate that same energy, but life was very different. I had given birth to my son two months before, so much of the menu was pared down. And the whole day had an air of tension about it. My boyfriend had decided to send our son and I to live with my parents and booked me a one way ticket to NYC. I tried to muster up my usual Thanksgiving cheer, but my heart wasn’t in it. It’s hard to enjoy your mashed potatoes when you know what’s coming. After everyone left, I sat on the living room floor, packing up my and my son’s things. The next morning, we left.

My son and I spent three and a half years in New York living with my parents. But thankfully, my Friendsgiving traditions didn’t die like I thought they would. My (then) best friend had a kiddo the same age, and we decided to team up and host Friendsgiving with her neighbors and another family we knew. It felt like those Thanksgiving celebrations you see on TV: The kids were running around, there was food everywhere, football was on. I was glad to have the tradition continue, but as much as I loved it, the day didn’t feel like mine anymore. I wasn’t the host, I was just a participant. And who am I on Thanksgiving, if not the hostess with the mostest?

In 2017, my son and I moved back to LA, and I once again got to take my rightful place as Thanksgiving host. It was a significantly scaled back event simply because my apartment was too small to host too many people. My friend Jess came, and it felt like a very full circle moment because she was at the last Thanksgiving I hosted before I left LA in 2013. At the time, Friends was still on Netflix, so I queued up all the Thanksgiving episodes for us to watch during dinner and it was a really fun night. I felt like I was back in my element, and it felt great. The next two years, my friend and her daughter came over on Thursday. On the day after Thanksgiving, I went to another friend’s house because she and her husband threw a Black Friday Friendsgiving.

Obviously, Thanksgiving 2020 was different than previous years. My partner and I had met earlier that year, and she moved in that summer. It was going to be our first real holiday together, and it also happened to be our nine-month anniversary. Obviously, she had eaten my cooking before; I was the one who made dinner every night. But she had never had one of my Thanksgiving dinners, and even though it would just be the two of us eating it, I wanted to give her the full experience. Just because we were in the middle of a pandemic didn’t mean the day wasn’t going to be special.

On October 1, 2020, I bought her an engagement ring. We had been talking about getting married practically since the beginning of our relationship, and we both knew that proposals were going to happen in the next few months. Neither of us knew who was going to propose first or when. To me, Thanksgiving was the perfect time to propose. I was going to give a whole speech about how thankful I was that she had joined our family before pulling out the ring. I’m not one for grand gestures, so this quiet proposal felt like the exact right thing to do.

The dinner was delicious, if I do say so myself. I knew I didn’t have to impress her because she already loved me (and my cooking), but I still wanted to impress her. After dinner, we sat in bed and watched A Charlie Brown Thanksgiving while the kiddo played and the cats groomed themselves. Suddenly, I got nervous. Was I really about to PROPOSE?! It wasn’t that I didn’t want to ask her to marry me; I had never been more sure of anything in my life. But what if it wasn’t special enough? What was I going to say? I hadn’t written anything down, which is unlike me since I’m a writer. Should I get down on one knee and ask? My thoughts were racing, and she could tell.

“I want to do something…” I said, shifting in my seat.
“Okay. Well, I’m going to get a glass of water, so you have a minute to decide.”

When she walked into the kitchen, I scurried to the dresser to get the ring out of the drawer I had been hiding it in. The ring box was too big to fit in my pocket without being obvious, so I shoved the ring in my pocket before going to the bathroom to collect myself. Then I sat down on the bed and made a rambling speech while our oblivious kiddo played with his toys and one of the cats was literally licking her butthole. I may not have planned it, but it was exactly the way it should be. Even though it won’t always fall on a monthly anniversary, Thanksgiving will always be a day we celebrate (aside from the obvious reason.) 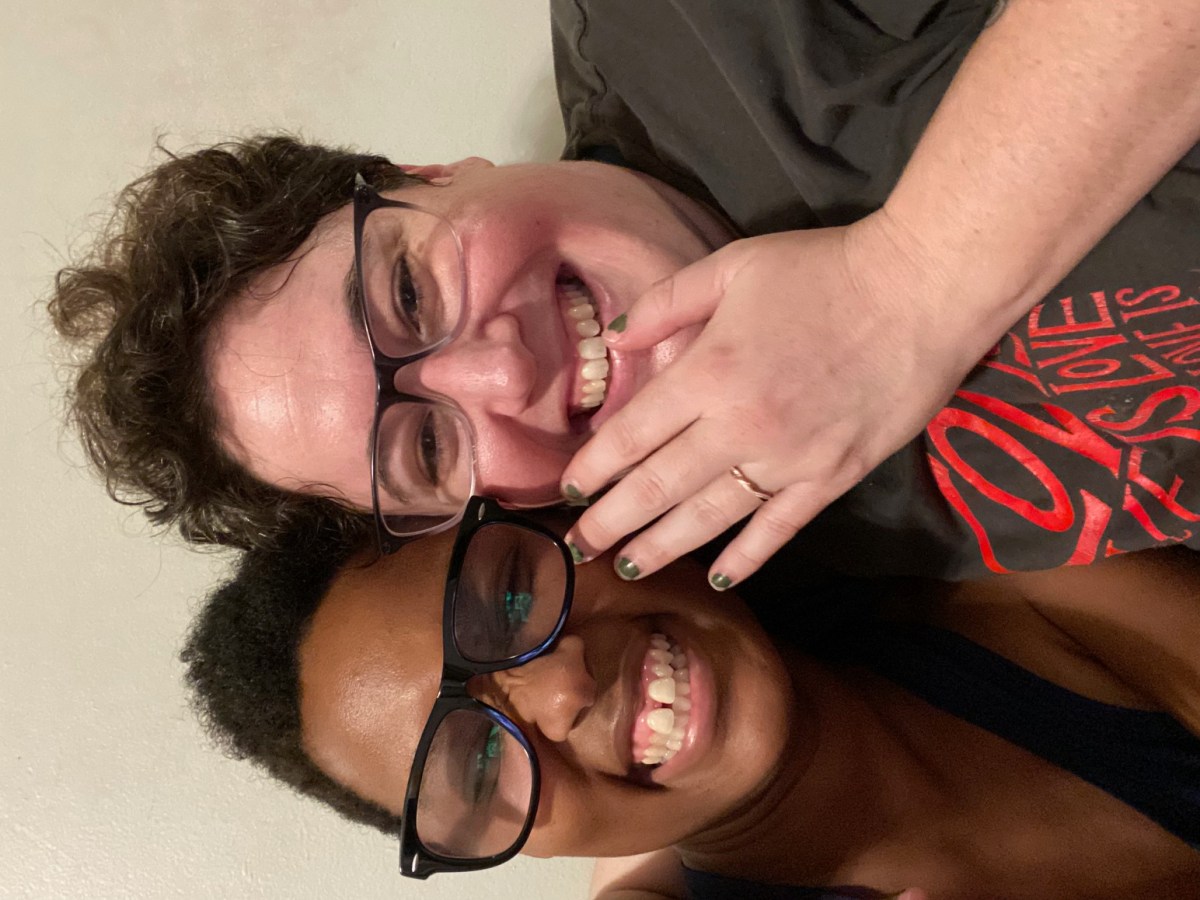 Last year was our first year to properly host Thanksgiving since we got together. Over the summer, we had moved into a bigger apartment and could host a group. Everyone, including our kiddo, was vaccinated and it felt good to have a house full of people again. I had definitely missed having everyone over! Things weren’t “back to normal,” but it was comforting to have that small taste of normalcy I had been craving. It felt good to have people sitting around the table together. I made the ever-present cranberry orange turkey (I don’t think my fianceé will ever let me make something different, not that I mind) and smashed potatoes for my future father-in-law.

I look forward to many more years of hosting Thanksgiving. We’re hoping that next year my parents will be able to come from New York to celebrate with us. I’m glad my kiddo gets to grow up having all of our friends and/or family coming over to spend time with each other. I love that I get to nourish my soul and my guests’ bodies at the same time. And now, I get to commemorate the day I asked my love to be mine forever. That’s what I give thanks for every year.

Sa'iyda has written 21 articles for us.