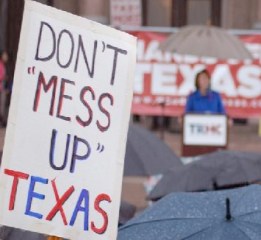 The Republican platform for 2010 in Texas is calling for, among other things, it to become a felony to perform a same-sex marriage within the state. Texas is a state in which it is legal for the government to kill a person with electricity, in case you had forgotten. Here is a list of other things that are not felonies in the state of Texas:

Here’s the official statement of the Texas GOP, as reported by Joe My God:

“We oppose the legalization of sodomy. We demand that Congress exercise its authority granted by the U.S. constitution to withhold jurisdiction from the federal courts from cases involving sodomy. We support legislation that would make it a felony to issue a marriage license to a same-sex couple and for any civil official to perform a marriage ceremony for such. We believe that the practice of homosexuality tears at the fabric of society, contributes to the breakdown of the family unit, and leads to the spread of dangerous, communicable diseases.”

You know what’s in Texas? Houston, the city where out lesbian Annise Parker is the elected mayor. She can’t get married to her partner of 20 years in the city she presides over, and if the Texas GOP’s insane demands are met then maybe she can’t without participating in a felony! I don’t know, that sounds to me like a pretty solid reward for her public service. Thanks, Texas republicans! (@joemygod) (@weblocator)

Pam Spaulding of Pam’s House Blend wants you to know about a movement to “put the politics back in Pride.” Did you know that the first “pride parade” was a riot in response to police violence? Because it was. “The Take Back Pride movement is asking people to still celebrate, but to do something as simple as carrying a sign with the LGBT rights issue that means the most to you. Want ENDA passed? Help educate the community by starting conversations with Pride goers by carrying a sign. Want DADT & DOMA repealed? Make a shirt and talk about about it at Pride with your friends and the people around you.” (@pamshouseblend)

The Transgender Economic Empowerment Initiative in San Francisco has been saved from budget cuts that would have ended it. The program provides mentoring, legal help, and assistance with résumés and interviews for transgender people as well as training for employers on hiring transgender employees. (@theadvocate)

The two largest organizations for queer Jews in the country, Keshet and Jewish Mosaic, are merging to form one large organization that will function under the name Keshet. They plan to “pursue education, community organizing and research of the Jewish LGBT community” and “will put Jewish values and learning in service of the transformation of the entire Jewish community.” (@queerty)

According to defense secretary Robert Gates, there’s still a possibility that Obama will veto a DADT repeal if the military manages to package the bill along with military spending approval that Obama opposes. (@ap) 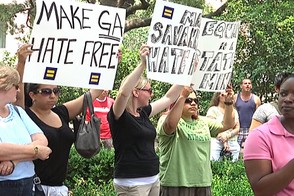 Protesters gathered in Johnson Square to express their anger at the beating of Kieran Daly by two Marines, calling for Georgia to pass a hate crimes law. Kevin Clark, head of the Savannah chapter of Georgia Equality, says “It should only take one or two individuals who have been attacked or know of others who have been attacked to get the attention of someone in leadership in this community– that in our opinion should have stepped forward way before now and condemned the violence and put out a loud call for swift just action here,” (@wsav)

The Rev. Tom Brock, the senior pastor at Hope Lutheran Church in North Minneapolis, is the winner who blamed August’s tornado during the ELCA conference’s gay clergy vote on The Gays. Yes, for real. Brock took his congregation out of ELCA because of their tolerance for homosexuality (and funding for pastor abortions), and has spent countless sermons and YouTube videos railing against you queers. But, what’s this, Brock is a member of a group therapy group for recovering homosexuals?

The custody case of “ex-lesbian” Lisa Miller, who has fled the law with the daughter that courts said should live with her ex-partner and is reportedly living in El Salvador, is going to the Vermont Supreme Court. Lisa Miller’s lawyers are challenging the court’s decision to award custody to her former partner, Janet Jenkins. (@wcax)

A self-defense class for queers has begun in Edmonton in response to a spate of recent hate crimes. The classes take place at Grant McEwan University, and are aimed at ensuring that the queer community has some tools to protect itself. “We are targets. It really breaks my heart to say that,” said Carol McKinlay, self-defence class instructor and lesbian. (@edmontonsun)