Television is one of the easiest ways to get into people’s homes. We see the faces, we hear the stories, we notice the change happen right in front of us. Week after week, season after season, a queer character here, a person of color there (still not a lot of trans* people). But what about the faces we don’t see? What about the names we barely even notice? The creator, who the episode was written by, story editor, executive producer, etc. While it’s easy to see the strides being made in front of the camera, it’s easier to cover up what’s happening in the writers’ rooms of America.

Numbers don’t lie. In the WGA’s TV Staff Diversity Report, they told a story that many people don’t know and don’t care to hear about. Though we may hail some of our favorite shows for having people of color, strong females leads, and LGBT characters, how many of them mirror that diversity in the writers’ room? And how much is that lack of diversity to blame for these groups’ underrepresentation on television or the butchering of their storylines? 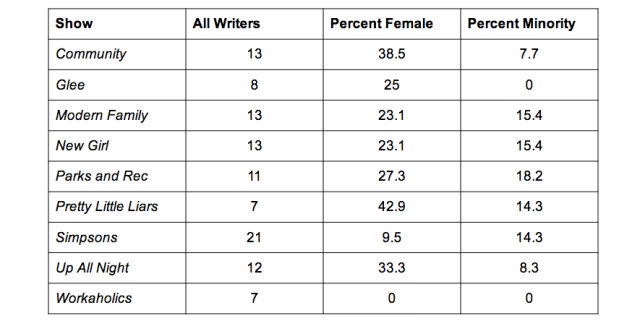 Shows you might expect to buck the trend but don’t.

The study reviewed employment patterns for 190 broadcast and cable television shows during the 2011-2012 season. The 1,722 writer study focused on women, racial minorities, and writers forty or older. Though gains have been made on all fronts, there’s still a long way to go (42 years?). Particularly disappointing standouts include Comedy Central with 3 of 33 staffed being women and ABC Family’s 5.2% minority writers. BET is the only network with at least 50%  women at 55%. BET and VH1 are the only networks with more than 27.6% diversity writers (27.6% being America’s non-white population). Of the big four (ABC, CBS, FOX, NBC), CBS does the worst with minorities at 8.1% and FOX the worst with women at 20.5%.

Some people of course would make the argument that on shows with smaller staffs, you don’t want to tokenize people, right? You want them to feel like they earned their job and that they’re not just there because of their minority status. Yet there are shows with over ten staffers and zero diverse writers (Free Agents, Gossip Girl, Revenge, Two and a Half Men). Then there are shows that have over ten staffers, zero of which are minorities, and then to top it all off, have a dismal number of women. My favorite example of this is How to Be a Gentleman which had 1 female writer of 13. Apparently they answered their own question in the writers’ room: be a white male. The show was canceled after two episodes. 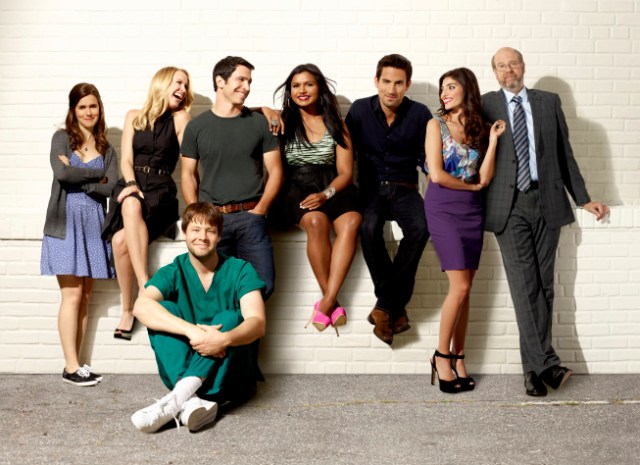 The Mindy Project staffs only one woman other than the creator.

What about the excuses? Men are funnier, there aren’t enough quality minority writers, and so on. The people that make these arguments think there are sooooo many *special* white dudes out there that deserve to be staffed, why would anyone overlook them and go through the arduous task of finding a woman or a person of color? They of course are failing to see that the most special part about them is that they are white males. Sure, white dudes might be a dime a dozen but that, more than their skill, connections, or work ethic, is their most employable trait. When you’re a white dude, you’re SUPPOSED to be there.

The report also finds that among writers who run TV shows as executive producers, women were underrepresented by factor of more than 2 to 1 and minorities were underrepresented by a factor of nearly 5 to 1. Not ratio, underrepresented. In addition to not being staffed on shows, women and minorities aren’t getting pilot deals and they’re not getting promoted. Many believe this is because if you promote someone out of a token spot, then you’ll have to find another one so you might as well just keep them on the lowest rung possible to save yourself the trouble.

It’s hard to be found when no one’s looking. These discrepancies won’t just fix themselves and it will take some going out of the way and looking a little harder, but the people are there. There are talented women and minorities out there. And dare I say, there are talented women of color! If you really wanted to show off, you’d grab a couple of those and sit them out front where everyone can see. This isn’t to say that no shows staff women and minorities in representative numbers. Southland, Castle, Army Wives, Criminal Minds, Grey’s Anatomy, and Scandal are all examples of shows that staff women and minorities far above the industry average and have had successful runs on television. But the facts remains that ten percent of TV shows had no women on staff and 28.9% had no minority writers. Support shows that are doing things right and support writers that are doing their thing elsewhere. Y’all won’t shut up when your OTP is headed for the shitter. You should speak up about wanting diverse writers staffed on your favorite television shows.