Have you ever seen something and realized that your entire life up til then had been leading up to it? That was the feeling that enveloped my heart when I first watched the new, highly educational and gorgeously stylish music video by Dorian Electra, which co-stars our very own resident writer, superstar, bright shining sun and witch goddess of my heart, Cecelia Kyoko. In this video, which premiered on Refinery29, Dorian Electra goes through the entire history of high heels all while showing off some great dance moves and a billion great outfits.

One special highlight for me personally is Debbie, the ’80s businesswoman played by Cecelia. I love Cecelia with all my heart, but dang, I have a crush on Debbie like I’ve never had on Cecelia and never will. I don’t know, guys, hearts are weird. 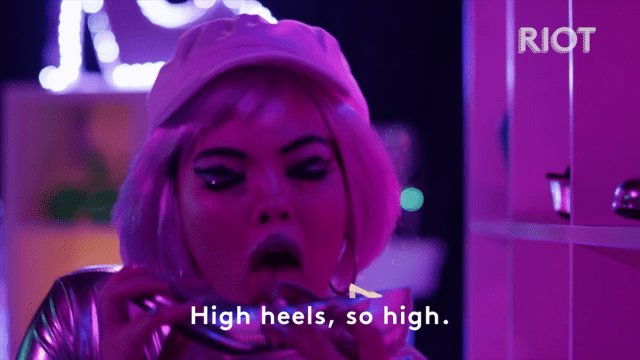 Obviously I can’t talk about this video and not talk about shoes and the song. I’m genuinely impressed at how skillfully Dorian Electra was able to craft this cute and fun song while also putting in so much information about the history of high heels. The video starts explaining that they were invented to be worn by men, starting with the Persian cavalry, then going to French aristocracy, before moving to women, including the extremely fashionable Marie Antoinette. She even talks about how they became unfasionable for a while, but were brought back into fashion largely through pornography. However, this video isn’t anti-heel, it just wants people who wear them to choose to wear them and do it because they like to.

I can’t wait to dance to this song with the video’s star and a bunch of amazing queers at Midwest A-Camp in just a few short weeks.