Ah, elementary school. Fingerpaints, class pets, pudding cups. Enough Nicoles that you had to move to last initials. Very political cafeteria seating decisions. Fighting with your boyfriend because you kept putting your arm around him. Getting boilingly angry when student council election results fell along gender lines. Kissing your fellow softball second-basewoman in the batting shed on a triple dare and then feeling oddly good about it. Uh. Anyone? . . . anyone? 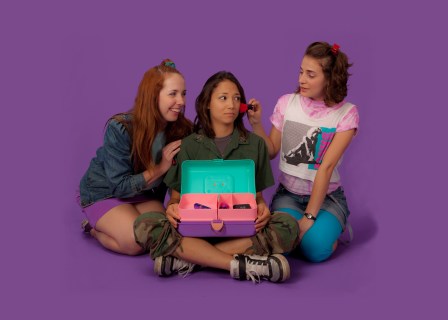 If this sounds familiar, and you live in the Los Angeles area, get thee to the Carrie Hamilton Theatre at the Pasadena Playhouse this weekend, December 8th and/or 9th, for Gina Young’s hilarious and moving Tales of a Fourth Grade Lesbo. There you will find, finally, a theatrical representation of 90s childhood that doesn’t shy away from the hard questions, the many subtle types of bullying, the frequent dance routines, or the weird Barbie sex. You’ll find a diverse cast of twelve women who “had a blast buying sneakers together” and are great at playing kids savvy enough to make some keen observations about fourth grade culture but cute and realistic enough to still embody it. And you’ll find a poignant argument against limiting self-expression for people of any age. (Honestly, if none of that rings a bell, go anyway – you’ll laugh regardless, and you’ll learn a lot.) 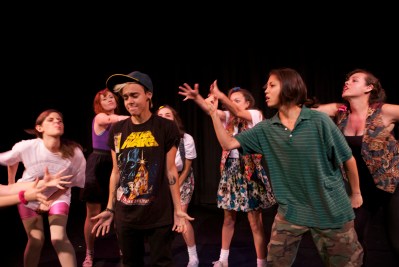 Writer/director Gina Young remembers the queer elementary school experience as “a complex navigation of land mines” – sleepovers, for example, and labels, and nosy little sisters. In a series of overlapping stories, Young’s characters weave through the resulting explosions, with varying results. Help comes in the form of repurposed pop culture touchstones (queer Grease!!), the wisdom of hindsight, and the power of imagination. When one character says to another, after a definite Thing, “We can’t actually talk about this. It’s not a thing. There isn’t even a language for it?” it’s heartbreaking, but since this is a play and not actually my life, instead of brooding in the backseat of a red Minivan for six hours, the stage directions call for the scene to “gradually escalate into a full-on, over the top S/M parody with spanking.” It’s theatrical catharsis at its finest. 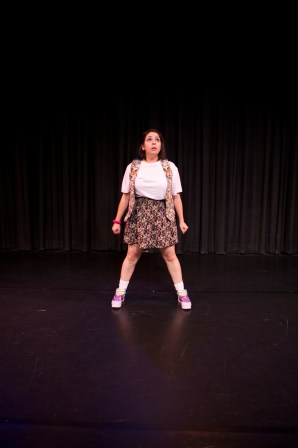 Tales of a Fourth Grade Lesbo was born in the bejeweled adolescent brains of Young and her co-writer Amanda-Faye Jimenez – there’s “a kernel of our actual experiences” in each of the show’s vignettes, says Young – and grew along with them until it finally reached the stage this June, in a sold-out run at the Highways Performance Space in Santa Monica. After that, it planned to rollerskate directly to the Pasadena Playhouse for some summertime shows, but hit a rough patch when a higher-up there was uncomfortable with the title. Luckily, the local queer and arts communities threw their collective weight behind an e-mail writing campaign, and the show is going on.  Young says she’s “thrilled we were able to come to an agreement that allows us to present the show in Pasadena,” and promises that the show will be “all the better” for the delay. 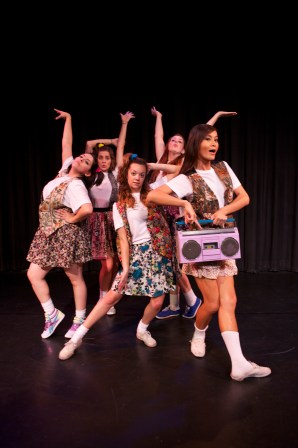 The Bedroom Girls. If you look closely, you can see their imaginary Skip-Its. {Photo by Erica Rae Brown}

You lucky Californians can buy tickets here.  If you can’t make it, and you’re as sad as I am about that, never fear – a DVD release is in the works. Find out more by hitting up mastermind Gina Young at www.ginayoung.com; gina@ginayoung.com, or on Twitter @ohginayoung. And Californians, pull a couple of ponytails for me.