In the summer of 1990, HIV activist and sex work organizer Iris De La Cruz entered into the hospital rooms of people living with HIV, often in the middle of the night, and decorated their IV poles with pink ribbons and balloons so that, in her words, “everyone woke up to party IVs.” De La Cruz explained her reasons: “I had a good time getting this disease and I’m going to have a good time dealing with it.”

Marty Fink’s book, Forget Burial: HIV Kinship, Disability, and Queer/Trans Narratives of Care, opens with this story and only gets more fun.

In Forget Burial, Fink shows how caregiving is activism, disability is sexy and dusty archives are tantalizing. Forget Burial is a superbly researched book of nonfiction that looks at literature (novels, short stories, poetry, autobiographies, nonfiction) and archival objects (posters, zines, videos, art, newsletters) to tell erased histories of disability as defined not merely through pain or loss but through hot queer and trans longings and connections. The book is organized into five chapters, each focused on submerged stories of queer and trans disability and kinship that build a narrative of caregiving as pleasure and as an anticapitalist endeavor. While the language is academic at times, as a reader I found the stories and Fink’s way of conveying them to be always enticing and often transformative. (Fink introduced me to Mikiki’s self-made glory hole performance as a way to feel through consent. Loree Erickson’s pornography helped me think about the desire “to be recognized as a good friend, but also as a good fuck.” Bryn Kelly’s writing had me contemplating all kinds of ecstasy: sexual, pharmaceutical and the list goes on.) 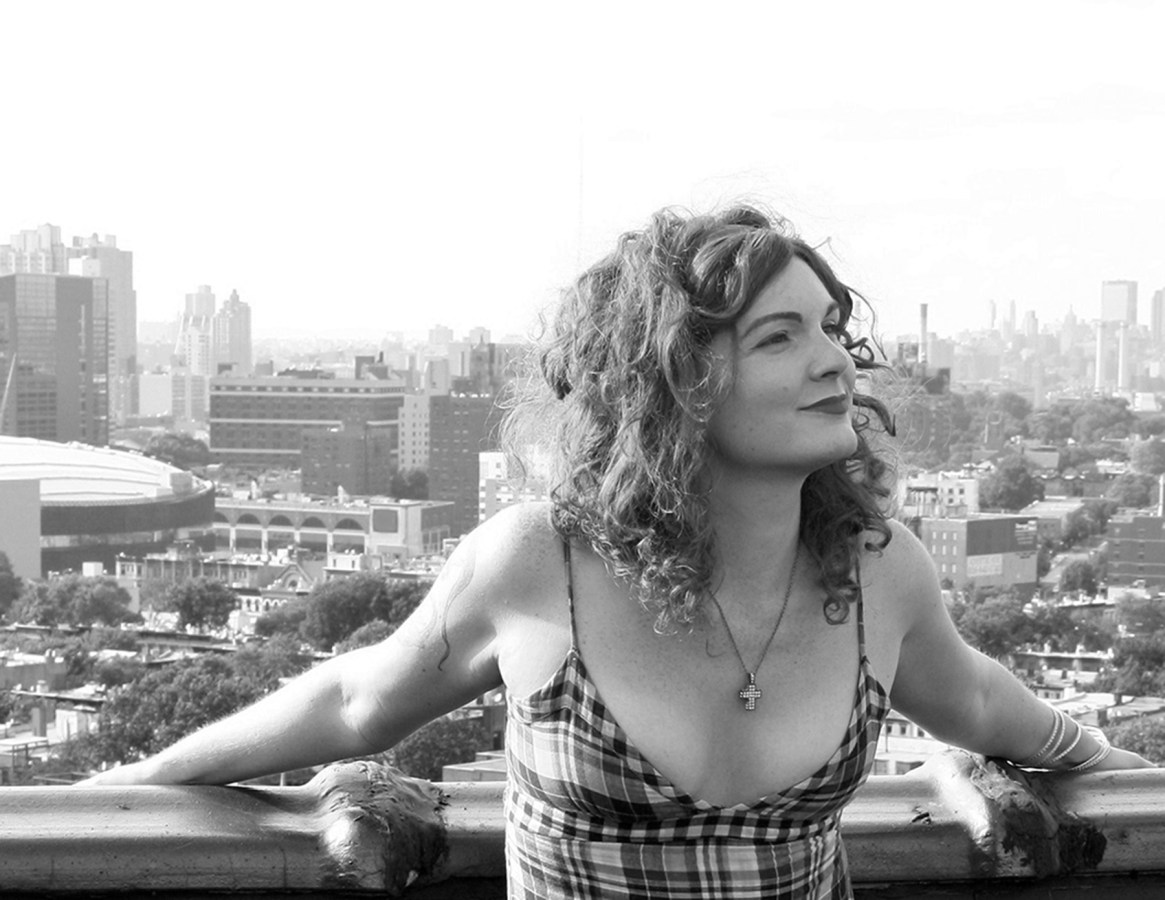 In the book, Fink writes about how many people don’t have access to these early HIV narratives — and not knowing these stories cuts off a part of history that offers pathways forward. So the book sets out to “create an opportunity for a generation that lost lovers, friends and family to AIDS to pass down their experiences to those who are continually looking to this older generation to make sense of our own bodies and our relationship to sexuality, to gender and to HIV.” Throughout these stories of kinship and disability, Fink emphasizes that Black trans communities have been modeling mutual aid for many generations, and even centuries.

The book reimagines Octavia Butler’s vampires in Fledgling as living with HIV to “link the invention of safer sex by queers in the late 1980s and early 1990s to queer and trans caregiving in the present” — and so recasts HIV, shared through blood swapped by mutually orgasmic vampire bites, as the prompt for communities of care.

Fink looks at the glamour and beauty of disability — as in Kia LaBeija’s self-portrait on the cover of the book — and at how disability is all too often desexualized. The book quotes LaBeija as she talks about her self-portrait project: “I wanted to express that women and girls who live with the virus are beautiful beyond belief and that no matter what society says, we are sexy and we deserve love.”

Fink examines how family, both chosen and biological, can hurt but also be a place for self-determination and mutual care. Family can offer a place to support the pleasures of disability kinships. In Sarah Schulman’s Rat Bohemia, a young queer boy is told to leave the family car when he disagrees with his father, only to decide to continue walking away from the car, forcing his family to retrace their path to come get him. In Casey Plett’s A Safe Girl to Love, Sandy, a trans mother, tells Zoe, her trans daughter, that safer sex “gives you freedom, you can’t imagine, the happiness.”

Rebecca Brown’s The Gifts of the Body and “A Good Man” receive Fink’s attention to show how queer families were built in response to HIV and to offer “models of queer family that do not rely on normativity, conformity, sex-negativity or the state.” Jamaica Kincaid’s My Brother and prison activism of AIDS Counseling and Education (ACE) show how care in prisons happens in everyday spaces: in a shower or while cooking a meal. Forget Burial also shows how care can fail — and how that failure is often rooted in colonization and antiblack racism — while also offering opportunities for transformation through mutual aid and disability kinship. 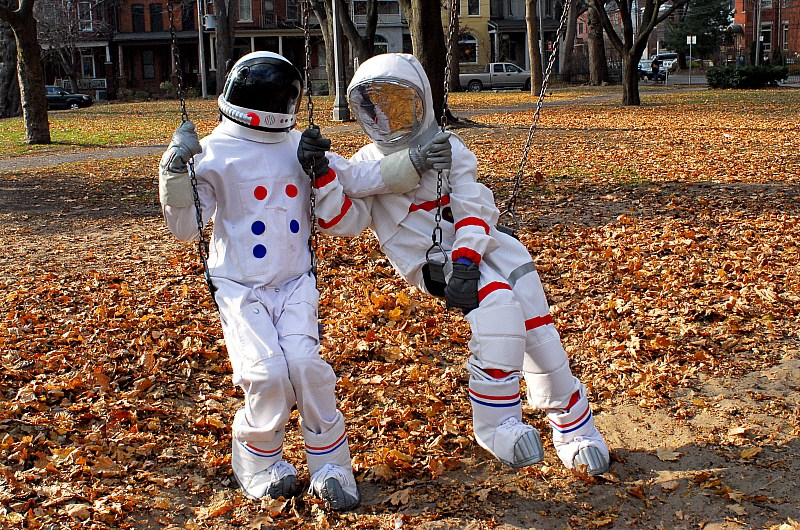 I read the stories from archives and literature attentively, the words becoming the voices of activists from older generations, who fought stigma and erasure, have insight into possible pitfalls and have developed, over the years, strategies for how to build communities of care. Forget Burial taught me about HIV narratives as stories of the pleasure that forms through connection. And how to continue to access stories that are living and vivid, illuminating and essential, beneath the surface.

Fink shows how HIV activists developed models of kinship and care that were anticonformist, gender fluid, anticapitalist, antiracist and sex positive. In a conversation with Fink by email, I asked them about the importance of learning now, during COVID-19, from the ways past generations formed HIV narratives and engaged in disability kinships. Fink responded: “in the 1980s, queer people invented safer sex as an act of care, so those who still needed to connect could do so creatively and safely. [They showed] that there were ways of connecting so that people could take care of each other, so they could still support one another’s body self-determination, gender expression and sexual liberation.” The histories and stories told in this book are not new, as the archives show. What is new, and what is essential in this moment, is Fink’s ability to pull together the legacy of HIV activists and HIV narratives of care to put forward caregiving “as a framework through which to critique capitalism itself for failing to provide care in a nonexploitative way.” Fink depicts these acts of anticapitalism in the book as 1990s moments like hospital protests in the form of high drag fashion shows, in seropositive Passover seders, in trans sex ed skillshare dinners, in order to equate caregiving with activism and also with fun.

This understanding is particularly relevant today, as the COVID pandemic reveals “the vast inequities built into capitalist society,” as Kai Cheng Thom writes. Fink explained that to respond effectively to COVID, “we can draw from and continue the work of the HIV heroes of the past. If we let these histories haunt us, they can help us to defund police and end prisons — really crucial solutions for all so-called ‘new’ diseases. Disability, in response to all pandemics, becomes our motivation to create mutual aid. And I think HIV kinships teach us how to push for real queer and trans liberation that extends beyond assimilation and into anticapitalist, antiracist futures.” (Being haunted by histories of HIV heroes!? Bring it on!) 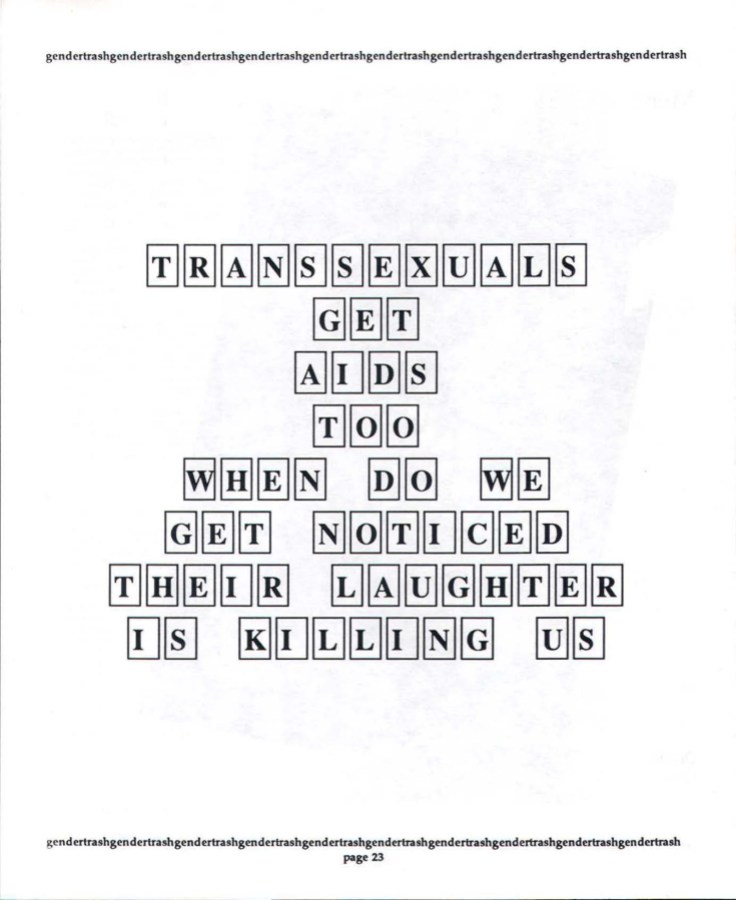 Art by Xanthra Phillippa Mackay from the debut issue of Gender Trash from Hell (1993). Courtesy of the ArQuives

The theme of pleasure that runs throughout the book comes across in Fink’s plans to move the project beyond its current academic format. This was one limitation of the book. Fink is bringing these stories back into our everyday conversations and these models back into current approaches to caregiving. Unfortunately, the academic tone of the text creates distance between the author and the reader and there were places that I found hard to unpack and I was worried that broader audiences of readers who need to see this and be affirmed by it may not have access to it.

Fink shares this concern and hopes the project will break through this limitation. They explained by email: “I’ve always written little DIY self-published zines, and I play in punk bands and I love when art and lit is accessible to everyone and easy to get into. … My hope with this project is that I can make it more inclusive by using this book as a starting point. I would love to someday get to go on tour, hopefully bringing along my trans band too. I feel so eager to learn about all the work people are doing from place to place in response to disability, and to connect these HIV histories to the work we are doing in response to COVID right now.”

Fink has shown us how to have a good time connecting contemporary queer and trans activism and kinship to the past, by bringing forward stories and ways of being as guideposts to frame disability and community within an anticapitalist analysis in a book that is an essential, highly pleasurable, read.

Anna Lee-Popham is a writer and editor. She has been schooled by social movement elders and organizers in the US South and Canada, often writes before the sun rises, and lives with her partner and child in Toronto. Follow Anna on on Twitter.

Anna has written 1 article for us.