When was the first time you found queer community?

For me, it was 15 years ago, when I found Riese’s blog. It was a day of three small miracles.

First, my co-worker gifted me her space heater on her last day, providing me with immediate respite from our frigid ice block of a warehouse in rural north Georgia. Second, my new co-worker, a woman with one of those Christmas-tree-ornament tinkly laughs, asked our boss for a coffee maker. He’d forbidden kitchen appliances in the office, but he eagerly relented for her. Third, while at work, I followed a link from a Gossip Girl recap to a TV fan forum. And I stumbled onto Riese’s blog.

Thus began my new routine of showing up to work an hour before anyone else, every day. I’d flip on my space heater, make a cup of black coffee to thaw myself out after a heater-less commute (I was way too poor to fix my little pickup truck), open up an incognito Internet Explorer window, and settle in with Riese’s L Word recaps. It was the first bit of hope I’d ever felt as a lesbian, a fizzing in my chest that was warmer than any second-hand space heater. If you’ve ever felt that warm hope from knowing there were other people out there like you, then you know why I’m writing to ask you to support Autostraddle today.

Riese was openly gay. She had friends who were openly gay. And they got together in the same living room to watch a queer soap opera and talk about it! Openly!!! I was never going to tell anyone I was a lesbian. (Never, I tell you!) Still, I kept reading Riese’s posts about the show and about her friends’ shenanigans. There was a comfort there. Just… knowing that my fellow gays were out there somewhere, even if, once again, I myself had no intentions of telling anyone I was one of them.

Riese’s personal blog eventually morphed into the Autostraddle of today, which launched in 2009. For over a decade, Autostraddle has found creative ways to survive financially against myriad odds. We already face issues getting advertising deals because homophobia and misogyny are, as you know, very real. But on top of that, because of the COVID-19 pandemic, advertising and event revenue is way down. Ad sales in 2020 were down 86% from what we sold in 2019. We can’t host premiere parties or in-person events. We can’t sell ad packages for TV shows that didn’t get made or vacations nobody is taking! Autostraddle made it through 2020 — without the layoffs or pay cuts other publications doled out in droves — ONLY because when our ad revenue dried up, you stepped up. We wouldn’t have survived without the financial support of our readers, and we will only make it through the next 7 months if, once again, you choose to make sure our community survives. We have enough money to make it to the end of February. But February 28th is NOT far away! Most gifts to us in 2020 were $25 or less, but we had so many people pitch in, that we still met our goal. Every person makes a difference. Will you help us out?

My boss busted me reading Riese’s blog and watching The L Word.

What gave me away? The power bill.

It had shot up between 6:45am and 7:45am over the course of several months, thanks to my space heater. He threatened to fire me, even though I wasn’t breaking any rules. He threatened to out me to my dad, who he knew through small town connections. I never really knew what he wanted. But that same day, he tried to kiss me.

If it had been six months earlier, I would have cried and begged him to let me keep my job. I would have worked extra hours for free, made lunch for the whole office, cleaned the bathroom!

“I’m going to become a writer,” I proclaimed, as I packed up the things in my accounting office where I’d never written a word for money in my entire life. “I know a very successful writer in New York City!” Okay — I didn’t. But also I kind of did? Riese didn’t know me, but I knew her. And I knew I shouldn’t be taking any shit from any men by then.

I pulled over on the side of the road in my dilapidated truck on the way home from quitting my job and jotted down my next steps: 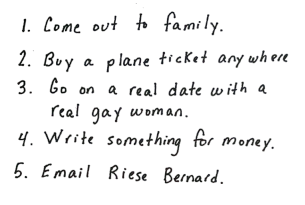 It took a few years, but I did all those things. I read the advice of Riese and her friends and learned how to ask out girls who said “yes.” I told my family I was gay and they said “we know” and “do you want some pancakes?” Then, Riese founded Autostraddle. I started writing blog posts for a different gay website for $17 apiece . We became internet buddies. One day, out of the blue clear sky, another lesbian from New York City replied to a tweet about something I wrote and said if I was ever in town she’d like to take me out for a drink. She, Stacy, liked my writing so much — my gay writing! — she wanted to buy me a beer about it!

We know you believe in providing a space where queer writers and creators can find their voices and grow in their work. Your gift supports this mission, and the dozens of queers writing and working at Autostraddle. Every gift buys us more time. Will you help us out?

Autostraddle has changed so much over the last 12 years. We’ve lived multiple lifetimes inside this decade. Still, we hear from closeted queers and baby gays of all ages all over the world whose only link to queerness is Autostraddle. It’s equally common for us to hear from gays who are out and proud and who all need Autostraddle for different things. From TV and film fans, to astrology mavens, to literary sapphics, to gay geeks and folks navigating the waters of queer dating and having the sex we want to have, to artists and writers and entrepreneurs wanting coverage of their work to those of us who just want to know if straight people are okay (they are not!) — Autostraddle is so many things to each of us, to you, to me.

We think that in 2021, Autostraddle will be more needed than ever. There were many, many, many times in 2020 when all we had was each other, on the other side of the screen, and that’s not coming to an end soon. I understand that feeling, needing that connection, in my bones.

These days, I don’t have a commute. I get up and make coffee for me and my wife. I sit down at my desk in my home office — already kept at a comfortable temperature — and pull up Autostraddle dot com, where I’ve been an editor for six years. I live in New York City now. I met, dated, fell in love with, and married that lesbian who asked me out for a beer over Twitter. We have four cats and the same haircut. Some days I’m writing reviews of one of the zillion TV shows or movies with LGBTQ+ characters that now exist. Some days I’m editing other writers who are reviewing those series and films. Maybe I’m writing advice to rural queers or people coming out later in life or penning personal essays about love or religion or chronic illness.

I’ve written over 1,000 pieces for Autostraddle. Every time I hit “publish,” a thrill of gratitude still runs through me. I will, in some ways, always be sitting in that frigid cubicle in front of that space heater. I’ll never forget that first glimpse into what life could be.

There really is no other place like Autostraddle. And after everything we’ve been through over the past year, we’re desperately afraid of what it would mean if our bastion of internet queerness went under. That’s why we wrote you a letter. Because after a year that saw lesbian bars vanish, publications turn into dust, and our community felt farther away than ever, we’re facing the fact that Autostraddle is not a luxury, it’s needed. I’m afraid that losing this space is dangerous.

Thank you, in advance, for anything you can do to help. We need you. Every person, every member, makes a difference. Help us out?

With love and a firm belief in queer miracles,

P.S. If Autostraddle is going to make it any further in this world, we’re going to make it because of you — and only you. Times are dire. We’re asking you to believe in us because of how we’ve touched each other’s lives, and how we’ve touched the lives of countless queer and trans people we may never even meet in person. The world is better for LGBTQ+ people with Autostraddle in it, and you can make sure that remains a reality. We have enough money to make it through the end of February, and we’re working to raise funds to fill the gaps in our funding through July. Every gift buys us more time. Will you give to our fundraiser or become an A+ member?