Not knowing they’re being followed, Maeve and Nia try to use the tapestry map to find the totem, but they’re surrounded by too many dream spires. They know the necklace can guide them but they need a better view, so Nia uses dream energy to fly them up. 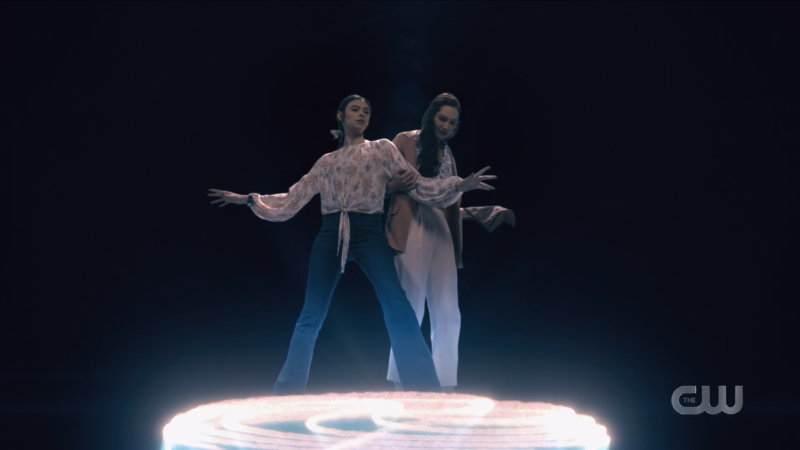 This scene had the same energy as nine-year-old me pretending I was a witch using my powers to open the automatic doors at the grocery store.

They see the golden spire they need and clasp hands in excitement before remembering they’re in a fight and quickly letting go.

When Supergirl returns from stopping a mob from hurting themselves trying to get through the dome, Alex says she’s going to try to hold the governor off a little longer but for now they’re in a holding pattern, so Kara is free to take a call from Andrea yelling at her for missing a meeting she set up for her in preparation for the big interview…that was Kara’s idea in the first place. Andrea finally speaks the unspoken things: Kara is a bad employee. She’s a good enough writer that Andrea was willing to look the other way; she can excuse the odd hours and random disappearances if her articles show up on time and impeccable. But this? Bailing on meetings with important world leaders? Embarrassing Andrea and making CatCo look bad? This she can’t excuse. 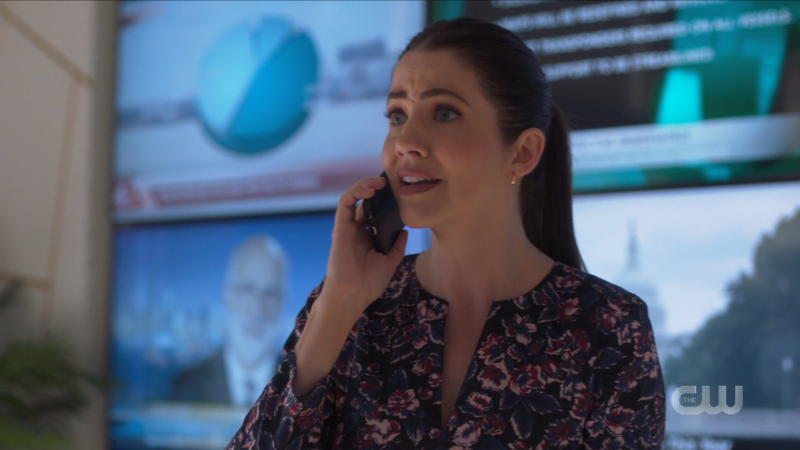 “If you don’t show up at CatCo, how will I get screentime? It’s not like I have a supernatural alter ego or anyth–wait.”

Kara heads back to Alex with her tail between her legs and confides in her sister that she feels so…overwhelmed. Ever since she got back from the Phantom Zone, she’s felt one step behind. One step behind her to-do list at work, one step behind Nyxly. The stakes feel higher than ever and she can barely cope. And she doesn’t say this part, but I have a feeling that with one hand in each of those pots, she’s forgetting to check on the trauma of the Phantom Zone she left in the oven. That metaphor got away from me but you know what I mean. 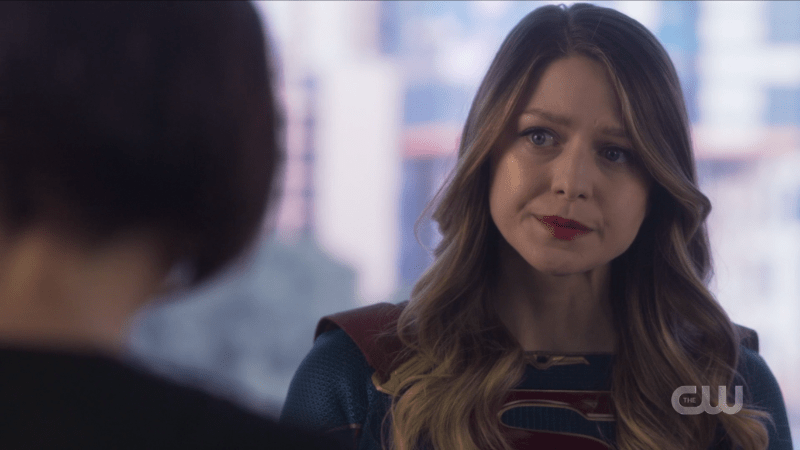 I think Kara needs a nice relaxing trip to the Fingerlakes to recharge.

Alex tries to remind her that yes, she has a lot on her plate, but also she is not Oliver Queen and can and should rely on her team to have hre back. She tells her baby sister to just go be Kara while the Superfriends deal with the nightmare monster, and promises her that together – together – they’ll take down Nyxly. 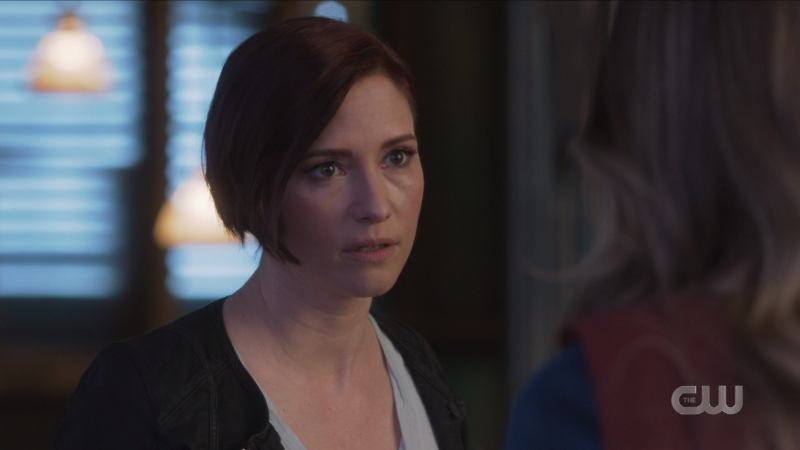 J’onn and Alex check in with the governor and try to buy themselves more time but they only have an hour before she takes things into her own hands and has the air force take down the dome, nightmare monster be damned.

When Nia and Maeve get to the golden spire, Nia says they have to be ready for anything this totem could throw at them, so she suits up as Dreamer. 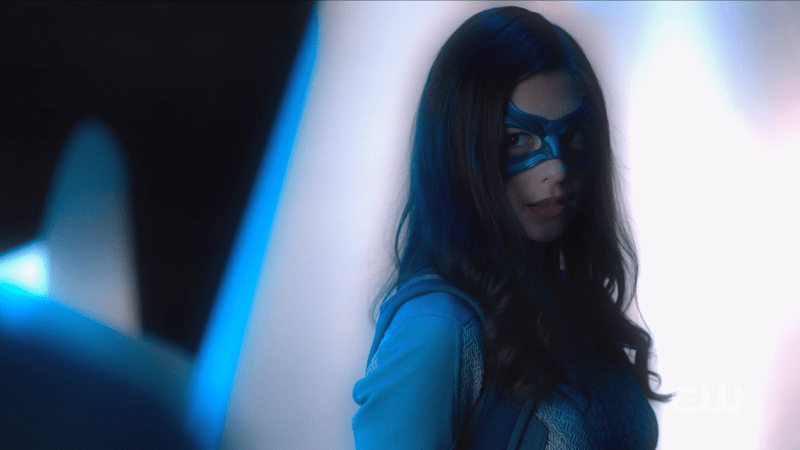 How many times can I make a dream girl reference before this season is through.

But before Nia can lead the way, Maeve rushes forward to try to take it for herself. The Totem Games Color Commentator tells her that she’s not pure of heart and scolds her, so Maeve admits to Nia that she’s still bitter about Nia getting her dream powers. She acts like Nia stole them from her, but that’s simply not how it works. Just because someone has something you want, doesn’t mean a) they don’t deserve it, or b) that you WOULD deserve it if they didn’t have it. It’s a fine line, but while it’s one thing to wish you had something someone else has, it’s petty and childish to wish they didn’t have it. Who knows how these powers work, maybe they knew that Nia would be good at the job and take it seriously and appreciate it as the gift that it is, and that Maeve would let the power get to her head! The powers chose Nia for a reason, and Maeve should respect that instead of throwing an entire tantrum.

And Nia knows this. And she’s done being hurt by her sister. She says she no longer cares if Maeve thinks she deserves the powers or not, or even if she believes Nia is a “real” woman. Nia knows who she is, knows that she is the Dreamer, and that’s all that matters. 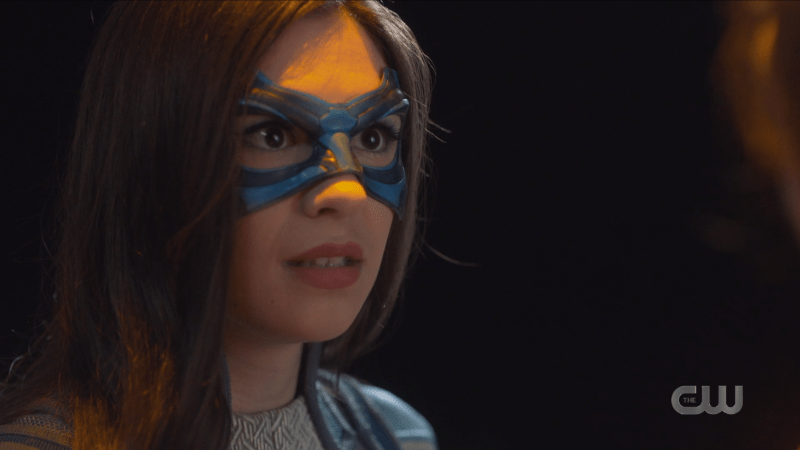 To answer my question in the previous caption: The limit does not exist.

Nyxly interrupts and a fight breaks out, and since Dreamer chooses to protect Maeve over the totem, Nyxly gets her hands on it. Seeing the fight is now uneven, Maeve gives Nia their mother’s necklace to help amplify her powers, giving her enough of a boost to scare Nyxly off and save her own and her sister’s lives.

Back in National City, Kara is getting ready for her interview, and while the world leaders are running a little late, her mind has time to wander to the other things she’s stressed about. 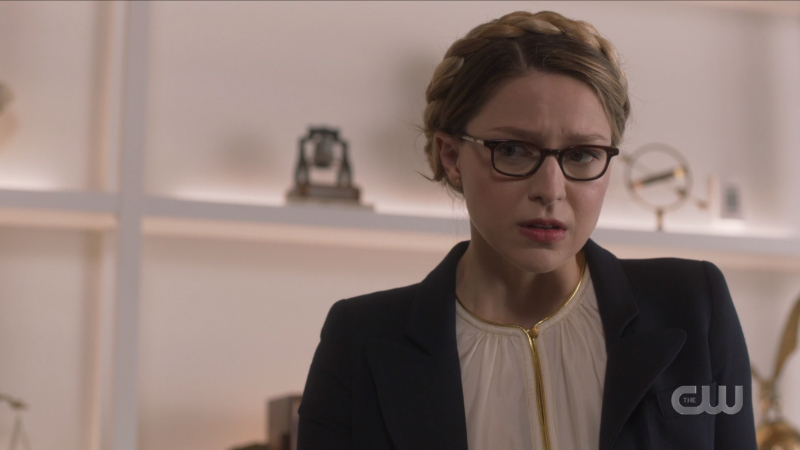 And this is why I have to put on a podcast to walk the five feet from my living room to my bedroom.

When she sees trouble on the news, Alex tries to reassure her that they’re handling it, but Kara is too worried about her friends to just sit and wait so she flies off to fight the nightmare monster. 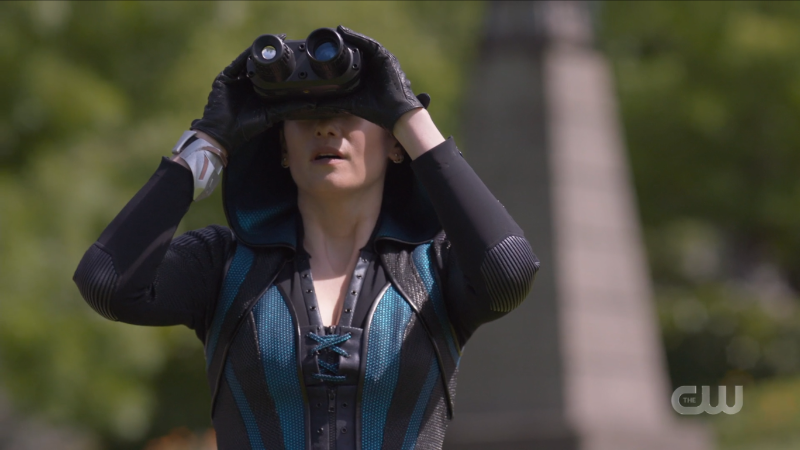 “It’s a bird! It’s a plane! It’s my sister’s too-high expectations for herself!”

The device Lena and Brainy made is working but the air force helicopters threaten to ruin the plan. Supergirl does end up helping a lot and getting the nightmare monster through the realm, and Lena is thrilled. 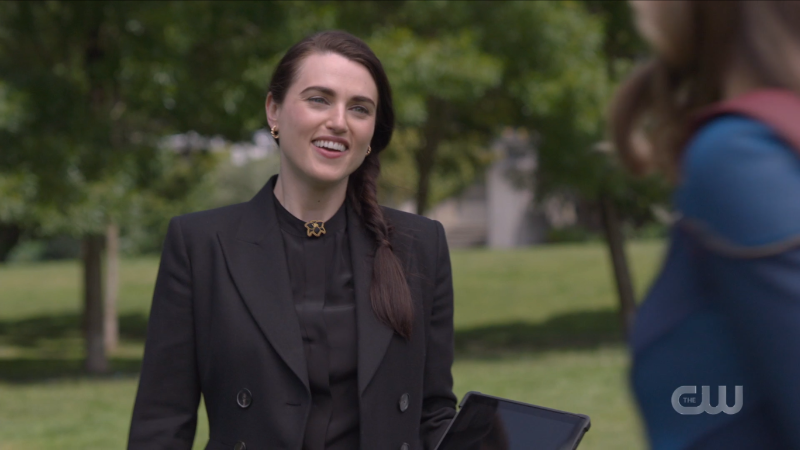 But when Kara gets back to her interview, she’s too late. She missed the window. And just as she realizes she dropped that particular spinning stack of plates, she hears from Brainy that Nyxly has the dream totem and her other plates come crashing down, too. And it’s all just…so much. 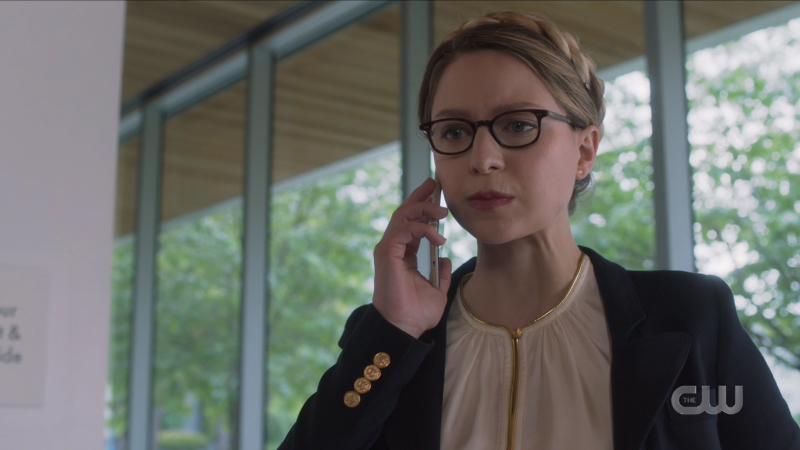 Kara goes out on CatCo’s Feelings Balcony and thinks about how she feels like she’s drowning and it’s getting harder to tread water and she feels like she’s causing a whirlpool with all her flailing and bringing the people closest to her down with her. She can’t afford to have a bad day, not when her ability to do her job is literally life and death.

Kara remembers something Cat Grant once told her. You can have it all, just not all at the same time. So she realizes she has to decide what her priorities are right now, and instead of putting part of herself into many things, put her all behind one.

She goes to Andrea to apologize for missing the interview, but Andrea reassures her that she covered her ass and she’ll have a second chance at the interview. Her last chance. 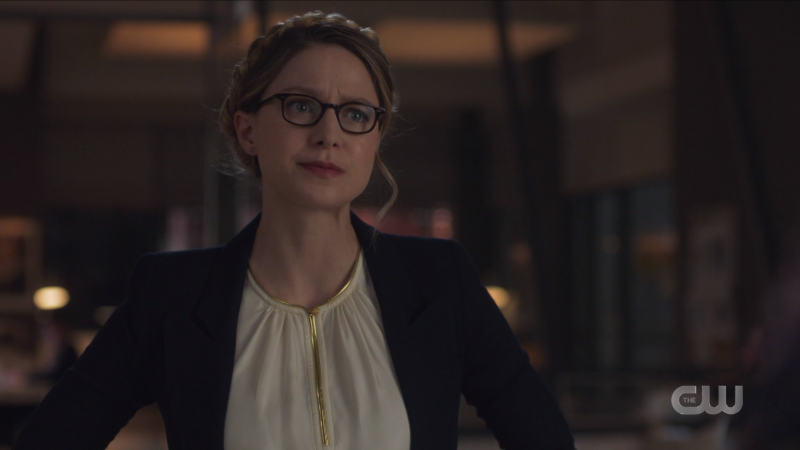 “Frankly I work better in a team setting, especially when I’m the captain.”

And I know a lot of people were upset about this, and I do get it; Kara loved being a journalist, it was a dream of hers for a long time. But the truth is, dreams change. Priorities shift. I wanted to be a teacher for a long time but then I discovered writing. I wanted to be a TV writer once but I prioritized my friends and family Back East over moving to LA. I have plenty of friends who switched careers entirely because their passions, feelings, dreams, and/or goals shifted. I don’t think it’s unreasonable, or uncharacteristic, for Kara to want to put her whole self into being the best Supergirl she can be. CatCo isn’t what it was when she signed up; for better or worse, Andrea has changed the company pretty drastically from what it was when Kara worked under the mentorship of Cat Grant. And neither Lena NOR Kelly works in the building anymore, plus she gets to see them both, and also Nia, at the Tower whenever she wants. So there’s very little keeping her here right now. So it makes perfect sense to me why she quit, and I stand by her decision, even if it’s temporary.

Before Nia and Maeve part ways, Maeve apologizes for being selfish and causing her baby sister so much pain. She admits that she didn’t even mean what she said, it was just the cruelest thing she could think to say. She was hurting and in her selfishness, wanted Nia to hurt, too. She could never deny it before, but she certainly can’t deny it now: Nia is wonderful, and undeniably the Dreamer.

She asks for Nia’s forgiveness, but Nia bravely, boldly, and calmly says, “No.” 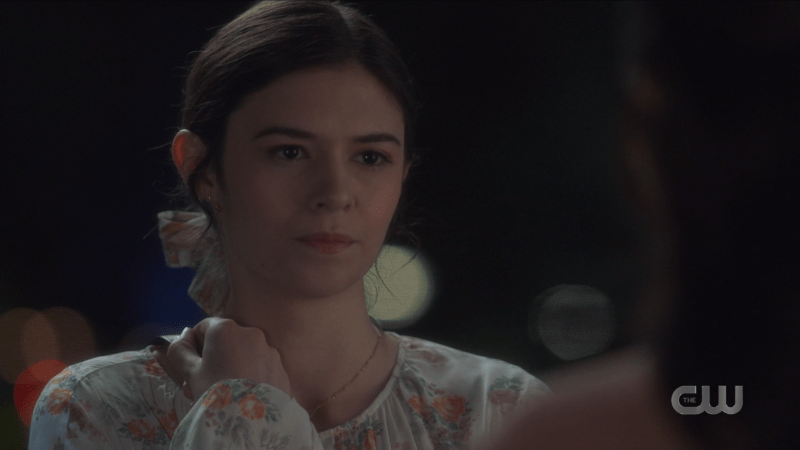 Maeve was Nia’s best friend and she said the vilest thing just to hurt her then ran away to leave Nia to grieve her mother and figure out her new powers all alone. That can’t be forgiven with a simple apology. Nia can’t give her a clean slate, she can’t assuage Maeve’s guilt for her. But she can give Maeve a second chance. A final chance. Which Maeve gratefully accepts.

At the Tower, Lena updates Alex and J’onn on their totem situation, because they used science and Earth Magic to re-conceal the humanity and courage totems. 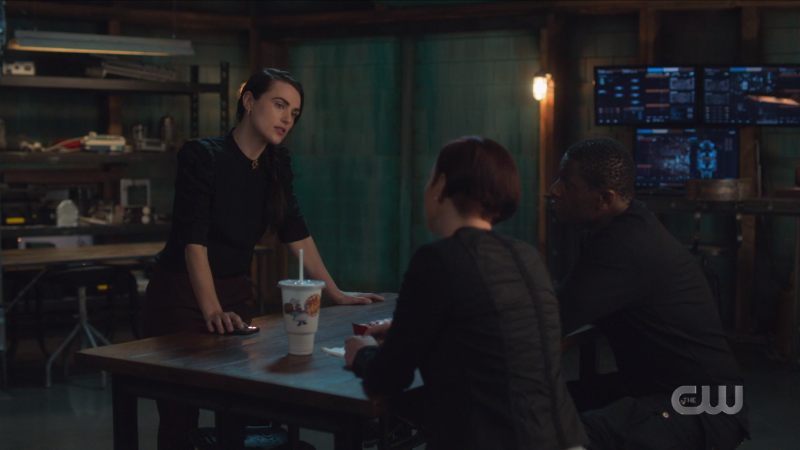 “I can’t believe you ordered Big Belly Burger without me. I’m going to have to have Kara fly to France to get me authentic fries to compensate.”

They talk about how the city is still pissed at them. They then see Supergirl appear on their TV, in an interview with CatCo, apologizing for the dome and promising to do better by them in their quest to stop Nyxly. She says “failure is not an option” which is a lot of pressure to put on herself and her team, but at least she’ll have more time to dedicate to this venture. 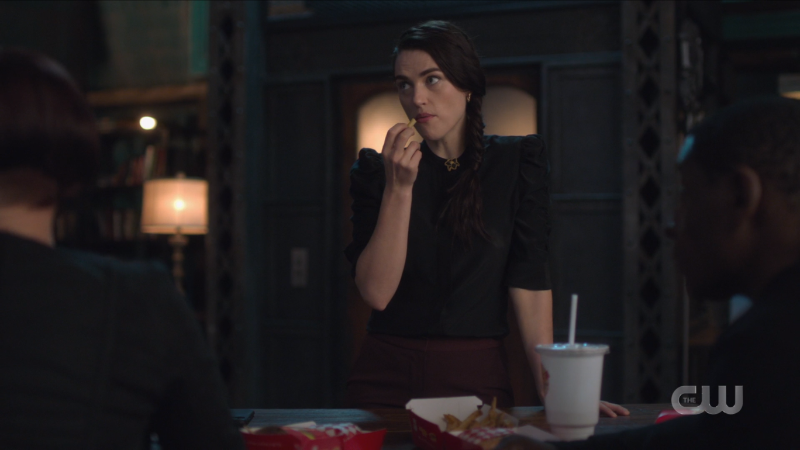 “This fry is delicious but that woman is more my kind of snack.”

Up on the glam rock spaceship, as Nyxly fixes her suit, the AI asks for the dream totem before it dies, and when she does so, what’s left of the suit transforms into a literal nightmare monster: Lex Luthor.

I, for one, am furious that he’s back even though I knew it was coming. We have four episodes left and I don’t want to waste a single minute on this asshat, but at the very least hopefully it leads to some lovely Lena content. We’ll see.

Next week, the quest for the Love Totem results in some cupid-esque shenanigans! See you then! (And don’t forget, our fundraiser is still going, and we could still use all the help we can get! Until our friendly neighborhood Lena Luthor donates billions of dollars to impress her gal pal, we rely on A+ memberships and reader donations to keep doing what we do.)