Happy Wednesday and welcome to this recap of Supergirl season 6 episode 16, “Nightmare in National City,” aka the one where Dreamer levels up.

We open this week with an old school intro, where we’re reminded about Kara’s pod getting knocked off course, and get flashes of Lena doing magic and Guardian guarding while she talks about her friends. It made me a bit nostalgic.

But then we jump right into the previously-ons, where we’re reminded that the Superfriends are in a race against Nyxly for 7 totems; they had 3 of them but yeeted the Hope Totem into the sun in an attempt from keeping Nyxly from ever being able to make the All Stone, but Nyxly received a Lexosuit as a gift from a “secret admirer” to help her. Also, a little longer ago than all that, Nia’s sister Maeve was a bitch to her because Nia became the Dreamer of the family.

When Nia returns to National City with no Dream Totem in hand, she explains to Brainy that the reason she hit a dead end is because she went to her dad to go through her mom’s things for clues but turns out Maeve took it all and ditched their dad for taking Nia’s side and disappeared into the ether. Brainy suggests looking for the answers vis dreams so she does, getting a vision of a name that might lead her to the next clue. 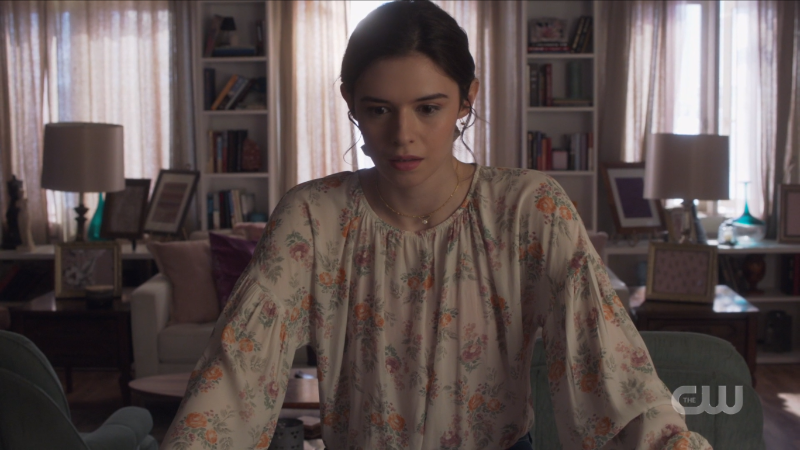 Me trying to remember what the heck I came into this room for.

Up on the glam rock spaceship, Nyxly is fiddling with her new suit when she realizes it comes with an AI…of herself. It’s not only her own voice, but also knows about her 10-year-old self’s secret crush, so she’s confused, but it promises her it knows how to help her find the Dream Totem so she decides to trust it. And honestly giving a narcissist an AI with her own voice is the fastest way to get it to do what it says.

Meanwhile, in the tower, Alex shows up to work with a stack full of drawings from Esme for the Superfriends. 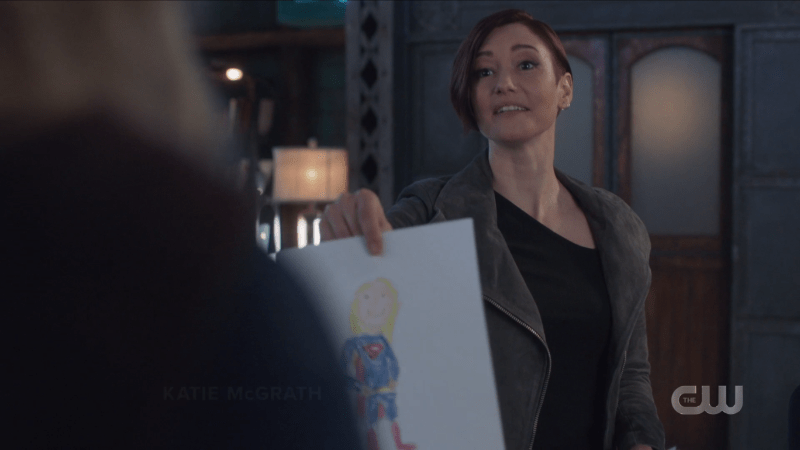 ALEX IS ALREADY SUCH A PROUD MAMA

She’s so proud of the drawings, and everyone is delighted to get them, and it’s all very cute and pure. Alex tells them that Kelly took Esme to meet the Olsen family and she’s going to join them as soon as things calm down a little; aka as soon as they find the Dream Totem.

Kara tells the team that her plans for today involve doing an interview with international leaders to try to promote peace and healthy communication skills, and Lena loves this idea. 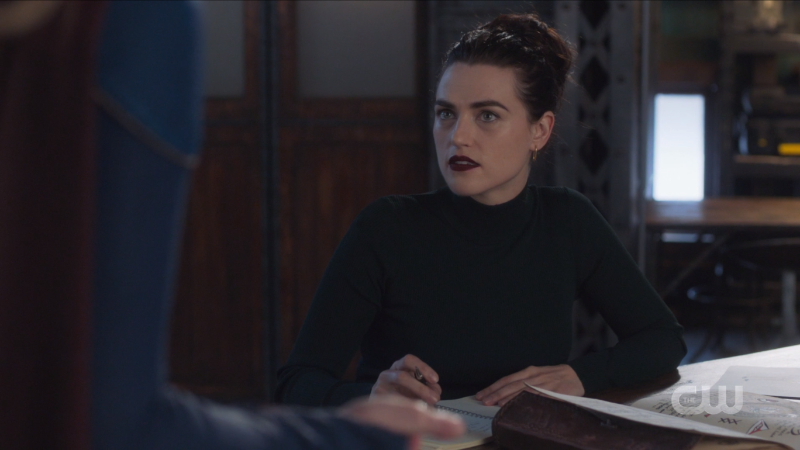 It was so nice of Supergirl to get me an Ashlyn Harris’s Birthday present in the form of this look.

When Kara pitches it to Andrea, and it’s the most passionate we’ve seen Kara about her day job in a long time. Andrea finds it endearing but thinks the topic is boring so she decides to make it a multimedia spectacle, which misses the point of what Kara was trying to do but isn’t a no, so Kara will take it.

Across town, Nia follows her vision all the way to her sister, much to both of their horror. 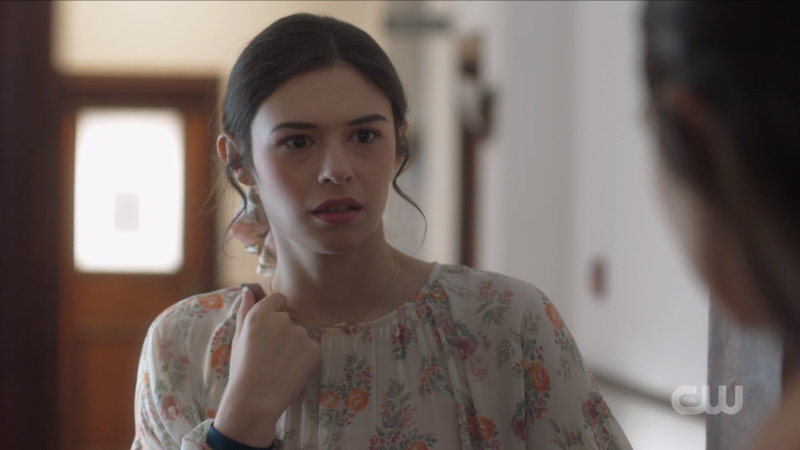 Me when I open the door too soon and the delivery person who just put my food down on my mat hasn’t left yet.

Maeve starts to apologize but Nia interrupts her and says that’s not what she’s there for. She’s just there to talk about the Dream Totem. Maeve wasn’t even sure it was real, the research all mentions an artifact in the dream realm that can give anyone dream powers so of course she was intrigued by it, but never found any proof of it. Nia asks Maeve to tell her everything she knows about the totem but Maeve says it’s not like she can distill all the research she’s ever done on the topic onto a post-it note for her. She opens a closet full of old books displayed rather haphazardly for someone who supposedly cares about this topic, and basically tells Nia good luck.

Meanwhile, Nyxly crashes a sleep lab to use her AI to steal technology from a doctor who learned how to access the dream realm. She uses her new toys to borrow some dream energy and as Supergirl arrives to try to stop her, she opens a dream portal and sends them a nightmare monster for their troubles.

Alex and Lena hold down the Tower and try to guide their flying friends and help them keep the nightmare monster from getting to the power plant. 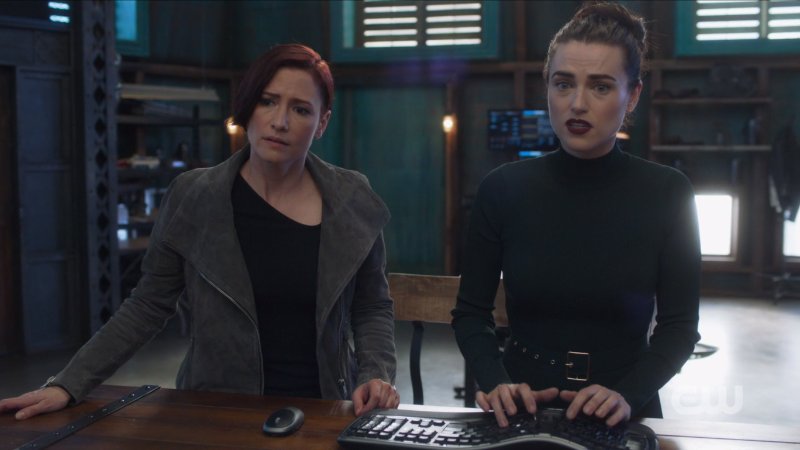 I’ll be honest I 200% didn’t catch what anyone said the first time I watched this scene with Lena and Alex looking this good in one single frame.

Since J’onn’s brain powers and Supergirl’s heat vision aren’t helping, Kara asks Lena if there’s a spell she could do, but it’s more complicated than that…or she doesn’t believe in herself yet. Either way, she decides to rely on the original source of her usefulness to the Superfriends and uses her big beautiful brain to offer the solution of using satellites to create a dome over part of the city; the bad news is, it would trap the monster in with half the people in National City, the good news is it would keep the monster from getting to the power plant. Alex is torn but Supergirl is desperate so she makes the call and tells Lena to do it. And the dome is straight up from a Stephen King novel, splitting food trucks in half and separating people from who they were sharing a taco with mere seconds before. And then, as icing on the stressful cake Supergirl is being served, the monster turns invisible.

Back at Maeve’s office, the Nal sisters work together to look for clues about the Dream Totem. Maeve tells her about a tapestry with a maze on it that might be instructions from the Oracle who hid the totem. and how it has a symbol that was also on the necklace their mother gave her, the symbol for purity. As Maeve picks up another stack of books, news clippings of Dreamer saving the day fall out. Nia is surprised but Maeve tries to shrug it off like this isn’t the sweetest thing; she says they might be fighting but Nia is still her sister. 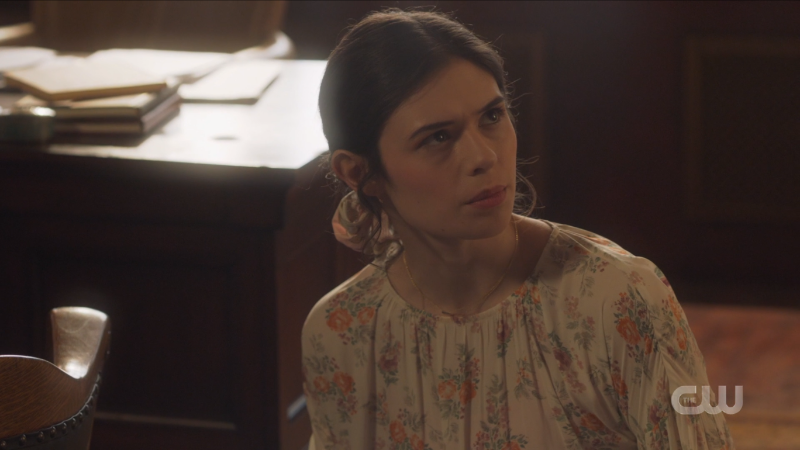 “She saved everything we gave her, every little scrap of paper.”

When Nia realizes there are too many tomes to tote to the dream realm for one person, she decides to take her sister with her. Maeve is delighted by this prospect and smirks as her baby sister brags about her boyfriend as Nia texts him to tell him she’ll be back on this plane of existence in a jiffy.

Back at the Tower, Supergirl reports that she can’t find the monster anywhere. She checks on Lena, who tells her that she found out about the sleep lab and that Nyxly was probably there to steal dream energy, which means she’s already on her way to the Dream Totem. 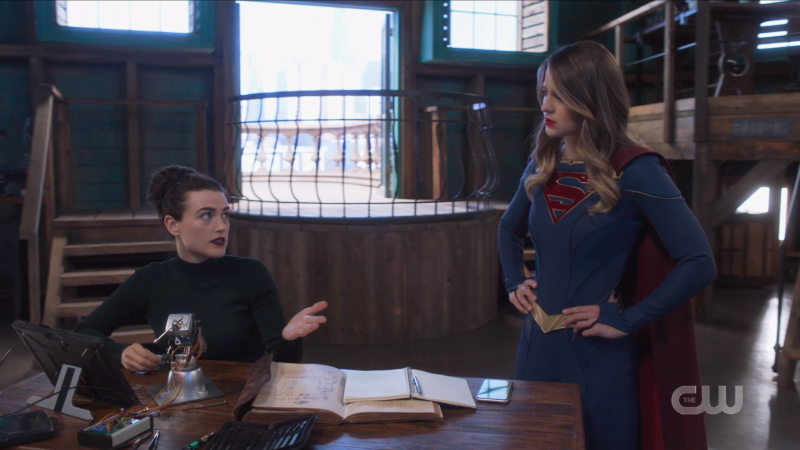 At this point I’d settle for them admitting they’re at LEAST work wives.

But Brainy arrives with good news; they’re not as far behind as they thought. Nia is already on her way to the dream realm to get the totem; they just have to hope she can find it before Nyxly.

While wandering through the dream forest, Maeve tells Nia about a dream expanse somewhere past this forest, but Nia has never figured out how to leave. As they wander, Maeve’s necklace starts to glow and points Nia toward a tree with a knot that is also a button, and when Nia presses it, it opens up a door to the aforementioned dream expanse…a door that closes behind them. 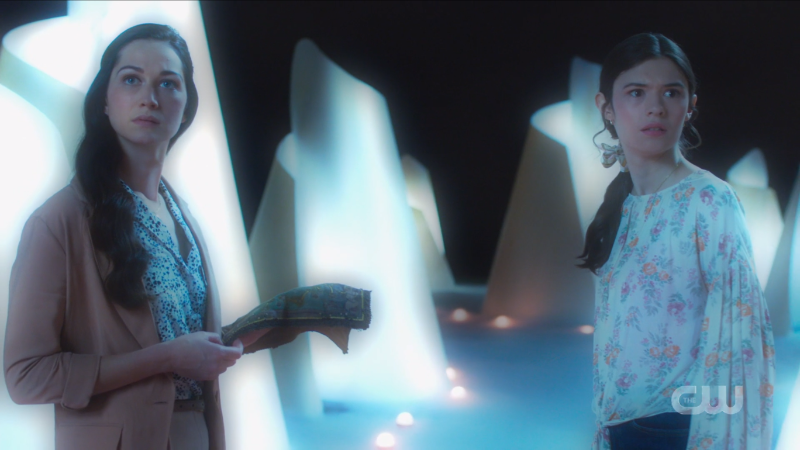 Since the action is happening in the dream realm, Kara runs off to do a mock interview to prepare. 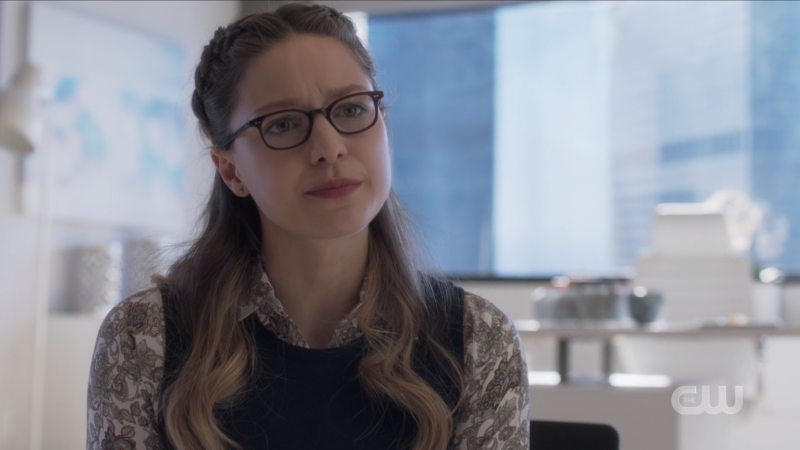 “Alexa, show me the definition of ‘adorkable’ please.”

But she’s distracted. Kara can see on the news that the town doesn’t approve of the Superfriends’ decision to put a dome over half the city, and the governor is speaking out about it. And so even though she’s wearing Kara braids and glasses, her head is in a Super space.

Alex is at the Tower trying to talk the governor down about the dome, trying to convince her that it’s for everyone’s safety, but the governor is still pressed about it, because the people are separated from their jobs or their loved ones. 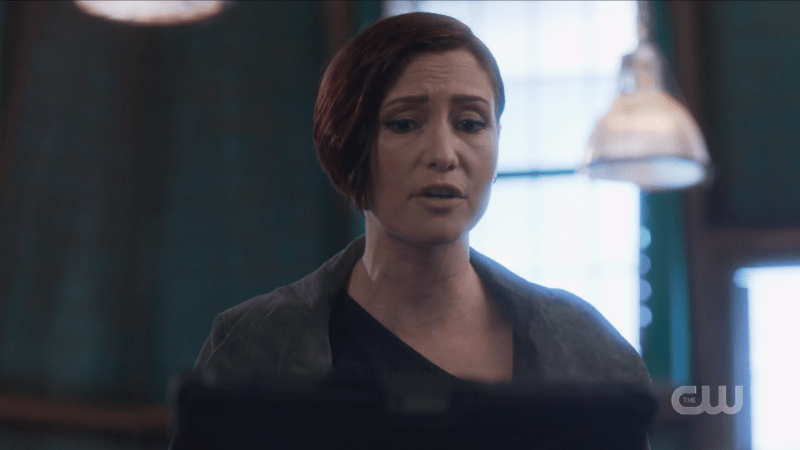 “There’s a global pandemic, people shouldn’t be milling about anyway.”

The governor gives them 12 hours to take the dome down before she takes matters into her own hands. While Lena and Brainy get to work on a machine that they hope will contain the nightmare monster, which would be going better if Brainy wasn’t so in his head about things. 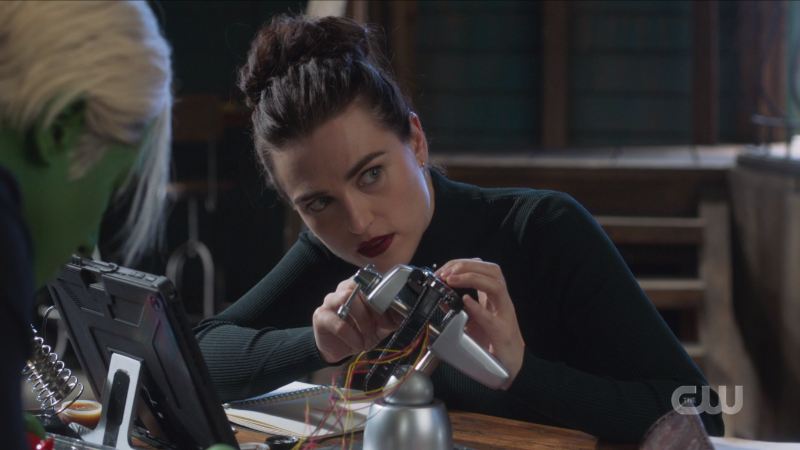 “Brainy, if I could get shit done while Kara was in the Phantom Zone for WEEKS, you can focus for an hour while your girlfriend is in the dream realm WHERE SHE VOLUNARILY GOES ALL THE TIME.”

In the dream expanse, Nyxly wanders around through spires, guided by her AI, until she finds a lighted path. And when she does find it, she sees that Nia and her sister are already on the path, and is delighted by this turn of events.