Hello lovebirds, and welcome to this recap of Supergirl, season 6, episode 17, “I Believe in a Thing Called Love” aka the one that was somehow both the gayest and the straightest episode of all time.

Previously on Supergirl, Nyxly was on a quest for the totems but Supergirl threw the Hope Totem into the sun, Nyxly had a secret admirer who turned out to be Lex Luthor, and Alex and Kelly adopted little Esme.

We open with Nyxly, a little annoyed that her latest totem find spat out a human man, and when Mitch points out that the man is Lex Luthor, Nyxly immediately starts to rage. Supergirl might be her enemy, but she has no love for men who send women to the Phantom Zone. She rightly calls him arrogant and narcissistic, and promises they’ll never be friends. 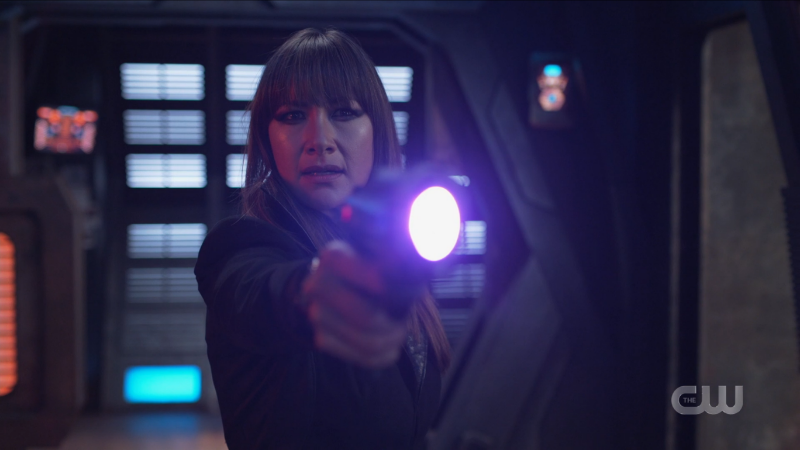 Oh what an episode this would have been if Nyxly had just killed Lex right here!

Back at the Tower, Kara tells her friends that she quit being a reporter for CatCo. And her friends are very concerned. Lena perhaps most of all, knowing how important being Kara Danvers alongside being Supergirl was to her. 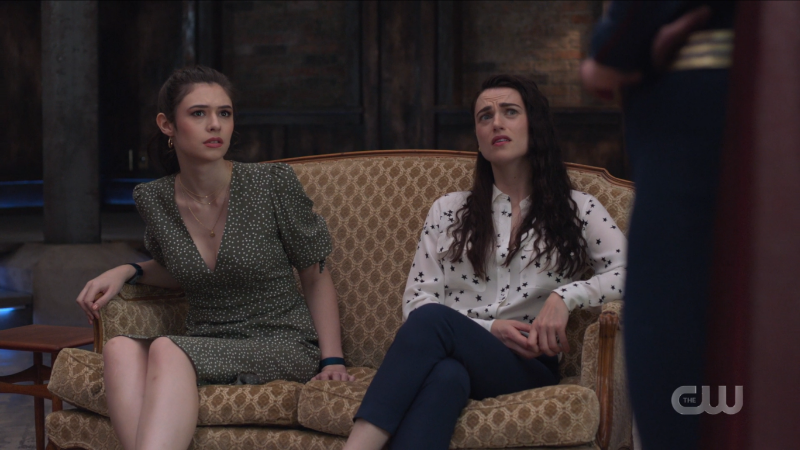 “Wait you were still pretending to be a journalist?” “Yeah I thought you quit weeks ago. We’re using your desk as a snack table.”

But Kara insists this is the right choice, so she can focus on stopping Nyxly. Speaking of, Brainy needs three of his smartest gals to plan, so he pulls Lena, Kelly, and Nia away.

As they leave through one door, Alex enters through another and looks around to make sure Kelly isn’t around. Alex’s smile widens and she pulls out a ring to show an ecstatic Kara and J’onn. She tells them about how she’s going to set up Al’s bar for the proposal and Kara makes her tell the story of why again, because every time Alex excitedly tells Kara about how happy Kelly makes her, the further away those nights of Alex crying on her shoulder about past love lost feel.

And besides that, the story is cute. The moment she realized she was in love with Kelly is when they had the same Die Hard-related answer to a question. 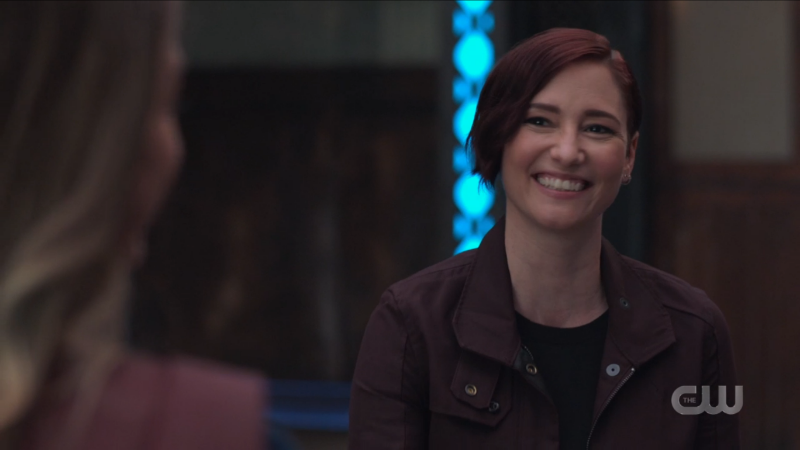 Alex being such a badass at work and such an unbelievable DORK in her personal life will never not delight me.

With her sister and Space Dad’s blessing, she rushes off to set up the bar with Esme, Kara promising to call her when they need her.

But when Alex and Esme get to Al’s, he has to apologize. The gaylien bar was already booked for the night in question. Esme tries to help, making her big eyes look as puppy-dog-like as she can, pleading, “Don’t you believe in love, Al?” 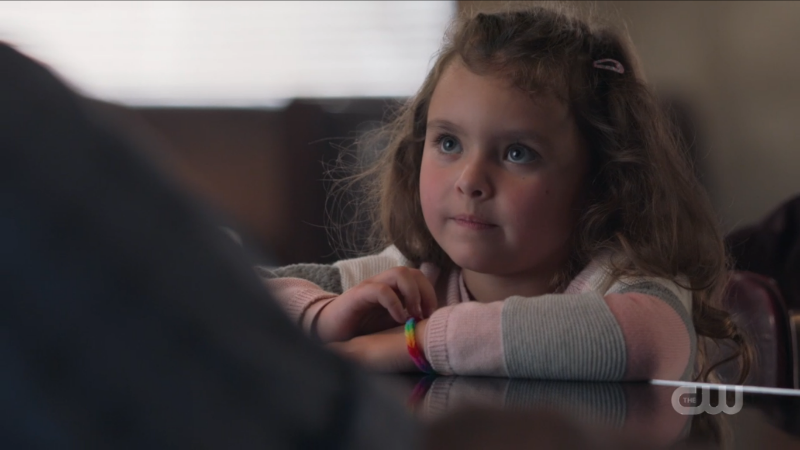 Me: Love is a lie.
Also me: I would do a murder for this fictional child because I love her.

It’s very cute, and I would have built an entirely new bar for her, but Al has to say no.

Lex goes back to his lair and tells Otis that he was hiding out in the future, where he and Nyxly are in love, which sounds fake since sociopathic narcissistic megalomaniacs like Lex aren’t the best in relationships but I guess technically Nyxly is no peach either.

Anyway, back to the important people. The plan is for Lena to make a fake love totem and draw Nyxly out into a trap. 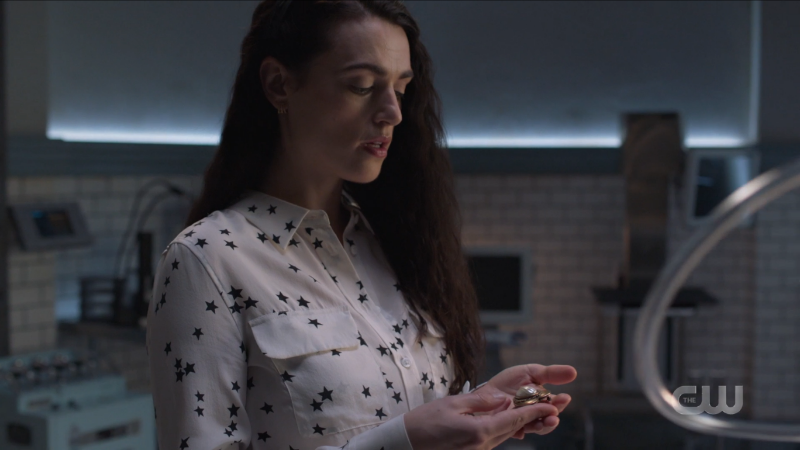 My question is, did Lena have all this business casual wear in one of her closets just waiting for someone to ask her to a cocktail bar someday or did she buy a whole new Tower wardrobe when she joined the SuperFriends?

They decide to set this trap on Lover’s Lane, so clearly the best option for the stakeout is Alex and Kelly. What’s hilarious is they go dressed as Sentinel and Guardian, furthering my headcanon that the city just ships two of their local superheroes and are just waiting for confirmation that they’re dating. 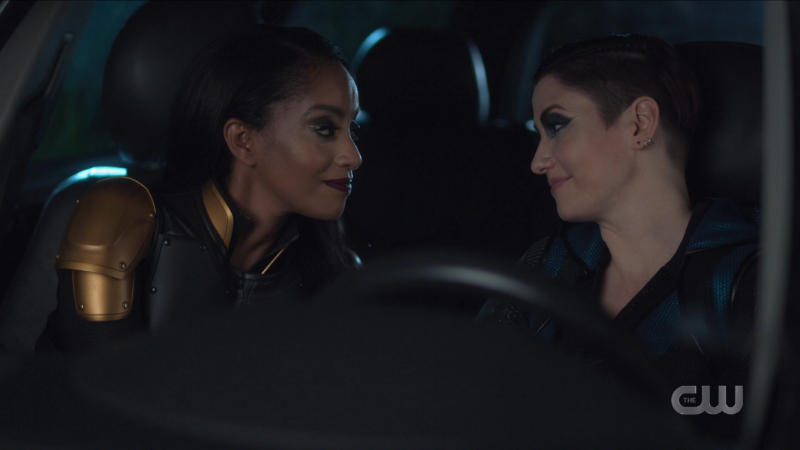 It’s like quietly and casually shipping two mutuals on twitter or the baristas at your local coffee shop.

Alex and Kelly talk about how lucky they are to have each other AND Esme, and Alex looks like she might propose right then and there, but Nyxly shows up to spoil the mood.

Lena does magic from the cover of night while the rest of the SuperFriends fight. They’re just about ready to take Nyxly to confinement when Lex shows up out of nowhere to save her.

Lena is so furious at the sight of her brother that she accidentally burns the fake totem and when her brother spots her in the trees and asks if she missed him, her rage burns brighter. Though honestly maybe it’s also because Lex blasted Kara with Kryptonite. Again. 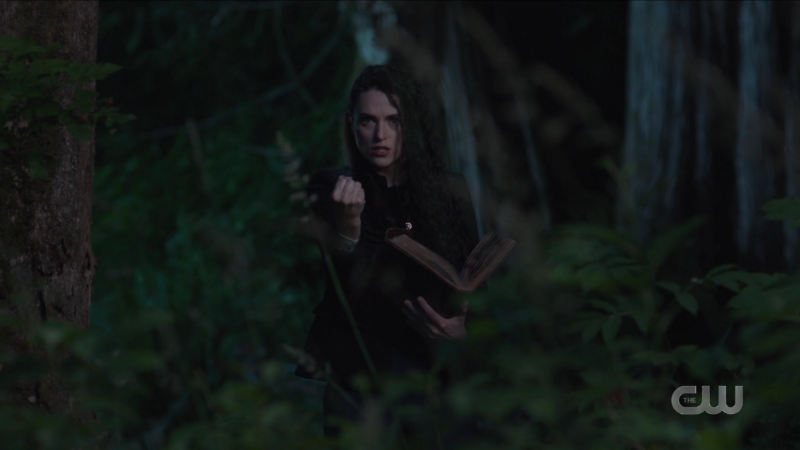 If Lena had flipped Lex off to spark that fire I would have thrown her a damn parade.

Nyxly is pretty pissed too; she didn’t need some MAN to save her. Especially when she finds out the reason he knew to save her was because of a creepy little drone he has following her around.

When Kara wakes up from her yellow sun nap, Lena is nervously standing by her bedside, relieved Kara seems okay, amused when Kara is barely conscious before asking if Lena is okay after seeing her brother. 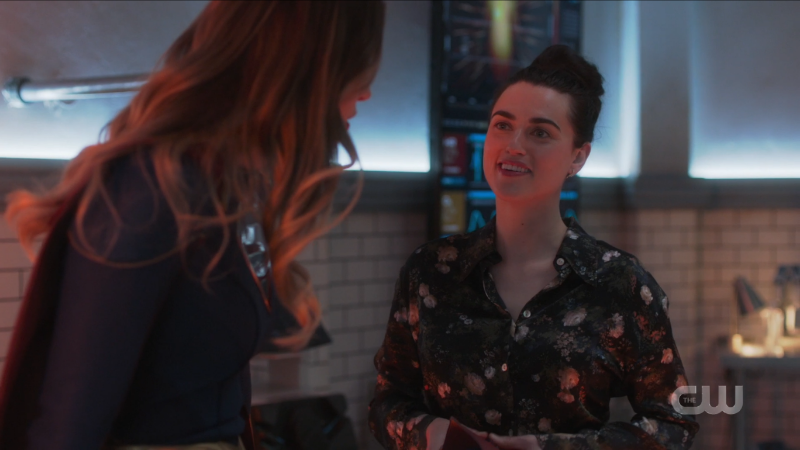 What healed her faster, the yellow sun lamps or some subconscious Lena magic, who’s to say.

Lena admits to Kara that the reason she accidentally blew up the totem was because her magic is linked to her emotions and she lost control when she saw Lex again after thinking she was free of him .

She tells Kara that it’s what happened to her mother, something she had held back for fear of being judged or worse, shunned, the way everyone Back East did despite once loving her mother. But Kara doesn’t blink before offering her genuine sympathy. And when Lena says maybe she should take a step back from magic for a while, Kara readily agrees; Lena was vital to the team before she knew she was a witch, and that hasn’t changed. The proof is in the tanning bed. 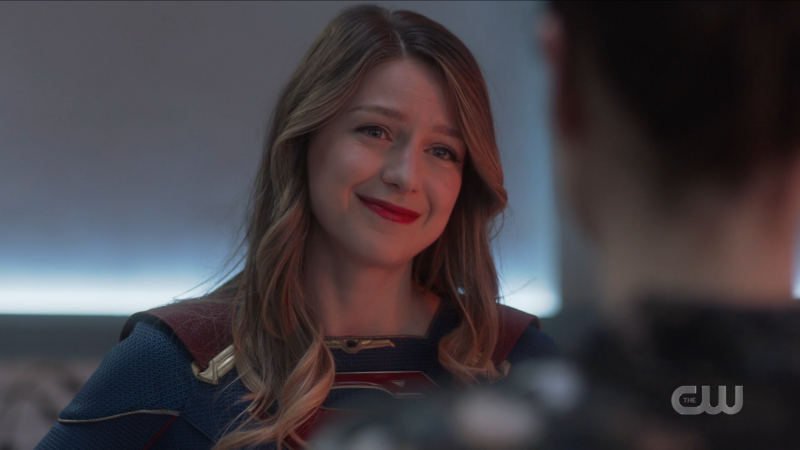 You know that TikTok sound that’s like, “Yo bro? Who got you smiling like that?” That’s all I hear when I see this.

When Kara goes back to the war room in the Tower, Alex immediately greets her with a hug. It’s one of those moments that is so small but meant a lot to me, personally. Because of course at this point Alex is both at the point that she trusts Lena to watch over her and doesn’t need to be the one hovering over an unconscious Kara, but also is still going to feel full-body relief when she gets visual confirmation her baby sister is okay.

But Kara doesn’t want to waste any time, so Brainy dives right into the update. He figured out that Lex was hiding out in the future, which explains some of his new gadgets. Kara is stressed that her two most annoying villains are paired up, so Brainy suggests they use the totems they have to their advantage. But Kara and Alex don’t love this plan, considering all the havoc the totems have wreaked so far. 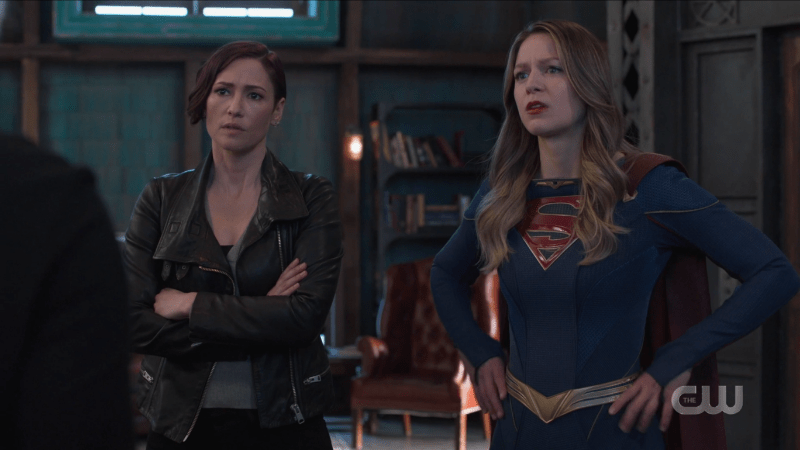 The way I would yell NEVERMIND if the Danvers sisters ever looked at me like this after saying an idea.

Kara says their job is to protect the totems, but considers the possibility that they could use the energy of the totems without weaponizing them, the way Nyxly did to shield herself.