Previously on Supergirl, you may have heard, there was a Crisis, and after that Crisis some folks from some of the Infinite Earths that were destroyed got rocketed to the newly formed Earth Prime, including a bunch of Brainys, including a Lady Brainy who told him that dumping all his emotional connections and working with Lex Luthor is the only way to stop Leviathan.

And so, Brainy does. At the top of this episode, he breaks another Earth’s Winn Schott out of a prison transport bus and takes him to Lex Luthor. It’s all very ominous.

Across town, Kara, Alex, and Kelly are having a breakup feast for Nia, who is trying to put on a brave face about her breakup with Brainy. 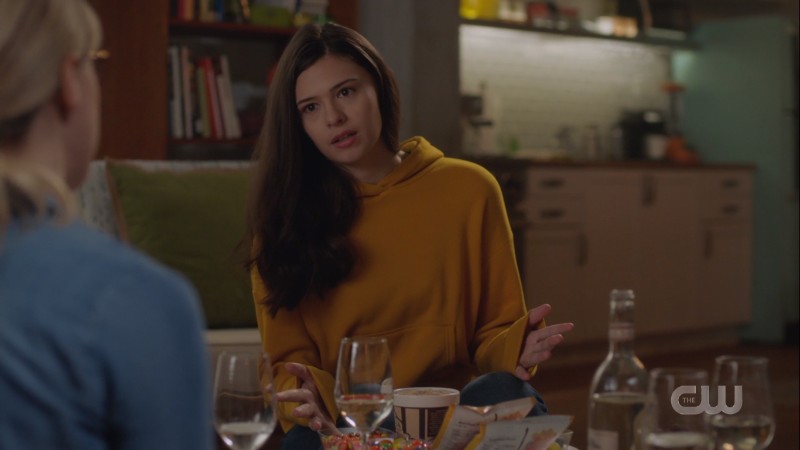 They’re all being so cute and supportive and I love it. Nia tries to change the subject and they talk about how they’re all nervous about what Lex is up to instead. ‘

After Brainy delivers Not-Winn to Lex, they have a drink and Lex is impressed Not-Winn managed to get himself arrested within 16 hours of being on this Earth. Not-Winn calls himself the Toyman, like his father, and Lex wants to help him for reasons that will not become clear until later in this episode. He gives Toyman a ticket to ToyCon and access to a nemesis.

Then it’s off to find his sister, who is pissed he stood her up. 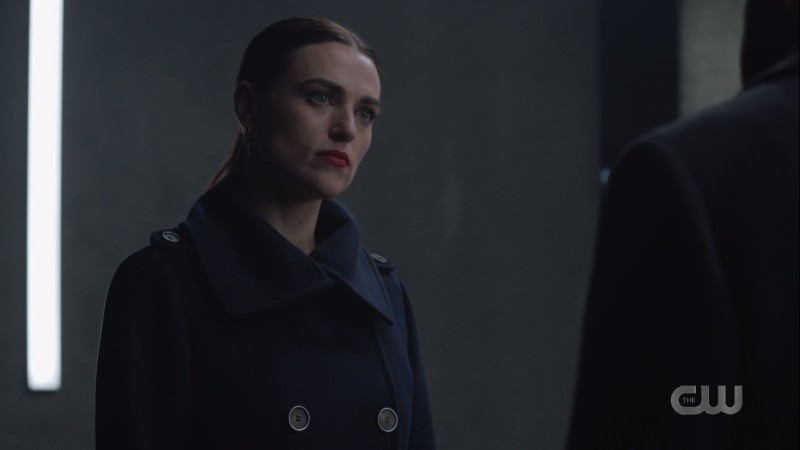 Lena looks like she’s about to appear from the shadows to tell a teenager they’ve been chosen for a dangerous destiny.

This Earth doesn’t have the q-waves she needs to complete Non Nocere, and she’s back at square one, and could have used her brother’s genius, evil as it may be. Lex is a little salty because Lena seems to have undersold Leviathan, and Brainy agrees that they’re the biggest threat right now. Brainy promises to abide by Lena’s “nobody gets hurt” rule, so Lena agrees to talk to Andrea to see what she can find out about Leviathan. In return, Lex promises to get her a new source of q-waves. 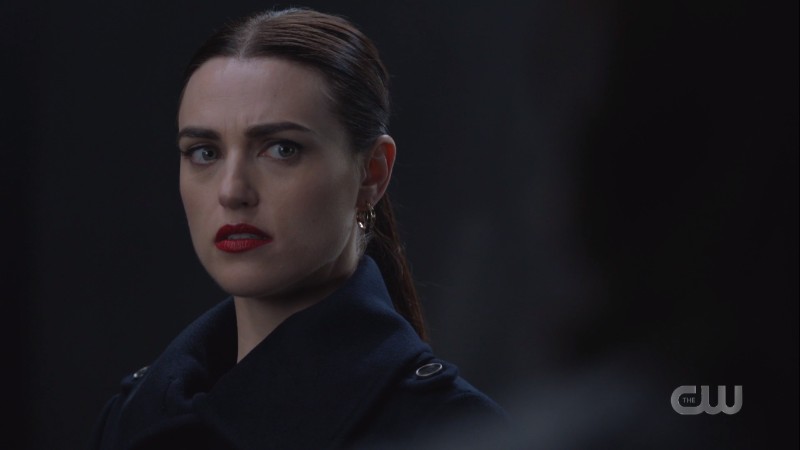 Lena’s face when she saw Brainy hurt my feelings.

The next day, at ToyCon, Lex is admiring his little action figures when Kara and William approach for a quote, overcompensating for their hatred with a high dose of cheer. That is, until partway through the interview when William “What is Chill” Day starts interrogating Lex instead. So Lex pulls Kara aside and tells her to get her British Ken Doll in line or he’ll make sure he can never report anything again. 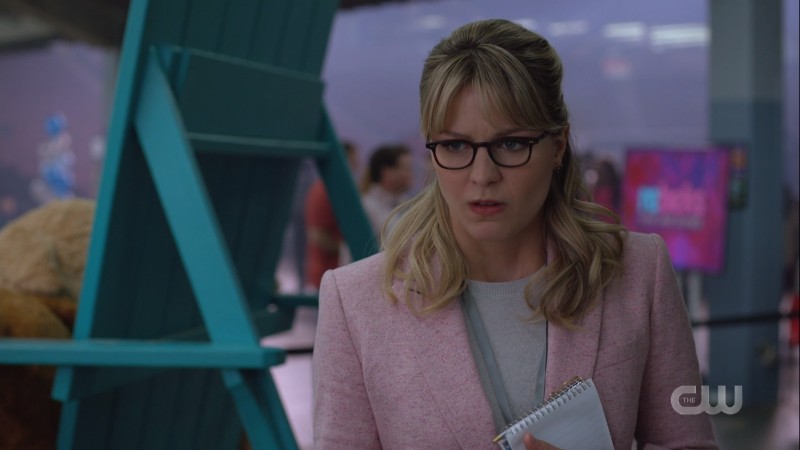 “I can’t wait til Lena kills you again.”

He then makes sure she has to destroy whatever she did record by saying “Kara Danvers is Supergirl” into it, which was kind of funny because of how flustered Kara got. And anyway, Kara can’t talk anymore because Alex calls in to tell her that there’s a sniper at ToyCon so she has to go suit up. 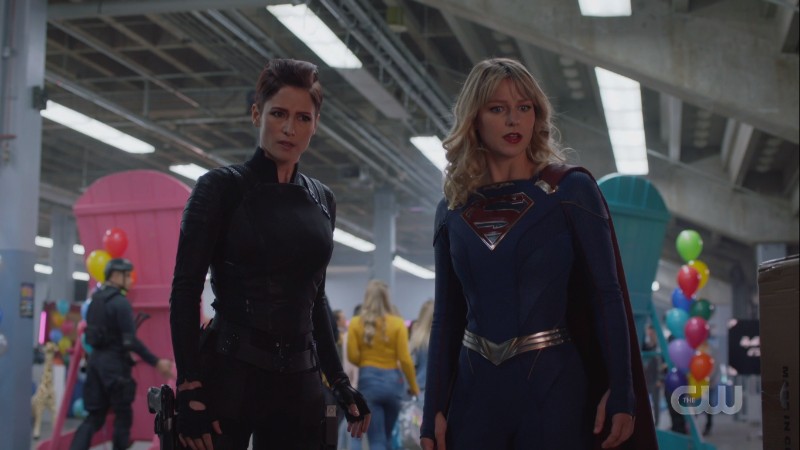 “It’s like that scene from Aladdin; surely these are real monkeys who have been turned into toys. I CRACKED IT.”

And Kara realizes the toy monkeys are bombs just in time to dive over them and protect everyone. They see Toyman, who looks an awful lot like their friend Winn, but before they can even really begin to wrap their heads around it, another Winn shows up, this one in a Legion ship and with a future suit on. 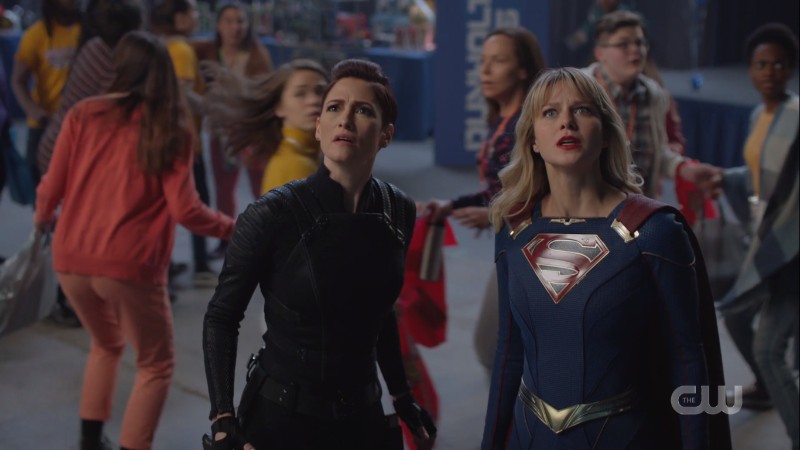 Future Winn frantically tries to ask Brainy for help and Alex talks him down and asks him to explain what’s happening. They learn that Winn has a wife and daughter, and Alex and Kara are so, so happy for him. 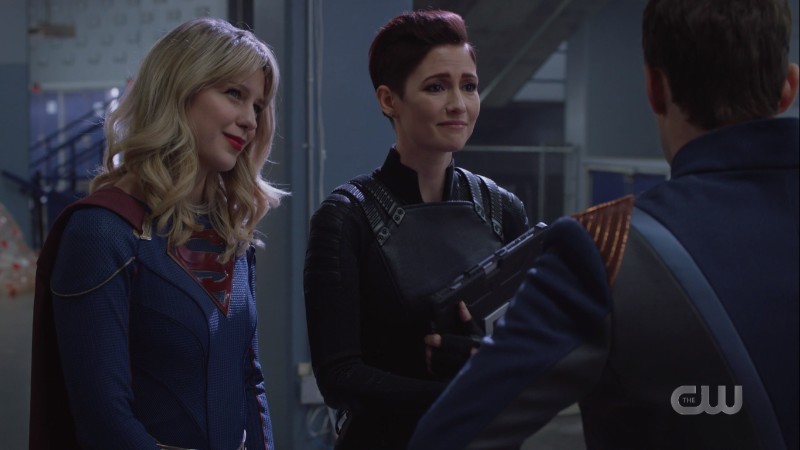 LOOK AT THEIR LIL HAPPY FACES

Winn explains that in his timeline, some Time Cops showed up to arrest him for the Toyman’s crimes, and if they don’t stop him, he could mess up Winn’s timeline and make it so he never met his wife and children. I’m not entirely sure how both of those things could be true but I gave up trying to understand the logic of the Arrowverse’s concept of time and space about three seasons of Legends of Tomorrow and two Crises ago.

Winn is confused; why wouldn’t she want Lex Luthor, American Hero, to be near his ship. 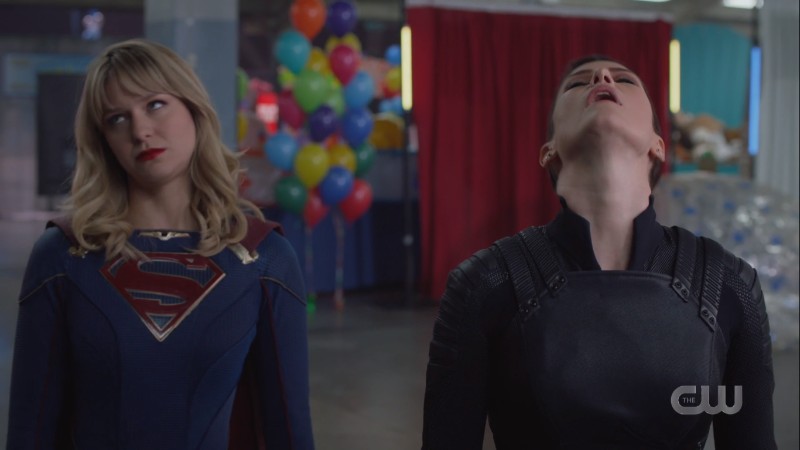 When I call myself queer and a straight person tries to tell me that word is offensive and I shouldn’t use it.

The Danvers sisters decide they need J’onn to fill Winn’s memories in ASAP.

Over at CatCo, Lena goes to talk to Andrea about Leviathan. 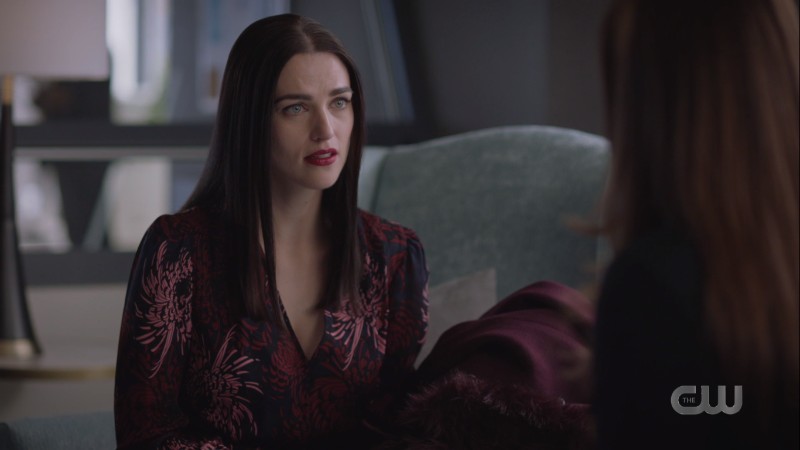 You’re really going to tell me she wore this outfit and wasn’t intending to seduce Andrea if that’s what it took?

Andrea is relieved to not have to lie anymore; she was just trying to protect her friend. But Lena quickly learns that in this timeline, Leviathan never called on Andrea. She was never The Shadow. Andrea looks scared. Lena reassures her that they’re in this together. She invokes the promise of their youth: You jump, I jump. 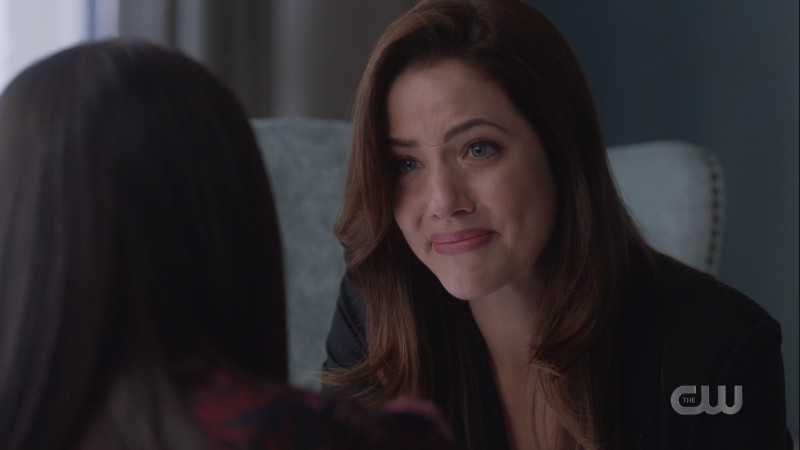 “I’m so happy I could just kiss you.” 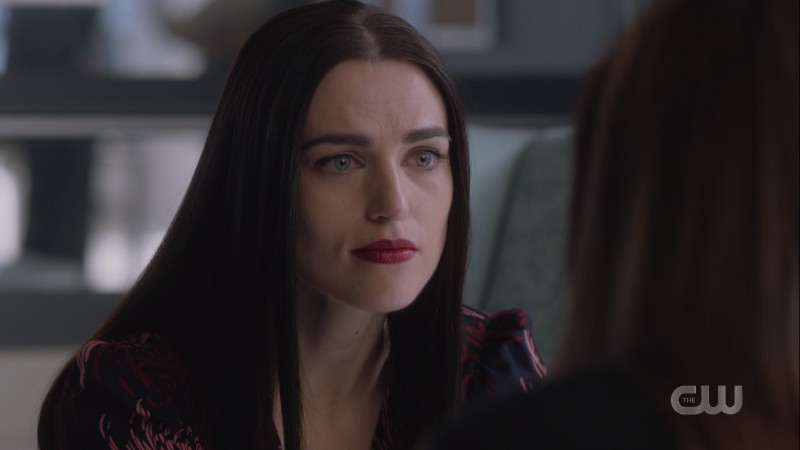 They have more chemistry than Kara and William JUST SAYING

But after she leaves the CatCo office, Lena’s face is stone again as she calls Lex and says the deed is done. She has Andrea wrapped around her finger and they’ll know if Leviathan calls on her.

You know how they say that if you smile in the mirror enough your mood will actually start to improve? I’m kind of hoping that if Lena keeps trying to fake friendships it will remind her how nice friendships can be, despite the risk of pain. We’ll see.

Alex and Kara head to J’onn’s office to show Winn the new place, and Kara is delighted to find that there’s a secret elevator that leads up to a secret lair. J’onn reveals that he built them a SuperFriends HQ, just like Star Labs, or the Arrow Cave, or even the Waverider; a place they can meet and plan without a bunch of randos eavesdropping. Or, you know, Lex Luthor. He was inspired by Barry’s idea to secure the Hall of Justice. 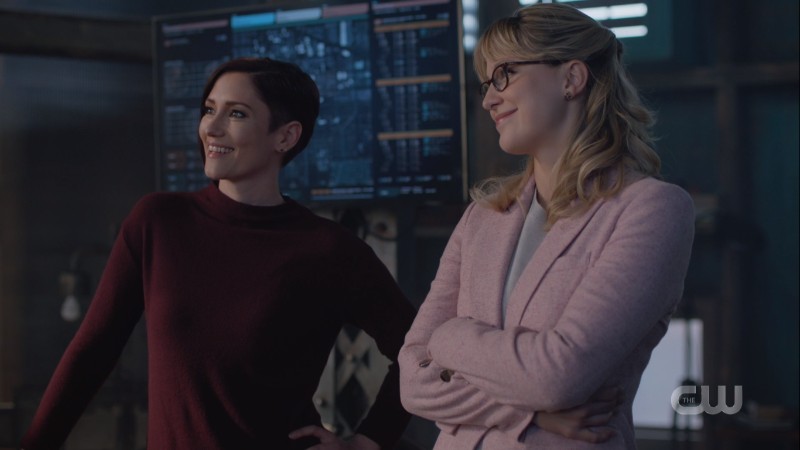 “I’ll miss those Canadian extras but this is really nice.”

They’re going with The Tower for SuperFriends HQ, but we’ll see if that sticks. J’onn gives Winn back his memories of the pre-Crisis timeline, and after a bout of extreme nausea, he remembers everything.

Back on the other side of the good/evil line, Brainy says that Lex has what he needs, so he should call off the Toyman now, but Lex says that’s someone else’s problem now.

Valerie has written 401 articles for us.