LADY GAGA’S BIRTHDAY:
Hey, not only is it Lady Gaga’s birthday today but it’s also Robin Roemer’s birthday (she’s our photoblogger HAPPY BIRTHDAY ROBIN ROEMER)! In honor of Robin’s birthday, Lady Gaga took a topless photo of herself in her new favorite wig with a communist teacup. Who doesn’t love communism though really. 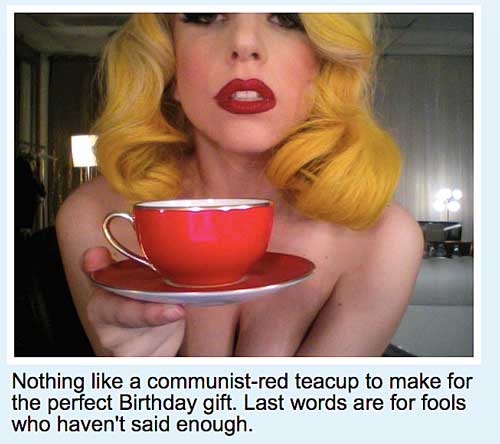 Gaga is currently number one on the UK singles chart and last week became the only act in the digital era to top the 5 million sales mark. Also this time last year she was performing at Dinah Shore, so crazy right? Gaga’s “The Fame” logs its sixth week at #1 in the U.K., which is the longest run for an album by an American since Michael Jackson.

In her show in Brisbane, Australia, everyone sang Happy Birthday to her:

LINDSAY LOHAN:
Samantha Ronson actually responded to a tweet from Lindsay Lohan, which is a massive cause for celebration, as you can imagine. It doesn’t really matter that it was sort of a dig:

Also; at Jezebel, Dodai wonders why the hell Lindsay Lohan and other female celebrities actually hang out with Perez Hilton and go to his events when he talks crazy shit about them. (@jezebel)

ANISTON:
Just when we were pretty sure we didn’t care about Cougar Town, it turns out Jennifer Aniston is apparently slated to play a lesbian on it! When she can find time between filming new movies and allegedly being devastated forever and ever over Brad Pitt, she’s going to appear in an episode of her good friend Courtney Cox’s show, and has requested to play a lesbian so she can do something outside her “norm.” (@gather)

SPRING BREAK:
“Paris Hilton Was Taking It From Behind From Some Rock Star…” An MTV staffer recalls Spring Break in the format of Esquire’s “What I’ve Learned.” (@deadspin)

VERY SPECIAL EPISODES:
The Most Ridiculous “Very Special” Sitcom Episodes Of All Time: obviously I’m So Excited is included. (@huffpo)

WEDDING:
The British Parliament just got a little gayer this weekend when Chris Bryant, the Minister of State for Europe, married his partner in a civil ceremony in the Palace of Westminster. Look how cute they are! They match! (@towleroad) GIRLS:
Oh look, surprise, it turns out girls don’t actually suck at math! This study says so! It is true, though, that being constantly told you suck at math makes you less likely to succeed at math. The writer of the article points out also that, even given cultural factors that make women less likely to become mathematicians or scientists, it doesn’t erase the academic world’s problems with gender and sexism. “Even if male math geniuses outnumbered female geniuses 3-to-1, Hopkins said, it would be reasonable to expect one female math professor for every three male professors at places like Harvard and MIT. “But in fact, Harvard just tenured its first female, after 375 years,” said Hopkins.” Yeah, what’s up with that, Harvard? (@sfgate)

WHITE PEOPLE:
A new book is wowing critics — A History of White People: “Nell Irvin Painter’s title, “The History of White People,” is a provocation in several ways: it’s monumental in sweep, and its absurd grandiosity should call to mind the fact that writing a “History of Black People” might seem perfectly reasonable to white people. But the title is literally accurate, because the book traces characterizations of the lighter-skinned people we call white today, starting with the ancient Scythians. For those who have not yet registered how much these characterizations have changed, let me assure you that sensory observation was not the basis of racial nomenclature.” 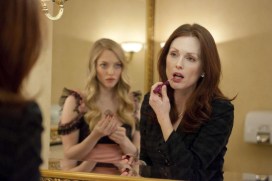 CHLOE:
The new film featuring Amanda Seyfried doin’ it with Julianne Moore isn’t wowing critics – specifically, they’ve said that it “can’t be recommended even to people who just want to see Amanda Seyfried naked.” “Critics generally like the first two thirds of the movie, but say it falls apart toward the end when Chloe turns out to be a psycho. All three leads turn in good performances, and one reviewer claims a monologue by Moore about women becoming less desirable as they age redeems the entire film. But despite good acting and cinematography, eventually the plot becomes far too ludicrous and overly-serious, like trying to intellectualize a late-night Cinemax movie.” That might be true, or they might be underestimating how bad we want to see Amanda Seyfried naked.

LESBIAN FASHION:
Indian designer Niki Mahajan has made lesbianism the theme of her show this week at Wills Lifestyle Indian Fashion Week. “I chose to use the subject of lesbian love for my line because it is an important issue and the message I wanted to give to my audience was that when a husband can love his wife…why can’t a woman love another woman? …My show showed that love between two woman is natural. They are so happy with each other yet they can’t be happy because the society doesn’t allows them to be so,” (@sify)

MATZOH BALL SOUP!
Why the hell is Passover food so f*cking expensive? (@slate)

WESTBORO TURNAROUND:
How to turn Westboro’s protest into a positive thing:

DERRICK MARTIN:
The gay teen who’s been ostracized by his community and parents for bringing his boyfriend to prom has one bright star on the horizon: he was the guest of honor this weekend for the Atlanta Gay Men’s Chorus, and may return again to another show. (@theadvocate)

GAGAROULETTE:
There have a been a lot of video covers of Telephone that are purportedly “even better than the real thing.” I can’t really speak to that one way or another, but I can confirm that this is performed by a Lady Gaga impersonator entirely through Chatroulette. (@jezebel)