A Wisconsin teacher, prompted by the experiences of a student named Allie, has begun teaching lessons to prevent gender bullying in the classroom. “It’s Okay to be Neither” by Melissa Bollow Tempelis is like a story from Chicken Soup for the Relentlessly Tortured Soul. With all of the bullying “different” kids have to endure, stories like this remind me that not everyone is an idiot. I feel even better when I see how many notes the story has until I remember Tumblr is a place where homosexuality and hipster magic dwell in peace and harmony.

Allison was biologically a girl but felt more comfortable wearing Tony Hawk long-sleeved T-shirts, baggy jeans, and black tennis shoes. Her parents were accepting and supportive. Her mother braided her hair in cornrows because Allie thought it made her look like Will Smith’s son, Trey, in the remake of The Karate Kid. She preferred to be called Allie. The first day of school, children who hadn’t been in Allie’s class in kindergarten referred to her as “he.”

Unlike most of the stories I read (or skim over as opposed to actually reading them and having to suffer from these feelings you people call emotions), this one made me appreciate how I escaped my own gender outlaw days seemingly unscathed. As a kid, I wore my fair share of boys’ clothing. I didn’t constantly object to girls’ clothing (possibly because I knew I would get a “do you know how lucky you are to have clothing” lecture) but I preferred the wiggle room boys’ clothing provided. One of my favorite pictures of me as a(n adorable) kid, is me with long shorts, a tank top, a Power Ranger doll, and a miniature baseball helmet. The helmet was black because it was my favorite color and the only reason I found the doll acceptable is because Zach, the Black Ranger, knew karate.

In 5th grade, I transferred from a private school in Chicago to a public school just south of the city. At private school, I didn’t have to worry about clothes. Since I’d been at the school since I was four, I never took the time to consider how I felt about the uniform. Girls wore skirts or jumpers and the boys wore slacks and polos. When I transferred, I was suddenly in charge of dressing myself. I chose what clothes I wanted to wear and those clothes were mostly from the little boys’ section. I had the same problem with clothes then as I do now. There’s just too much going on. I’m a simple woman and being a woman is anything but simple.

Early on in the school year while hanging out behind the school during recess, two of the maybe five white guys in my grade called me a boy. It was obviously meant as an insult but I shrugged it off and just walked away. Sustained interactions with white people were a relatively new concept as there was literally one white kid at my previous school (White Mike) so I chalked it up to them being insecure with their surroundings or something. It’s not like I wasn’t aware that wearing boys clothes and french braids placed me firmly in the tomboy category. It was just interesting that this was an insult. 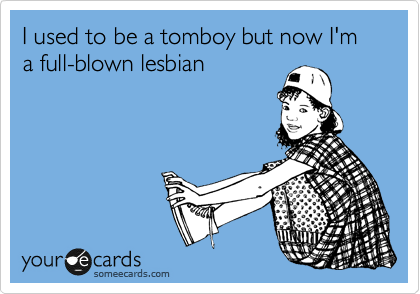 The next day when I corrected classmates and told them that Allie was a girl, they asked her a lot of questions that she wasn’t prepared for: “Why do you look like a boy?” “If you’re a girl, why do you always wear boys’ clothes?” Some even told her that she wasn’t supposed to wear boys’ clothes if she was a girl. It became evident that I would have to address gender directly in order to make the classroom environment more comfortable for Allie and to squash the gender stereotypes that my 1st graders had absorbed in their short lives.

I never told anyone about the encounter but the next time we went school shopping, I didn’t venture into the boys’ section. My parents had never said anything explicit to discourage me from dressing how I wanted. Occasionally my mom would remark on my tomboyish tendencies, or note aloud that I looked like a little guy if I was wearing something especially boyish but she never told me not to do it. But after one remark from kids I didn’t even know or like, suddenly things felt a little different.

This is all to say that even at a young age, most of the damage has been done. And from that point, we’re working backwards to try and salvage a reality in which kids genuinely think it’s ok to be different, or don’t even think anything of it at all.

My job is not to judge, but to teach, and I can’t teach if the students in my class are distracted or uncomfortable. My job is also about preparing students to be a part of our society, ready to work and play with all kinds of people. I found that teaching about gender stereotypes is another social justice issue that needs to be addressed, like racism or immigrant rights, or protecting the environment.

At six the kids were already self-policing. Even with these lessons, it will take some follow up for these kids not to revert to their, and largely society’s, ways down the line — especially when the aggression that leads to bullying sets in before first grade. As outsiders we’ve learned to embrace being different or weird or nerdy and perhaps these qualities have become a sense of pride for a lot of us. But for most kids, interacting with difference is something that has to be learned, like riding a bike. This teacher gets it. You can just be you and not give a fuck but it’s much appreciated if there’s someone out there who makes being the person you’re meant to be a little easier.