Researchers at Indiana University have confirmed what any queer person who’s been on a date in hetero spaces already knew — that a lot of straight people are still rather uncomfortable with public displays of queer love (or lust or like or drunken-poor-decision-making-with-strangers). The study, which appears in the December edition of the American Sociological Review, was a survey of over 1000 individuals designed to gauge the larger public’s perceptions of queer relationships compared to straight relationships. The takeaway of the study? Straight folks are totally okay with our relationships, as long as we don’t try to get married or touch each other in public.

Let’s start with the good news. Straight folks appear to be pretty okay with us having the right to visit our partners in the hospital, take family leave to care for our partners, inherit property from our partners when they pass, and to share health insurance. The researchers of the study initially thought that they’d find that heterosexual people would be less supportive of these kinds of rights, a category they’ve named “formal rights.” But, what they found is that straight people, whether men or women, are just as accepting of granting these “formal rights” to queer couples as they are to unmarried, cohabiting straight couples. That holds for both lesbian and gay male couples. Not surprisingly, queer folks are significantly more accepting of the idea of granting formal relationship rights to other queer folks than straight people are. Encouragingly, there’s also no divide between gay men and lesbians supporting formal rights for each other! (Go Team Rainbow!) The results indicate that queer people are more willing to grant these formal rights to queer couples than they are to straight, unmarried couples. However, they’re still more more accepting of granting straight, unmarried couple those rights than straight men are; the authors suggest this could be because queer folks “may be more sympathetic to cohabiting couples of all types, but especially to other same-sex couples.”

So, the takeaway seems to be that, at least conceptually, hetero people see us as not much different than unmarried straight people. It’s a start. Unfortunately, when they’re confronted with the physical reality of our relationships…well, we’ve got a ways to go. 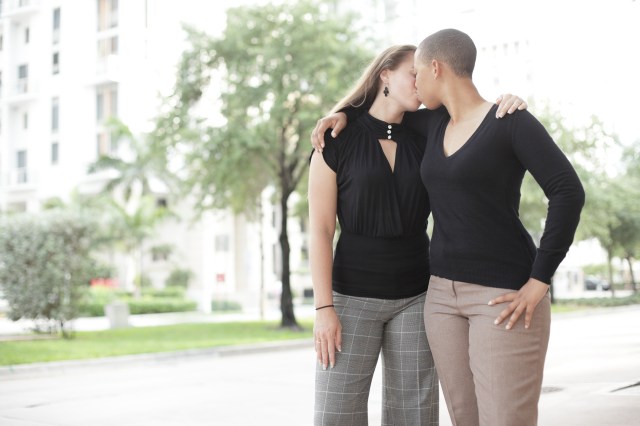 Across the board, this study demonstrated that straight people believe that public displays of affections between queer people are less okay than they are between straight people. For the purposes of this study, that includes holding hands, kissing on the cheek, and french kissing. (Can I just say that until I read this study, I had totally forgotten that people refer to making out as “french kissing”?) The study refers to these things as “informal rights.” In yet another confirmation about the creepiness of male gaze, straight men were significantly more okay with public lesbian affection than they were two gay men kissing or holding hands, but still generally less okay with either than straight face-mashing. Straight women appeared to be pretty equally uncomfortable with same-gender public smooching, whether sapphic or not.

Depressingly, queer folks also appear to sometimes view their own public affection as less acceptable. Lesbians appear to view two women holding hands as less acceptable than a man and a woman, but that doesn’t hold true for their views on kissing (whether on the cheek, or full-on makeouts). That seems a little odd, since it’s hard to imagine not feeling comfortable holding my girlfriend’s hand, but being totally cool with sticking my tongue in her mouth in the middle of a park (which is where the study’s hypothetical scenarios all take place). Oh statistics, you can be so weird. Gay men, on the other hand, seem to have perhaps taken on a little more internalized homophobia. In all these situations, they indicate that the affection between two gay men is less acceptable than a straight couple. Much like the formal rights, queer people of all stripes find queer affection to be just as acceptable, regardless of gender. Oddly though, gay men seem to find lesbians kissing each other on the cheek as more acceptable than gay men doing the same. Perhaps that’s just some reflection of the general acceptability of minor physical affection between women. Or, you know, just a statistical fluke. The authors also took note of apparent internalized homophobia but also posit it could be due to concerns for safety, writing:

“This finding may be consistent with ideas of heteronormativity and internalized stigma. Alternatively, if lesbians and gays are keenly aware of same sex couples’ vulnerability to homophobic hate crimes) and harassment, this lower level of approval may be due to safety concerns for the couple rather than internalized stigma or out-group favoritism.”

Perhaps one of the oddest findings of this study is that, while straight people generally find it acceptable to grant formal rights to committed queer couple, they’re still less okay with them actually getting married. With little variance between lesbians and gay men, straight people indicated that it would be less acceptable for a committed queer to get married. Queer people, on the other hand, were totally cool with absolutely everyone getting married, regardless of gender or sexual orientation. It’s nice to see that, despite the occasional inter-rainbow tension, queers appear to supportive of each other’s rights.

As with all sociological studies, this data should be taken with a bit of a critical eye. First, while the study is just now being published, the survey data was collected back in 2010, a time when gay marriage was legal in only six states. So, while this data may have reflected attitudes then, it’s possible and even likely there have been some shifts in that period. Secondly, this study relied on presenting written scenarios in a survey, and it’s possible that being actually confronted with an amorous queer couple may elicit different reactions from people. Regardless, it appears that the queer community has a ways to go in gaining the same degree of social acceptance for our relationships that straight people enjoy. Psychology says that exposure is one of the best ways to break down discomforts. We all clearly need to spend more time sucking face in public. You know, for the greater good.