The State of the Union at the beginning of Obama’s second term as President was, as he put it, in order to report on its status, and also to give the American people a sense of how exactly he plans on changing its status. Unlike his inaugural speech, which was a fairly celebratory occasion, the State of the Union is time to Get Down To Business. It’s not exactly a blueprint for the year – it’s expected that a certain level of advanced oratory acrobatics will take precedence over hard facts – but does give us an idea of what to expect.

So what should we expect? Well, as has been a hallmark of Obama’s career so far, he emphasized bipartisanship and implied his hope that it could actually become an element of the legislative process in his second term. And it wasn’t just words — Obama chose to adopt at least some conservative rhetoric and language throughout, promising that his plans didn’t actually mean a “bigger” government, just a “smarter” one; emphasizing that none of his proposed changes should add “a single dime” to the deficit; and tying energy research and climate change to the idea of economic growth instead of environmentalism. (Also, an honorable mention to the campaign to encourage “fatherhood” and “intact families” because “what makes you a man isn’t the ability to conceive a child, it’s having the courage to raise one.”)

Whether or not these efforts at reaching across the aisle will be effective is hard to predict; if Speaker of the House John Boehner’s reactions – which included a constant expression of thinly veiled disgust, fairly perceptible eye-rolling, and a very conspicuous lack of applause – are any indication, this venture may not be 100% successful. Which is too bad, because much of what Obama outlined is pretty ambitious; it will be hard to accomplish without bipartisan support. 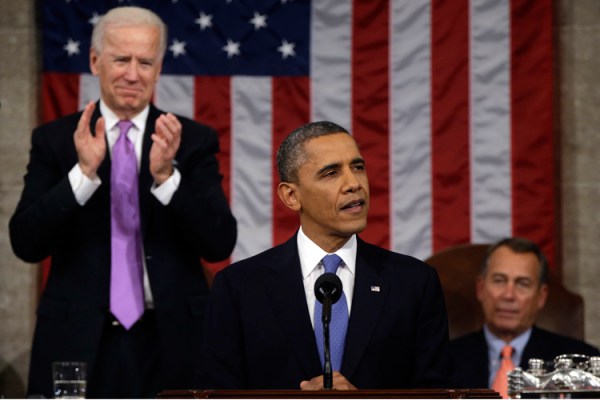 Cash Rules Everything Around Obama

If you were paying attention during Obama’s presidential campaign, his thoughts on budgeting will sound pretty familiar. We’ve cut more than half of the deficit we had aimed to cut ($4 trillion), and while some would like to address the remaining $1.5 trillion via even more spending cuts than we’ve already made, Obama would instead like to focus on closing tax loopholes that benefit the very wealthy, and protect Medicare and Social Security. He proposed further reforms to Medicare that go farther than Simpson-Bowles and would involve “taxpayer subsidies to prescription drug companies and ask more from the wealthiest seniors. In an attempt to smooth over some of the rage that this idea presumably ignited in the Republican legislators present, Obama added:

I realize that tax reform and entitlement reform will not be easy. The politics will be hard for both sides. None of us will get 100 percent of what we want. But the alternative will cost us jobs, hurt our economy, visit hardship on millions of hardworking Americans. So let’s set party interests aside and work to pass a budget that replaces reckless cuts with smart savings and wise investments in our future.

Although every politician everywhere at this point is under a great deal of pressure to create jobs, Obama talked very specifically about attracting jobs back to America from overseas. He shouted out Caterpillar and Ford for relocating jobs back to America, and in the statement that launched a thousand tech tweets, noted that “this year, Apple will start making Macs in America again.” He also explained the “manufacturing innovation institute,” which is apparently a defunct warehouse that’s been transformed into a 3D printing facility. He’s launching three more and asking Congress to create fifteen more. In other news, I still don’t really understand what 3D printing is.

While we’re relocating jobs back to America, though, we’ll also be working on a “Trans-Pacific Partnership” which will encourage trade and investment with the European Union. In other global concerns, the US will work with other allies to eradicate extreme poverty on a global scale. The work includes but is not limited to empowering women, empowering bright young people, and defeating AIDS. I hope that made Reagan spin in his grave.

In super big news, Obama announced that he wants to raise the minimum wage to $9/hour, because “no one who works full time should have to live in poverty.” This was also framed fairly conservatively, with Obama helpfully pointing out that someone making more money will be less likely to need to rely on government support, and can choose between “groceries and the food bank.” Part of this initiative will also be to incentivize companies to hire more, and to hire specifically people who “have been out of work so long that no one will give them a chance anymore.” 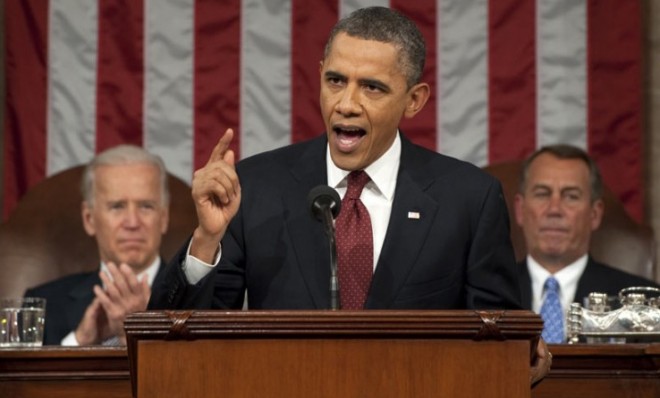 She Blinded Me With Science and Also Climate Change

Obama reminded us of the government-funded work on the human genome project and the work being done to map the human brain in an effort to combat Alzheimer’s. Interestingly, he also reminded us of the monetary value of that research, pointing out that “every dollar we invested to map the human genome returned $140 to our economy” and framing these research efforts as job creators.  This may have be a setup for his transition into talking about energy and climate change, wherein he shouted out renewable energy and lower carbon emissions and then dropped this truth bomb:

Before anyone could get too mad, though, Obama slipped in that “we can make meaningful progress on this issue while driving strong economic growth.”  He also pointed out that other countries have historically outdone us on clean energy, and suggested a sort of space race but for clean energy. I’m interested in whether this framing is going to continue in his administration’s language from here on out, or whether this was a one-time thing.

Perhaps more interesting, though, is that Obama introduced an Energy Security Trust that’s tasked with figuring out how to get our cars to run without oil at all. He also challenged American citizens as a whole to cut our home energy consumption in half, and offered federal support to states which try to create jobs and lower energy usage.

Noting that businesses are more likely to be attracted to places that have working roads, Obama introduced the “Fix-It-First” program, which is a job creation program that will get people working on urgent repairs across the country and was also, if I remember correctly, a key plot point of Wreck-It Ralph. “Fix-It-First” is related to the “Partnership to Rebuild America,” which is supposed to help funnel private capital into the rebuilding projects so that it’s not all taxpayer money being used. Also on the list of things we need to fix is the housing market, so Obama is introducing a new law in that would give “responsible homeowners” the chance to refinance at today’s rates.

In exciting news, Obama’s newest plan in education is to make high quality preschool education available to every child in America, which sounds totally awesome. I’d like to look at some of the research he talked about in support of his point — like the fact that preschool is correlated with lower teen pregnancy and violent crime rates — because I’m not clear on whether those things are actually causal or are just both associated with higher-income areas, but nonetheless, this sounds like a good plan. He also applauded systems in place like that of P-TECH school in Brooklyn, where students graduate with both a high school diploma and the equivalent of an associate’s degree in computers or engineering. Many twentysomethings would perhaps point out that the barrier to jobs right now isn’t necessarily a lack of qualification, but it certainly sounds like an interesting option to have.

Which brings us, actually, to Obama’s next point, which was that college should be more affordable and less likely to leave people in crippling debt. Rather than providing more federal subsidies, he wants to put more pressure on colleges to “keep costs down” by updating the Higher Education Act to take into account how good a “value” colleges are when deciding whether they should receive certain types of federal aid. As someone who has both attended a very pricey private college and now works at a low-tier state university, I have mixed feelings on this; certainly there are some colleges that could stand to shave a few thousand dollars off their tuitions, but plenty of universities (especially public ones) are already spread pretty thin, and it’s unclear what Congress is going to judge as being a “good value” — for instance, will things like arts and humanities seem important enough to make the cut? Hope so! We’ll find out via the government’s new “scorecard” which families can use at home to determine different colleges’ “bang for their buck.”