Orphan Black was, and is, one of my favorite shows. EASILY top three of all time. It’s smart and dark and twisty and FUNNY and charming and it highlights the complexity of humanity so brilliantly. And it’s GAY. Oh, it’s so gay. It’s never a huge thing — in fact, one of my favorite lines from the show is, “My sexuality isn’t the most interesting thing about me,” — but it’s always a true thing, and never shied away from (“Fetch me something gay.”) or shamed. And one of the most brilliant things about Orphan Black, the thing that strikes me anew every time I watch so much as a single scene from the show, was always Tatiana Maslany. The way she shifted from clone to clone seamlessly in a way that makes you forget on a regular basis (no matter how many times you watch the show), that one woman plays all of these characters. I

All this to say that when I first heard that Orphan Black was going to continue in the form of an ebook, I was happy, but didn’t really pay attention. I knew I’d consume it and I knew I’d enjoy it (the comics are brilliant, for example) but I didn’t feel any urgent rush to figure out exactly what was happening — nothing could come close to touching the show — until I learned Tatiana Maslany was going to be narrating it. Then I was paying attention. Because Tatiana Maslany is the reason.

I still wasn’t entirely sure what to expect. It’s a different medium entirely, it’s been a few years, it could go a few different ways. So I tried to keep my expectations low even though as I queued up the audiobook, my skin was practically humming with the excitement. (New! Content! For a beloved show once thought gone forever! THE TV NERD’S DREAM!)

The Serial Box story (called Orphan Black: The Next Chapter) opens with the Orphan Black theme music playing under Tatiana Maslany reading the credits for the story and my heart was already doing backflips. I knew I was doomed from the start, but the content still delivered.

The Last Chapter picks up eight years after the events that closed out Season Five of the series. And I will confess I’ve never listened to an audiobook, only scripted podcasts, and it’s similar to those in that there are sound effects (ringing phones, scraping chairs, etc) and we pick up following Vivi Valdez, who is on a secret mission of some sort.

And one thing I somehow hadn’t anticipated? Being the one and only narrator of this series, Tatiana Maslany plays ALL THE PARTS. All of them! All of the clones, sure, but also all of the men, and any other characters we come across. ALL OF THEM. And she does so with typical Maslany ease. There’s even a point where the narration switches from being from Vivi’s point of view to Cosima’s (!!) and you can TELL without even looking at the text or even necessarily absorbing the content of the words the exact moment that perspective shifts.

The series doesn’t waste time giving you little updates on favorites like Sarah and Kira, Felix and Allison, even little Charlotte (who is in university now!) and, of course, Delphine. (Yes it was a little strange to hear Tatiana playing the part of both Cosima and Delphine, no I didn’t hate it.) 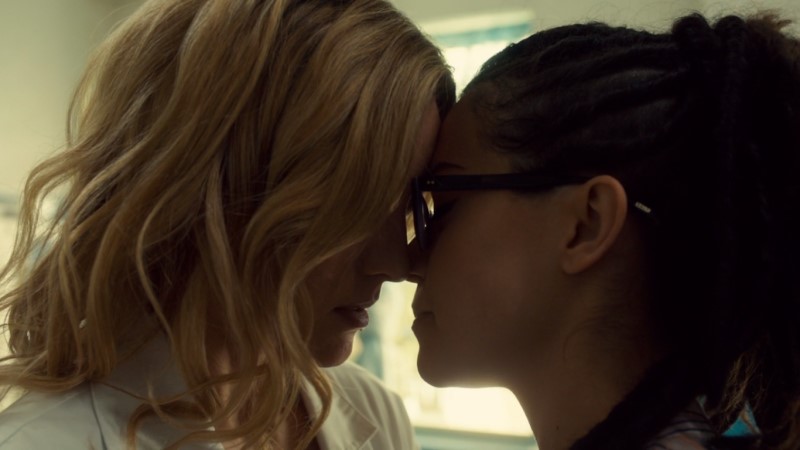 In case you forgot where Cosima and Delphine left off, I’ll leave this here. For science.

I’m going to drop a wee spoiler below and I’m warning you now. But if I haven’t sold you already maybe I never will. Basically my official review is: if you loved Orphan Black, you’ll love this. New chapters will drop every Thursday, and it’s my understanding there will be ten chapters, each about 45-60 min each, which is very Orphan Black of it.

I want to make the comments of this recap an open forum to discuss — a book club, of sorts. If you want to discuss future chapters, just make sure you thread your responses. (For example, make your main comment HELLO I WOULD LIKE TO TALK ABOUT CHAPTER TWO and then reply to your comment with your feelings, so your feelings are hidden when someone is just scanning the comments.)

But let the Chapter 1 spoiling start now, because I have something I want to discuss.

And that thing can be summed up in one word:

See you in the comments!

Join A+
Related:orphan blackThe Next Chapter