According to the Saskatchewan Appeal Court, marriage commissioners can’t refuse to perform same-sex marriages on religious grounds, because it’s illegal and backwards and they say so.

In 2005, Orville Nichols, a marriage commissioner and devout Baptist, refused to marry a same-sex couple because he said it was against his religious beliefs. He launched a complaint with the Saskatchewan Human Rights Commission against the provincial Department of Justice, but in 2008 the Commission ruled that as a civil servant, Nichols was obliged to perform marriages regardless of his religious beliefs (as civil servants, marriage commissioners are the only option for anyone who wants a non-religious marriage ceremony). Even though Nichols’ attempt at appeal failed, the Saskatchewan Appeal Court – the highest court in that province – was still asked to rule on whether commissioners had the right to refuse to perform marriages on religious grounds. 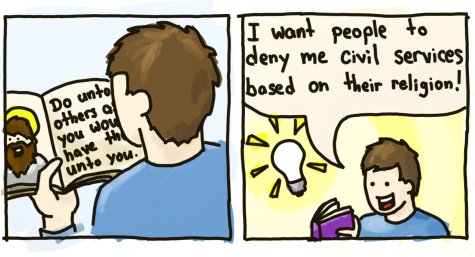 from Slap Upside the Head

2) Allowing only those appointed before November 2004, when gay marriage was legalized, the right to refuse them.

And it shot down both.

According to Justice Robert Richards, either option might create the chance for discrimination, and so both were unacceptable. In his decision, which can be found here, he wrote:

“Either one, if enacted, will create situations where a same-sex couple contacting a marriage commissioner for the purpose of getting married will be told by the commissioner that he or she will not provide the service requested. This is not a merely theoretical concern. It is entirely clear […] that some marriage commissioners will refuse to perform same-sex marriages if The Marriage Act, 1995 is amended to give them that option.”

Justice Richards also rejected the argument suggested by the amendment’s supporters that gay and lesbian couples refused by one commissioner would still be able to go to another:

He was also concerned that “a significant number” of commissioners might choose not to perform same-sex marriages, and that their decision to (not) do so wouldn’t be offset by an amendment guaranteeing that a certain number of commissioners willing to perform them would be available. Geography was also an issue, for “if commissioners can opt out of the obligation to perform same-sex marriages, a situation might quickly emerge where gay and lesbian couples (particularly in northern and rural areas or smaller centres) would have to travel some distance to find a commissioner willing to perform a marriage ceremony.” This is particularly in Saskatchewan, which is not heavily populated at all.

But best of all? Best of all, he says that even if all that other stuff were accounted for, the amendment still wouldn’t have passed, because anything that puts gays and lesbians in a situation where they’re refused a service because of sexual orientation is a huge step backwards and would perpetuate disadvantages and stereotypes, in addition to going against the Charter of Rights and Freedoms. The decision doesn’t just say ‘maybe this isn’t legal,’ it says ‘this definitely isn’t legal and also you are a huge tool for suggesting it should be.’ Which is the best possible thing it could say.

Opponents, of course, found this disappointing. According to CTV News, Larry Bjerlan, a marriage commissioner from Rose Valley, Saskatchewan, says the decision goes against his right to refuse work on religious grounds: “All we’re asking for are the same rights that anyone else has — and that’s to refuse to do work. If the work is contrary to what your religious beliefs are, then you shouldn’t be forced into doing it. […] If they’re going to suggest penalizing me by fining me or something of that nature [for not performing same-sex marriages], definitely I’ll quit.”

I hope he does.