This is a recap of Rupaul’s Drag Race episode 1411. Spoilers below.

I hate to admit it… but RuPaul knows how to create great television. Was the pretense for this Lip Sync Lollaparuza annoying? Yes. Is it absurd to still have this many queens remaining this late in the season? Yes. Is it kind of silly to go through all this just to send home the queen who would’ve gone home with normal rules? Absolutely. But was this episode engrossing beginning to end? It sure was!!

It’s the same day in the workroom and Daya is, once again, upset. She says that it doesn’t make sense for them all to be equally in the bottom and this time I agree with her. DeJa, however, is having the time of her life. I’m happy for DeJa and it’s fun to watch her bask in her win, but it really does highlight the absurdity of this whole thing. DeJa was good but she wasn’t THAT much better than people like Angeria and Bosco. It was not an all-time Snatch Game performance.

Sorry. The rules. A member of the pit crew named Calix spins a bingo cage filled with the queens’ names — except DeJa who gets to watch it all from backstage. When a queen’s name is drawn, she gets to choose her competition. Then the competition gets to choose which of the five songs they’ll be performing. The winner is safe and gets to join DeJa backstage. The loser has to lip sync again until one remains.

The first ball picked says JK. My brain immediately thought Simmons?? before I remembered the concept of initials. It’s Jasmine! And who does she choose? Daya, of course! Was this manufactured by the producers? Probably. But I don’t care. I love when behind the scenes bickering gets to be fought out in a lip sync.

Daya chooses “Respect” by Aretha Franklin. Jasmine dances her ass off, but I have to admit that Daya’s strategy to just feel the lyrics and keep herself front and center really works. In a night of incredible lip syncs, this isn’t one of the standouts, but they both do a good job and Daya rightfully wins. Jasmine rejoins the group.

The next ball is WP which made my brain think WordPress before I, once again, remembered initials. It’s Willow Pill and she chooses Bosco with the strategy that Bosco will choose the song she wants most. It works. Bosco picks “Never Too Much” by Luther Vandross. I think I blacked out for this entire performance because they were both so good and hot. My only complaint is that they don’t make out which seems like a real missed opportunity. Willow’s strategy works! She wins! In her confessional, she says, “I don’t bark. I don’t hiss. I just do.” Obsessed.

Ru asks the remaining queens how they feel about a three-way. We know Angeria likes threesomes because it seems like she recently had one with Willow… but she says she’s never had one on-stage. Jorgeous’ name is chosen so she gets to pick the song and she goes with a Sasha Fierce classic, “Radio” by Beyoncé. This might be the best lip sync of the night. The previous one may have been hornier for me personally but oh my all three of them are such great dancers and, yes, are also hot and it’s just so good!!

Jorgeous wins. Jorgeous is not surprised. And even Daya admits she now understands why Ru is obsessed with Jorgeous.

The next ball chosen is Lady Camden. She picks Bosco and for the first time in the night Jasmine loses her excitement. So far she’s been such a bundle of joy as if she’s just happy to be there and getting to perform. But she’s really bonded with Angeria and having to go against her hurts.

We’ll get to that, but first we have Bosco and Camden performing “Don’t Let Go” by En Vogue. Bosco is dressed — and largely undressed — in black leather. Lady Camden is in hot pink punk. They look like the black and pink houses on PCH and I would happily move into either of them. 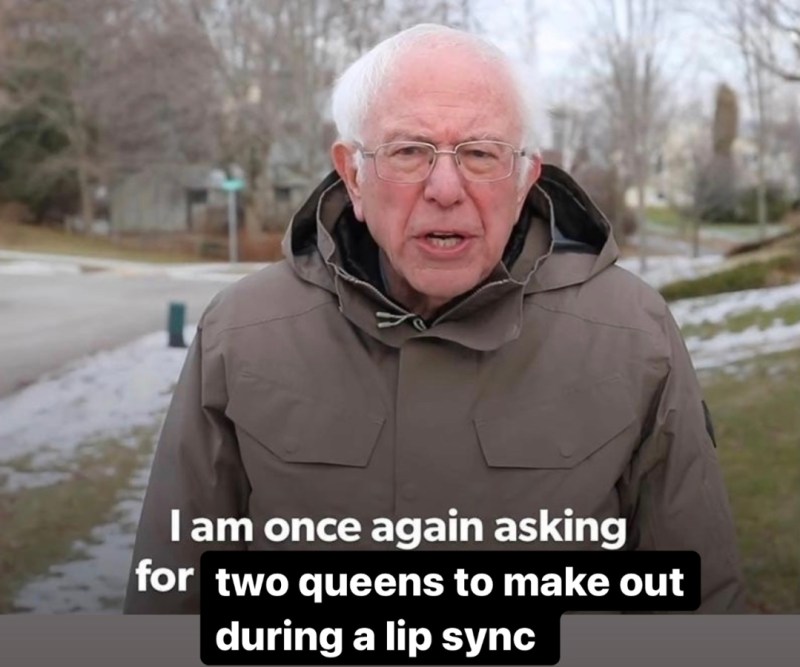 It’s a close one but Camden wins. She gets really emotional and says she needs a hug. Daya is ready for you, babe! When she gets backstage, they all do hug her and Daya touches her hips and tells her she was turned on. Camden doesn’t seem that into it, but Daya shifts crushes quicker than me.

Next we have Angeria and Jasmine performing “Love Don’t Cost a Thing” by JLo. This is another great lip sync — but once again while Jasmine brings raw energy, her opponent brings precision. That said, what Jasmine is doing is working for at least one person. Daya says that her longtime rival looks so good. As for me, my favorite moment is when Angeria passes by Jasmine and does a fun little move on her body.

Angeria wins! Willow seems even happier than Angeria. She says she’s glad she can cuddle with Angeria while watching the rest. Okay, Willow.

That means our grand finale is Bosco vs. Jasmine. Two talented trans women singing one powerful Diana Ross song. It’s “Swept Away” and that gives both queens plenty of opportunity to show what they can do. Bosco really leans into her sex appeal and that is appealing to me sexually. She says she’s displaying her taint for RuPaul and the judges and the rest of us are just lucky to be here.

Bosco wins! As she walks away, Jasmine says, “Go be a Gemini winner for both of us.”

So after all that, a queen has finally gone home. I’ve grown to really love Jasmine and I’m going to miss her energy even if she was the right choice. Despite losing this lip sync-athon, I hope Jasmine doesn’t lose her reputation as a lip sync assassin. Being a talkative burst of trans energy isn’t what every song or every challenge needs — but it sure does make great television.

Teleport Us to Mars!! Here Are Some Random Thoughts.

+ To be honest, every lip sync I watch I’m chasing the high of Raja and Carmen.

+ This episode was the most I’ve liked Daya, but during Untucked the other queens do confront her about her attitude. She says “she just says what she’s feeling” and, like, I love direct communication but tact is also important! You don’t have to say every feeling out loud!

+ They talk about missing Kornbread and Kerri and, um, what the fuck is up with Kornbread not returning for season 15???

+ Jorgeous tells the other queens she’s nervous after seeing them all lip sync. But then in the confessional she says she was lying and she’s not nervous because she’s the best. Jorgeous!!

+ In her goodbye letter, Angeria tells Jasmine that she’s going to be a beautiful woman and it made my face turn into that one emoji. You know the one.

+ Queen I want to sashay: It’s a strong group but I’m fine with anyone leaving except Willow, Bosco, and Angeria

Drew Burnett has written 308 articles for us.