In 2017 it may have come to your attention that there are in fact a lot of not very good things happening. At the same time, it’s important to enjoy the smattering of quite excellent things that do continue to exist, and I think we both know that I’m talking about roller derby.

Roller derby, for the unacquainted, is a sport in which women travel in circles, strategically hitting one another or not being hit by one another. I’m fairly certain that’s the most concise explanation of the game ever crafted, but if you don’t trust my description I encourage you to go watch a game in your own municipality and see for yourself!

Now that you’re up to speed, we’re going to talk to you about roller derby, which is objectively the Best Thing. My futurewife Evie, who skates under the name Raven Von Kaos, joined the sport in Santa Cruz back in 2007. She now plays roller derby here in Portland on a Rose City home team. I, Taylor, watch very many hours of roller derby and look at very many stats, which is like playing a sport but with numbers instead, for people who are bad at having fun.

Truly, supporting roller derby is just about the queerest, feministest thing you can do, and it’s at least part of the reason that we flew across the country to Philly last weekend to watch the Women’s Flat Track Roller Derby Association (WFTDA) championships, which we will hereafter simply call “champs” because that is what it is called.

On to champs! We took a red-eye from Portland on Thursday night, got in Friday morning and basically went straight to the venue and blissfully, sometimes stressfully, watched derby for the subsequent 72 hours, switching hats and bandanas approximately 3-7 times per day based on who we were cheering for. 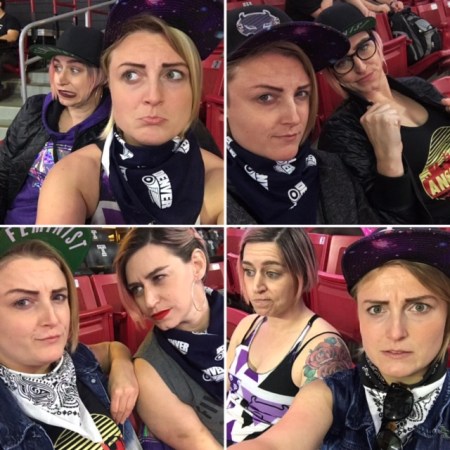 This was probably all in a 24-hour span.

2017 proved to be a huge year for the sport in a number of ways that played out thematically over the weekend. Example: If the world ends in a paroxysm of nuclear fire, this will be the last roller derby championship ever! But happily, many other notable things about champs this year have less to do with planet-rending warfare. On to those!

Cheering for literally everyone

There are definitely skill clusters within the top 12 teams that compete at champs, but all of those teams are incredibly talented and they all have really different things going on. For me, it was fun to get to see teams that I hadn’t seen play much this season.

Teams like Crime City, Minnesota, Arch Rival and even Gotham don’t make it out to the West Coast games we usually watch, so seeing them in action was exciting! Many of the teams in the top 12 are pretty evenly matched but bring different styles of play to the game and those differences in gameplay and how they neutralize or overpower one another tend to be the most interesting thing for me.

As the skill level goes up across the board, every team is fun to watch and any bout could end unpredictably — just look at Saturday’s Texas/Gotham nailbiter (145-148). Roller derby is becoming less of a sport in which one team dominates year-to-year and that’s just another sign that the game is all grown up.

E: Out of the games we saw I really loved the Denver vs. Angel City match up and the London vs. Montreal game. These are teams that are similar in skill level so it’s really fun to watch them compete.

T: As a big Angel City fan, I did a significant amount of pouting when they went down 166-196 to Denver. The funny thing is that I’m also a big Denver fan, which Evie pointed out to me, but I was too busy making dejected faces to come to reason. That’s the great thing about derby, honestly. Every team offers something to love and hearing people cheer for both teams or even earnestly cheering for roller derby itself is a thing that happens. We can probably chalk that up to derby being a sport mostly built by the ground up by women, many of whom are queer.

Derby matures but holds on to what makes it special

In 2017, roller derby is all grown up (it’s on ESPN, after all!) — but not too grown up. The sport is mature enough to have developed into an incredibly deep, strategic game, but it’s young and queer enough to still be really ridiculous in the best way. There were plenty of these moments in Philly, including but not limited to a cameo by that giant inflatable dinosaur that’s very in this year, skaters hanging onto excellent derby names like Catch Mikachu, Space Invader (cute glasses btw) and Satan’s Little Helper (Satan for short), Denver’s top-notch Twitter live-gif game, and an impromptu dance session on the jam line between Denver and Gotham right in the middle of a tense bout.

“I think a lot of people would agree that one of the best moments of the whole tourney was when Gotham and Denver broke into dance toward the end of their game. What I loved about this moment is that these are two teams that have played each other four times this season. FOUR TIMES. It was very cute, fun and a well earned moment for these two teams at champs. It also reminded me of some of my old school moments of dancing on the jam line, but like, on an ESPN level. ”

One of the raddest things about derby is that it’s complicated. That complexity means that there are a hell of a lot of ways to play the game and no single strategy, style or even body type dominates. The best teams play together, but following players who pop out of the pack for their skill, innovation, and strength is a lot of fun too.

We both left champs ranting about derby icons and up-and-coming players alike so naturally we had to make Derby Crush lists and fight about it:

And of course shoutout here to some universally well regarded superheroes of the derby world like Scald Eagle, Brawn Swanson, Bonnie Thunders, Loren Mutch and many others— y’all are just so good… what’s the deal with that?

Evie clarifies: “I def have derby crushes at Rose City, but am opting to not ruin my semi-aloof supporter-of-my-peers vibe.” Good call.

Roller derby’s showdown of the fiercest and finest included four teams based outside of the U.S. (Montreal, Victorian, London, Crime City) — and one of those teams took the whole dang thing! With a major 2017 playoff game hosted in Malmö, Sweden and a massive international presence in the high stakes bouts, derby has truly evolved into a global game. While it’s sad to see the trophy leave Portland after two consecutive hard-fought Rose City wins, the fact that it’s headed to Australia is pretty remarkable. Watching new roller derby dynasties form on other continents is pretty fucking cool.

Something IDK this way comes

We’ve talked about plenty of themes from Champs this year, but now it’s time to talk about the final game: the big showdown between Portland’s Rose City Rollers and Australia’s Victorian Roller Derby League (VRDL). As someone who watches Rose City play regularly, it was difficult to imagine how anyone could take down a fully developed Rose at the end of the regular season. It’s worth noting that VRDL has beat Rose two years in a row in a mid-season tournament game, but both teams have months to tighten and develop moving into Champs. 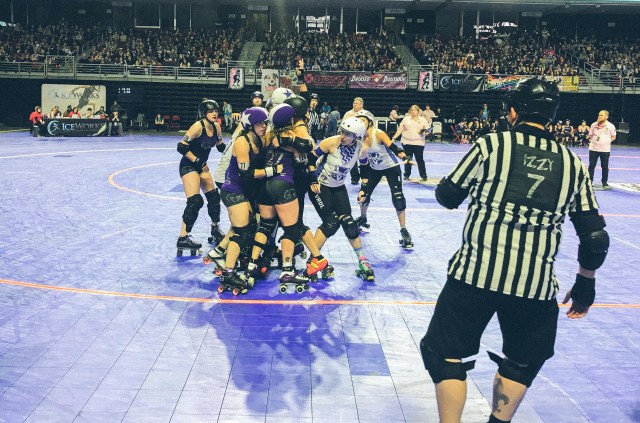 E: VRDL is the only team Rose has lost to over the last couple years – I went into the VRDL game with the thought that it was a very real possibility that Rose could lose the Hydra [roller derby’s funny twisty metal trophy].

T: Acting the part of a True Believer and clad convincingly in purple, Evie did not voice these concerns at the time.

Going into the final game, I just couldn’t envision a scenario in which a team could best Rose’s wildly talented blocker lineup or its deep jammer bench, especially after such a commanding game against Gotham the night before. Portland is my favorite team to watch but since I tend to kind of cheer for everyone I remained open to this idea!

E: Having been a derby watcher for a long time, I used to get so excited for playoffs and champs. That was when the top teams would unveil the next new thing, whether it was knee starts, “stroller derby” or one of the millions of small things we all just do now.

T: Well, unveil they did. VRDL kicked off the final game by taking lead in 8 out of the first 10 jams. That set a dominant tone that VRDL maintained, ending the half up 99 to Rose’s 32. Rose perked up a bit in the second half, getting lead 35% of the time (compared to just 24% in the first half) and putting up about twice as many points, but VRDL stayed the course. The most confusing part is that VRDL made their commanding performance look effortless and that’s no small feat against a team that no one else can even touch. In the end, VRDL maintained control of the entire game, beating Rose 180-101.

E: I think over the last few years there have not been too many WFTDA rule changes that have opened the door for loopholes leading to new strategies. I totally get that teams are always innovating year over year, but it’s been a second since a team caused the entire, global derby community to stop and all say “WTF?” like they did after Sunday’s game. What happened? How did VRDL not just win champs, but win in such a decisive way? VRDL straight up bested Rose (and it pains me to say that).

T: Yeah, that’s what was so mind-blowing. It was hard to even figure out what was happening as it all went down.

E: The Rose loss hurts, but I’m excited to see what’s next for derby! I feel like we witnessed the next big jump in the sport on Sunday. It’s not about a particular start, offense play or a new technique (although those are all important things to keep evolving), it’s about playing to a specific opponent. VRDL created strategies and plays that it saved for the game, and that counted.

T: Definitely. They had an answer to everything. Usually I don’t like watching VRDL that much because they play a very defensive, controlled, war of attrition style game. How did VRDL totally neutralize Mutch, one of Rose’s biggest scorers, on the outside line? What magic kept their jammers upright and in bounds, even when physics seemed to suggest otherwise? How did they stride by Rose’s killer blocking lineups right off the start? IDEK. This was a different VRDL than we saw throughout the rest of the tournament and a very different, much more aggressive team than we saw last year, even. And their jammers! Like… what even.

All told, it’s a paradigm shift for a sport that’s maturing really quickly, right before our eyes and it’s going to make 2018 that much more exciting. Much like Bitcoin, Beanie Babies, or the musical Hamilton, you should really get in on the ground floor to watch while this thing takes off.